Accessibility links
Obama Enters The Heated Battle For Virginia's 5th The president will stump for Tom Perriello, who is trailing behind Republican Robert Hurt in polls.

President Obama will stump in Virginia on Friday for a vulnerable freshman congressman: Democrat Tom Perriello.

From 'It's All Politics'

Analysis: Why On Earth Is President Obama Going All-In On Tom Perriello? Oct. 28, 2010

It's the only public campaign event the president is doing for just one House member.

Perriello squeaked to victory in 2008 in Virginia's conservative 5th District, which also voted for John McCain. And he won by the narrowest margin in the country — just 727 votes.

Polls show Perriello trailing his challenger, Republican state Sen. Robert Hurt. The national parties — and outside groups — have been spending like crazy on the race.

Virginia's 5th District is a sprawling wedge in the middle of the state, stretching from north of Charlottesville all the way down to the North Carolina border. 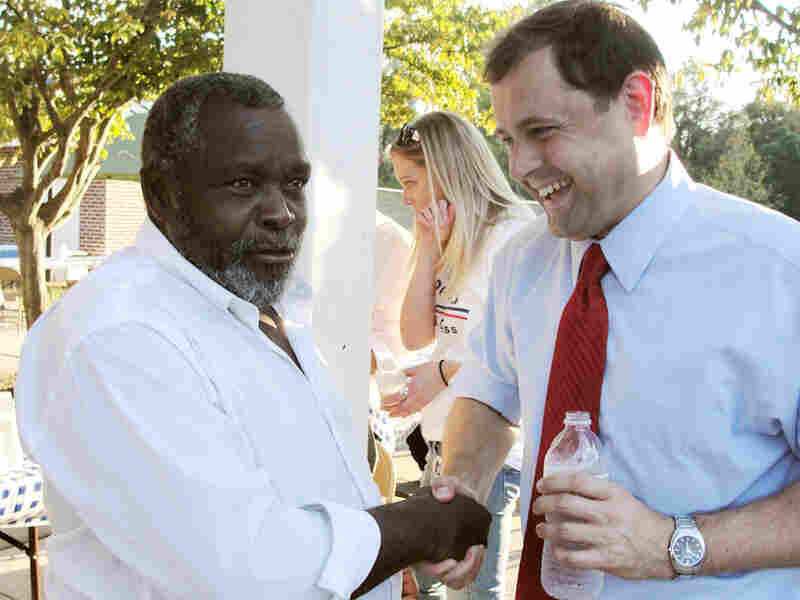 At midnight on Monday, the incumbent, Perriello, set out on a 24-hour campaign spree across the district. He greeted late-night truckers and steelworkers. He got a haircut, and he worked the coffee machine with a barista at Baine's Books and Coffee in Appomattox.

You could imagine he was a little squeamish about being seen brewing a fancy latte when his message is aimed at the working and middle class.

"We know every day, there are individuals and families out there that are struggling, working late-night shifts, working two shifts just to be able to support their family and make it through the day," he said. "And part of what we've tried so hard to do is to make it a little easier to get by in the 5th District — whether that's tax relief or helping to weatherize homes or helping to make college more affordable."

After he met with veterans and students at Longwood University in Farmville, Perriello spoke to NPR.

See Political Junkie Ken Rudin's forecast for the race in Virginia's 5th District and in other House, Senate and governor races around the country at NPR's Election Scorecard.

"The Republicans, to be honest, have the better bumper sticker and the better 30-second spot, but we have the actual plan and work ethic behind it," he said. "And I think that people were saying, 'Hey, we're ready to maybe look at something else,' and looked at the Republicans and said, 'Wait a second, they're supporting the same exact stuff that got us into this mess.'"

'Is Obama On The Ticket?'

At a Perriello phone bank at the campaign office in Farmville, a sign on the wall reminds workers of that whisker-thin margin two years ago.

"In this election, the ground game is everything," says Lucas Brown, the regional field director for the Perriello campaign. "It's such a narrow margin that it's going to be all about turnout."

Joy Speakes, working the phones at Farmville headquarters, says when she was 12 years old — in 1951 — she joined a walkout at the segregated, all-black high school to protest atrocious conditions there.

The court case that followed ended up in the Supreme Court, as part of Brown v. Board of Education. Speakes is looking at this election — thinking about that history — and trying to tap into the excitement Barack Obama generated two years ago, as she talks to voters. 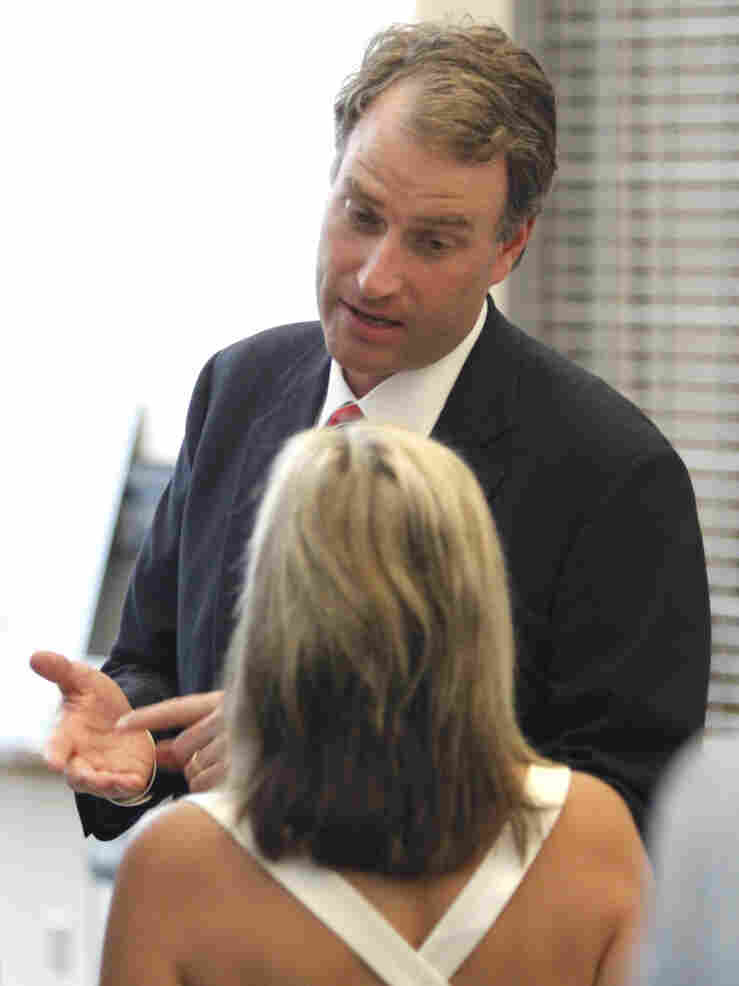 'They're Mad As Heck'

Not far away is the county Republican headquarters. It's front and center on Main Street in Farmville and painted bright red.

"There's a lot of interest out there in this particular election," says Paul Hoffman, the Robert Hurt campaign chairman for Prince Edward County. "I think a lot of people see the trend of the rampant growth of the national debt, the trend of much more intrusive government programs that interfere with their liberties — and their ability to live their lives the way they choose to live their lives — and they're mad as heck and they're not going to take anymore."

As for Tom Perriello running as an independent Democrat in 2008?

"Yes, he's bucked the system a little, but on the key bills of Obamacare, cap and trade, and the stimulus bill, he voted lockstep with the Democratic leadership in Washington," Hoffman says.

The Republican committee chairman for the county will be voting in his first election this year. Daniel Bradshaw is just 18 years old. He thinks the Virginia electorate this year will look far different from two years ago.

"We had voters come out in 2008 that had never come out before — and I highly doubt they'll ever come out again," he says.

'We're In The Short Rows'

As Hurt, the Republican nominee, greets a crowd of veterans in Danville on the southern edge of Virginia, he thanks a supporter and tells him, "We're in the short rows now."

That's tobacco-pulling talk: You start with the long rows in the middle of the field; save the corner for last.

Hurt was thanking Dave Newman — a veteran who served with the 25th Infantry in Korea. Newman wants a balanced budget, less spending and more jobs in this district, where there are pockets of unemployment of more than 20 percent.

"You know, I was raised in a Democrat home," he says. "My dad would have voted for that donkey they got if they hadn't run a person. And what's happened is, the party has left the people."

When Hurt talks to the veterans, he talks about a return to limited government, free enterprise and individual liberty.

Afterward, Hurt says Perriello has consistently marched with the Democratic leadership — and that makes him out of step with voters in Virginia's 5th District.

Right across Main Street from Yoder's company is Harlan Horton's law office. A Perriello supporter, he says the congressman is honest, works hard and comes to town often.

"I actually talked to Tom Perriello last Friday — he was in my office for a pretty long conversation. And I think there is some anti-incumbent sentiment, but I think Tom Perriello could actually stay. I mean, I think he might win."

But Horton does know voters who are flipping: They voted for Perriello two years ago, but are turning to the Republican this year.

Perriello has to hope that Obama's rally in Virginia on Friday will help him turn out enough voters to keep his seat.

Republicans are banking on just the opposite: that the president's visit will drive their voters to the polls on Tuesday to vote Perriello out.