Accessibility links
Highs And Lows From The 'Rally To Restore Sanity And/Or Fear' We look at some of the highs and lows of Jon Stewart and Stephen Colbert's big rally on the National Mall, from words forgotten to words painted in great big fonts on signs. 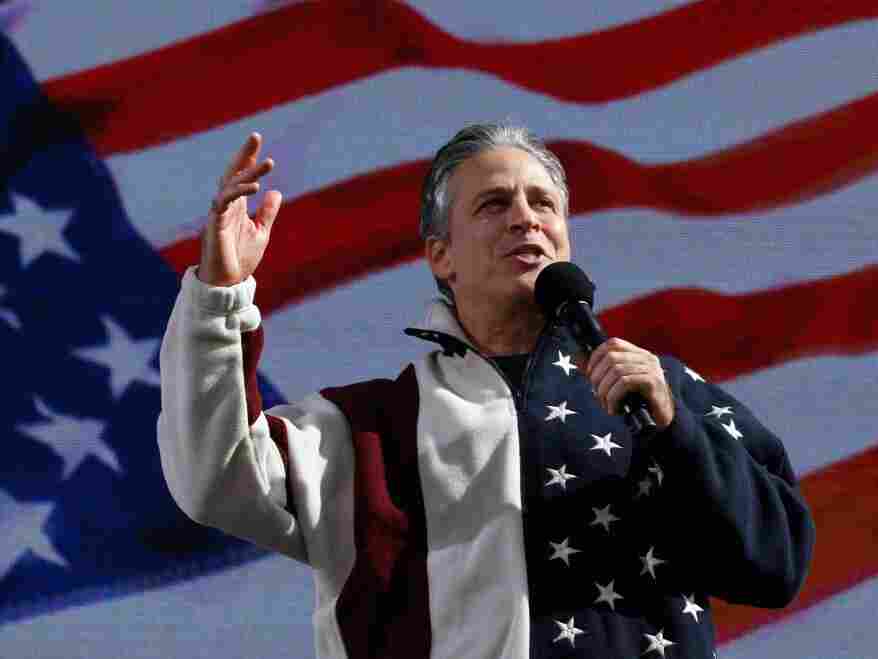 Jon Stewart speaks during the "Rally to Restore Sanity and/or Fear" on the National Mall. Chip Somodevilla/Getty hide caption

High: The Roots operated as the rally's house band, and just as they always do for Jimmy Fallon's late-night show (where they're the regular musicians), they elevated everything -- beginning with their performance with John Legend to open the rally.

Low: As great as The Roots are, the crowd seemed a little restless in the later stages of the 40 minutes of music that began at noon. It's not surprising, given that many had been standing around since 9:00 or 10:00. The band was great, but these people came to see Jon Stewart and Stephen Colbert, and 40 minutes of opener seemed like it was a tiny bit long for some.

High: The appearance of Adam Savage and Jamie Hyneman of Mythbusters (who came on after the band) was welcome particularly in that they gave the crowd things to do in the manner of experiments. We jumped to see if we could create a seismic wave (no), we measured to see whether The Wave (as in, "WOOOOO!" going around a stadium) traveled more slowly when only half the crowd did it (yes), and we made the sound of many thousands of people weeping (long story). While everybody was getting antsy, crowd participation was a very good thing at that particular moment.

Low: Stewart lost the crowd only once, and that was when he did a fairly big buildup to a massively important musical guest, who turned out to be ... Kid Rock. Sitting in the crowd, it was a little painful to hear the thud with which that announcement fell (I secretly suspected many thought he was going to say Bruce Springsteen, based on the intro). It's nothing against Kid Rock, but this was not a Kid Rock crowd, especially, or so the reaction made it appear.

It didn't help that during Kid Rock's number with Sheryl Crow, it was clear that Crow hadn't really learned the (pretty treacly) words about caring -- even the words to the chorus. It appeared from the peanut gallery that at one point, she lamented in song that she couldn't "stop the poor" instead of the intended "stop the war or feed the poor."

Signs We Saw At The Rally

High: Creative signage was the most reliably entertaining sight of the day. Some were simple ("THIS FONT IS BIG"), ("I Stand 4 Good Posture"), some called back to Stewart's and Colbert's jokes of the past ("Baby carrots might be GAY!!"), and some took a minute to fully absorb ("My wife is a Muslim and not a terrorist, but I'm scared of her anyway," "I thought Neil Young was going to be playing"). I also met a nearby couple in authentic Star Trek uniforms they informed me were custom-made in China. Their signs included "Legalize Romulan Ale" and "Fear Is Illogical."

Low: The sound system didn't satisfy those who were further back, who repeatedly sent up the chant "LOUDER! LOUDER!" toward the front.

High: Yusuf Islam, the former Cat Stevens, appeared to sing "Peace Train," which satisfied many of those in the crowd who were proudly waving their real live hippie credibility. (Which wasn't most of the crowd, but they were there.) Then Ozzy Osbourne came out for "Crazy Train," and that satisfied those proudly displaying their Black Sabbath credibility. (Again, not many, but some.) But later, when the O'Jays came out to perform "Love Train," it seemed to please everyone. I was just in front of the disability seating, which was at the edge of a closed-off street, so those who were watching in wheelchairs were the only ones who had much room to dance -- and several of them did.

Low: Just kidding, it wasn't really a low. But NPR was among the news organizations getting an award for fear for applying their rally policies to this rally and asking employees not covering it not to go. But it was presented as a blanket ban on any employee being there, which provided me with the unique opportunity to be at the rally to hear myself made fun of for not being at the rally.

High: Former JetBlue flight attendant Steven Slater recorded a refreshingly self-deprecating video in which he took a stand for reasonableness by stating that he could probably have handled his anger at a passenger better than he did when he ... well, you know, grabbed a beer, pulled the emergency slide, and jumped out of the plane.

High (again): Call me a sucker for a catchy tune, but even though Jon Stewart should theoretically never sing in public if we're going by ability, Colbert and Stewart's song "There's No One More American Than Me" hit the spot mid-rally. They got a particularly big response from the crowd for saluting their fellow Americans, "from gay men who like football to straight men who like Glee."

Jury's still out: Stewart's sincere speech at the end of the rally seemed designed, on the one hand, to give some purpose to the endeavor, which genuinely had, up until then, been almost entirely a comedy show and almost entirely apolitical.

But it was ultimately more reassurance than challenge, telling the crowd that they're all perfectly fine and need to do nothing different, because everything is fine except the media and pundits. (A community, that is, of which Stewart apparently doesn't see himself as a part, even when he takes 15 minutes to speak mostly seriously to many, many thousands of people about what's wrong with the country, which he says is ... pundits.)

High: R2D2 was there! To teach Stephen Colbert not to fear robots, because some of them are cute and nice! Come on, that's a high, right?