Accessibility links
Dog Food, Or Dogs As Food? Depends Where You Are In some cultures, Fido's the beloved family pet. Elsewhere, he's lunch. Psychologist Hal Herzog explores our complicated relationship with animals in his new book, "Some We Love, Some We Hate, Some We Eat." 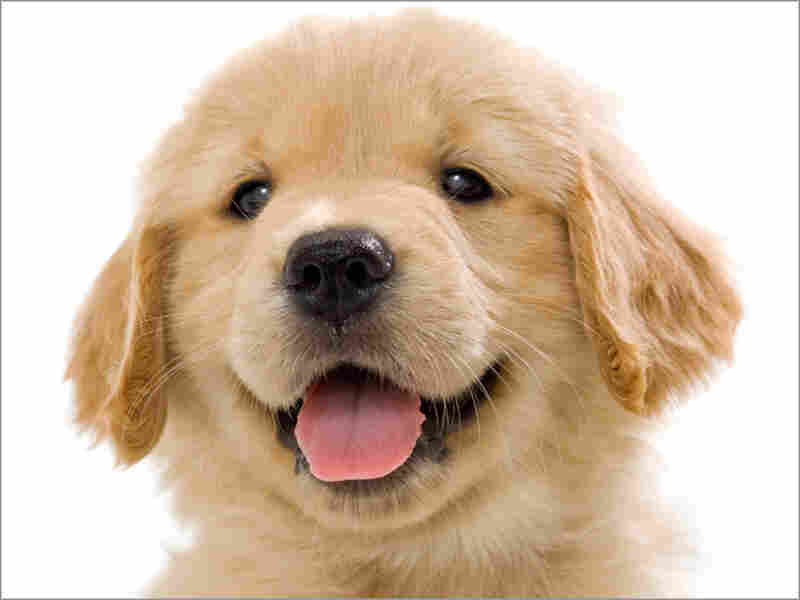 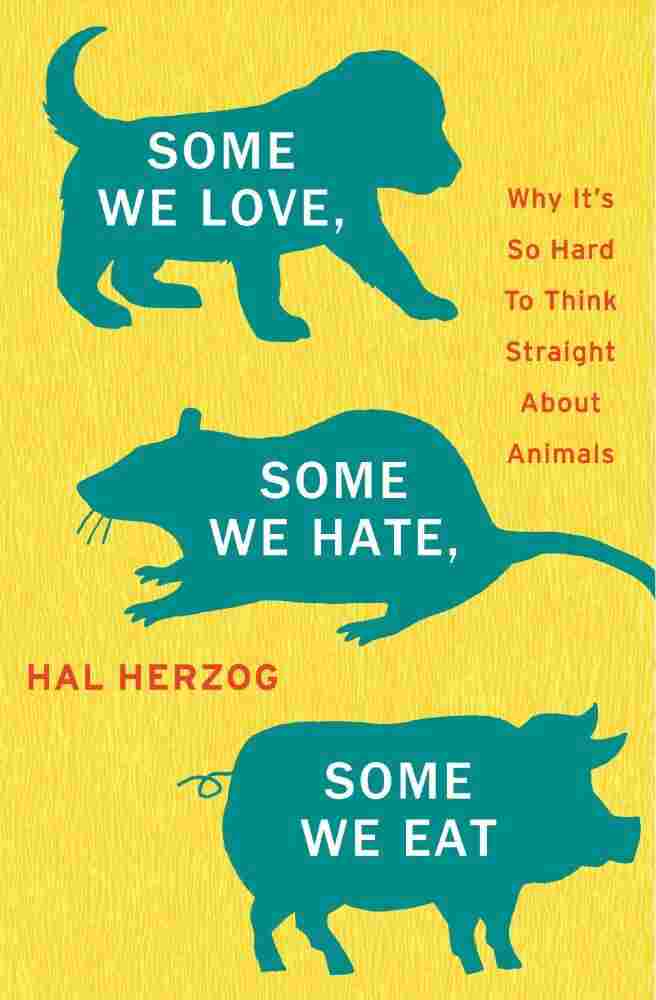 Some We Love, Some We Hate, Some We Eat: Why It's So Hard To Think Straight About Animals
By Hal Herzog
Hardcover, 336 pages
Harper
List Price: $25.95

How much is that puppy in the window? Well, it depends on where you are, and what you're planning to do with him. In the United States, he's likely to end up a beloved family pet... somewhere else, he could be lunch.

Pretty much the only generalization you can make about our relationship with animals is that it's complicated, says psychology professor Hal Herzog. His new book, "Some We Love, Some We Hate, Some We Eat: Why It's So Hard to Think Straight About Animals," explores that relationship from the farm to the table, and everywhere in between.

Herzog tells NPR's Guy Raz that both nature and nurture affect the way we see that hypothetical puppy in the window. "We have some animals in our homes, for example puppies and kittens, because they bring out our maternal and parental urges because they're so darn cute," he says. "The other thing is, it's not just that we don't eat dog, it's that the idea of eating dog is absolutely revolting... the idea of eating a dog is almost like eating a kid, it would be a form of cannibalism."

Herzog says that an animal's perceived cuteness can have a huge impact on how we feel about it. "There was a study done in Europe, and they found that the biggest single factor on how people felt about the protection of endangered species was how big its eyes were," he says. And that means pandas get loads of love, while the equally endangered Chinese giant salamander is left in the cold. "It's a hundred-pound, six-foot bag of brown slime with little beady eyes, but it's very very endangered. It's the world's largest amphibian, and deserves to be protected."

But Herzog says he no longer thinks this disconnect means we're hypocritical in our attitudes towards animals. "I stopped using the word 'hypocrisy' while I was writing this book," he says. "I think of it now as the human condition. And I think these issues really transcend our relationships with animals, they apply to so much of human moral life."

The Short Sad Life Of A Fast Food Chicken

Herzog doesn't shy away from the messier areas of that moral life. He devotes one section of the book to the underground phenomenon of cockfighting, and comes away with an uncomfortable conclusion: "A McDonald's chicken a suffers a much worse fate" than a gamecock, he tells Raz, "and I suspect you would be with me on this if I described the life of a game rooster and the life of a McDonald's chicken."

A gamecock lives for several years, often in pampered luxury, before it goes to its fate; a chicken destined for the plate lives about seven weeks, often in terrible, painful squalor.

"Now this is in no way to argue that cockfighting should be legal," Herzog says. "I don't think it should be legal. But on the other hand, it is a bit of a paradox that people get so bent out of shape about fighting roosters, and the suffering of chickens is probably the world's greatest animal welfare problem."

Countless studies have been done on the effects of human-animal interaction: can swimming with dolphins cure your autistic child? Does petting a cat bring your blood pressure down? Do pet owners live longer?

Just like everything in human-animal relations, it's complicated. "It depends on the way you ask the question," says Herzog. For example, dolphin therapy advocates make extravagant claims about the number of conditions that can be cured by a dip in the dolphin pool-- everything from autism to cancer, spinal injuries and Down syndrome. But Herzog says researchers really haven't found much evidence to back up those claims.

Some human-animal interactions are definitely beneficial: Herzog cites studies showing that bringing animals into nursing homes and prisons can improve morale. But surprisingly, it turns out that your family pet may not have a huge impact on your well-being. Herzog says he loves his own cat, Tilly, very much. But "there's really no evidence that in general, owning a pet makes people live longer," he says. "There's very little evidence that owning a pet makes people happier."

Excerpt: 'Some We Love, Some We Hate, Some We Eat'

Some We Love, Some We Hate, Some We Eat: Why It's So Hard To Think Straight About Animals
By Hal Herzog
Hardcover, 336 pages
Harper
List Price: $25.95

Why Is It So Hard to Think Straight About Animals?

I like pondering our relationships with animals because they tell a lot about who we are. –Marc Bekoff

The way we think about other species often defies logic. Consider Judith Black. When she was twelve, Judith decided that it was wrong to kill animals just because they taste good. But what exactly is an animal? While it is obvious that dogs and cats and cows and pigs are animals, it was equally clear to Judith that fish were not. They just didn't feel like animals to her. So for the next fifteen years, this intuitive biological classification system enabled Judith, who has a PhD in anthropology, to think of herself as a vegetarian, yet still experience the joys of smoked Copper River salmon and lemon-grilled swordfish.

This twisted moral taxonomy worked fine until Judith ran into Joseph Weldon, a graduate student in biology. When they first met, Joseph, himself a meat eater, tried to convince Judith that there is not a shred of moral difference between eating a Cornish hen and a Chilean sea bass. After all, he reasoned, both birds and fish are vertebrates, have brains, and lead social lives. Despite his best efforts, he failed to convince her that from a culinary ethics perspective, a cod is a chicken is a cow.

Fortunately, their disagreement over the moral status of mahi mahi did not prevent them from falling in love. They married, and her new husband kept the fish-versus-fowl discussion going over the dinner table. After three years of philosophical to-and-fro, Judith sighed one evening and gave in: "OK, I see your point. Fish are animals."

But now she faced a difficult decision: She could either quit eating fish, or stop thinking of herself as a vegetarian. Something had to give. A week later, friends invited Joseph to a grouse hunt. Though he had no experience with a shotgun, he somehow managed to hit a bird on the Ay, and, in grand caveman tradition, showed up at home, dead carcass in hand. Joseph then proceeded to pluck and cook the grouse, which he proudly served to his wife for dinner along with wild rice and a lovely raspberry sauce.

In an instant, fifteen years of moral high ground went down the drain. ("I am a sucker for raspberries," Judith told me.) The taste of roasted grouse opened the floodgates and there was no going back. Within a week, she was chowing down on cheeseburgers. Judith had joined the ranks of ex-vegetarians, a club that outnumbers current vegetarians in the United States by a ratio of three to one.

Then there is Jim Thompson, a twenty-five-year-old doctoral student in mathematics who was working on his dissertation when I met him. Before beginning graduate school, Jim had worked in a poultry research laboratory in Lexington, Kentucky, where one of his jobs consisted of dispatching baby chicks at the end of the experiments. For a while, this posed no problem for Jim. However, things changed one day when he was looking for a magazine to read on a plane and his mother handed him a copy of The Animals' Agenda, a magazine that advocated animal rights. He never ate meat again.

That was just the start. Over the next couple of months, Jim quit wearing leather shoes, and he pressured his girlfriend to go veg. He even began to question the morality of keeping pets, including his beloved white cockatiel. One afternoon Jim looked at the bird flitting around her cage in his living room, and a little voice in his head whispered, 'This is wrong." Gently, he carried the bird into his backyard. He said good-bye and released the cockatiel into the gray skies of Raleigh, North Carolina. It was a great feeling, he told me. "Amazing!" But then he sheepishly added, "I knew she wouldn't survive, that she probably starved. I guess I was doing it for myself more than for her."

Our relationships with animals can also be emotionally complicated. Twenty years ago, Carolyn fell head over heels for a 1,100-pound manatee. She had applied for a job -- any job -- at a small natural history museum in central Florida. The museum had an opening; they were looking for a caregiver for a thirty-year-old sea cow named Snooty. Carolyn had no experience working with marine mammals, but they offered her the position anyway. She did not know that her life was about to change.

On the phylogenetic scale, Snooty falls somewhere between the Creature from the Black Lagoon and Yoda. When Carolyn introduced me to him, Snooty hooked his flippers over the edge of his pool, hoisted his head two feet out of the water, and looked me straight in the eye, checking me out. While his brain was smaller than a softball, he seemed oddly wise. I found the experience unnerving. Not Carolyn. She was in love.

For over two decades, Carolyn's life revolved around Snooty. She spent nearly every day with him, even coming around to visit on her days off. Food was a major part of their relationship. Manatees are vegetarians, and Carolyn fed him by hand -- l20 pounds of leafy green vegetables, mostly lettuce, every day.

But life with an aging sea cow has its downside. Snooty adored Carolyn as much as she doted on him. When she and her husband would sneak off for a week or two of vacation, Snooty would get in a funk and quit eating. All too often, Carolyn would get a call saying that Snooty was off his feed again, and she would rush back to gently ply him with a couple of bushels of iceberg lettuce.

At some point, Carolyn gave up going on vacations. That's when her husband accused her of having her priorities screwed up, of loving a half-ton blob of blubber and muscle more than she loved him. 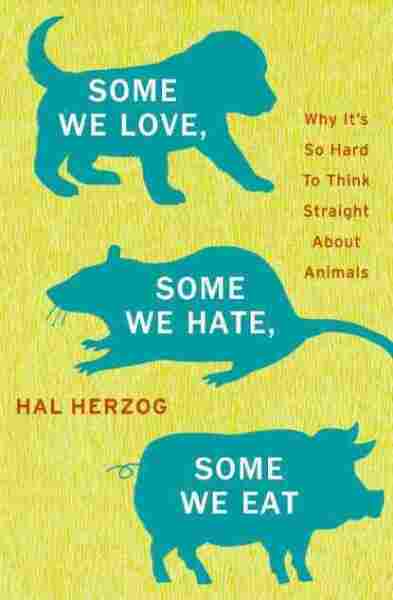 Why It's So Hard to Think Straight About Animals

Title
Some We Love, Some We Hate, Some We Eat
Subtitle
Why It's So Hard to Think Straight About Animals
Author
Hal Herzog