Accessibility links
And iPhone Makes Three: Marriage In The Digital Age The digital era has been a boon for romance — think online dating services. But when it comes to the rise of the attention-sucking smart phone, watch out. Marriage therapists are hearing an earful from spouses who say they're playing second fiddle to digital devices. 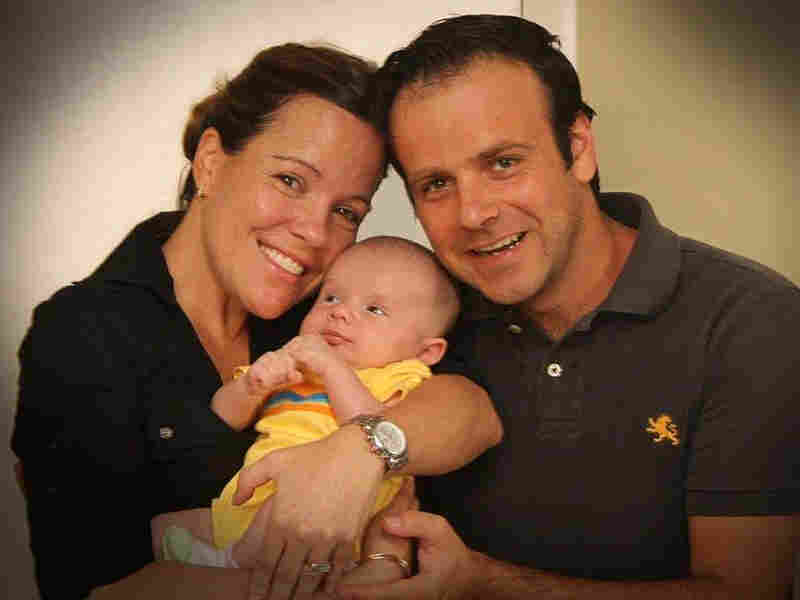 Carolyn and Sorin Popescu, with their daughter, Lina. After many arguments over Sorin's constant iPhone usage, the couple developed some ground rules. For example, Sorin now limits texting until after Lina's bedtime. Courtesy of the Popescus hide caption

toggle caption
Courtesy of the Popescus 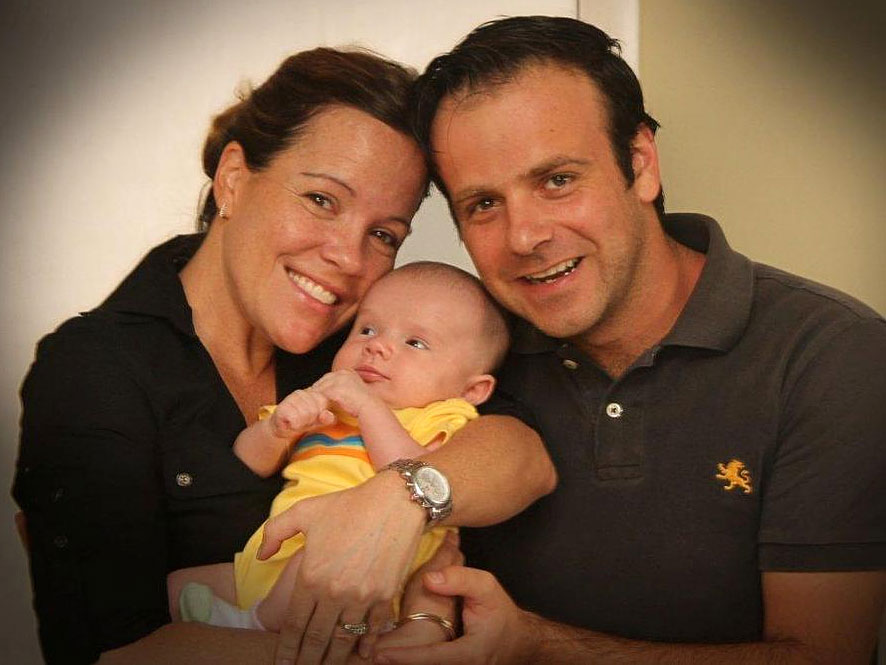 Carolyn and Sorin Popescu, with their daughter, Lina. After many arguments over Sorin's constant iPhone usage, the couple developed some ground rules. For example, Sorin now limits texting until after Lina's bedtime.

The digital era has clearly been a boon for romance. Online dating sites are a main way Americans now meet their mates, and smart phones and social media have revolutionized long-distance relationships.

But put spouses and their digital devices all in the same room and, well -- marriage therapists say they're hearing an earful about friction.

A typical scenario plays out in the South Florida home of Carolyn and Sorin Popescu. With dinner over and the dishes done, the couple might settle in to watch TV. It could be a cozy time to reconnect at the end of the day. That is, if Sorin didn't have to manage work e-mails on his iPhone -- again.

"I would make a reference to something on the TV," says Carolyn, "and he'd say 'Huh, what? Oh that's funny, yeah,' and put his head back down and keep typing. So, you miss a little bit of closeness that way."

Sorin can't avoid working evenings -- he manages staff in time zones around the world. Still, the couple have had spats over his iPhone use, including one heated beachfront argument when Carolyn threatened to rip the device out of his hands and throw it into the water. Still, Sorin says the problem didn't really hit him until their daughter, Lina, was born.

Can Social Media Break Up A Marriage?

"Carolyn would hold her up, talk to her, play with her," he says, "and I would be busy with my e-mails. And then by the time I would finish, [the baby] would be getting tired and falling asleep again."

For Marshall Crites in Portland, Ore., the constant distractions -- the ding ding ding of a text message's arrival -- at dinner, on weekends and while out drive him crazy.

Crites worries something is being lost. When they're driving somewhere, for instance, his wife will check messages. He knows she sees it as a kind of dead time, since he's behind the wheel. But "my contention is, 'Well, if you weren't on your phone, though, we would be talking!"

His wife contends that he's driving anyway and "my contention is, 'Well, if you weren't on your phone, though, we would be talking.' "

Then there's this scene from a 21st century marriage: Crites says he and his wife have the board game Scrabble and love it. But one recent evening "for about half an hour after we both went to bed, we were each playing Scrabble against computers on our cell phones. Her on her side of the bed looking one way, me laying on my back, both playing Scrabble."

He laughs at the irony but still finds the situation pathetic.

NPR used a Facebook query to find couples for this story — many thanks to the 1,100 people who replied. From that incredibly unscientific sampling, a few observations stood out:

Equal Opportunity. Complaints about overuse seem to come equally from both genders — something marriage therapists back up.

Buy Two. Couples seem to squabble more if only one person has a gadget. Some people's solution: Buy your spouse his/her own digital device.

Buyer Beware. The iPhone appears to be way more addictive than the BlackBerry. Many people wrote that in their spouse's hands, a BlackBerry wasn't so much of a distraction. But enter an iPhone, and it's been very tough to compete.

"The digital age hasn't introduced this problem, it simply gives us a more convenient means of checking out," says Tara Fritsch, a marriage counselor in Edmond, Okla.

Fritsch is hearing more and more clients complain about a spouse whose body may be right there but whose mind is off in cyberspace. Some say the best way to get their spouse's attention is to send a text -- from the next room!

Others complain that a spouse's late-night e-mailing cuts into their sex life.

"Closeness depends upon this rapidly disappearing phenomenon of undivided attention spread over time," says Edward Hallowell, a psychiatrist and co-author of Married to Distraction. Just think how hard it is to complete a work project amid a stream of interruptions, he says.

Hallowell advises clients to quash their Pavlovian response. Go to lunch, take in a nice dinner, and turn the BlackBerry off. Therapist Fritsch tells couples to show each other the same respect they'd give their boss.

"If your boss approached you and wanted to have a conversation with you," she says, "would you continue to surf the Net while talking to them? You probably wouldn't. You would have the respect and the courtesy to look away."

In Florida, the Popescus say they've made peace with technology at home after setting new ground rules. Sorin limits texting until after baby Lina's in bed. And Carolyn is allowed to interrupt Sorin on his iPhone three times a night. Doing so, she says, is all in the tone.

Sorin laughs that "stern" or "bossy" might be a better description. "I know when she's serious, let's just put it this way."