Accessibility links
Google TV: Networks, Cable Companies And Consumers Respond A look at Google TV, from how it works to how cable companies and traditional networks are responding to the threat to their business model that comes from an effort to bring consumers "the whole Web" on their televisions. 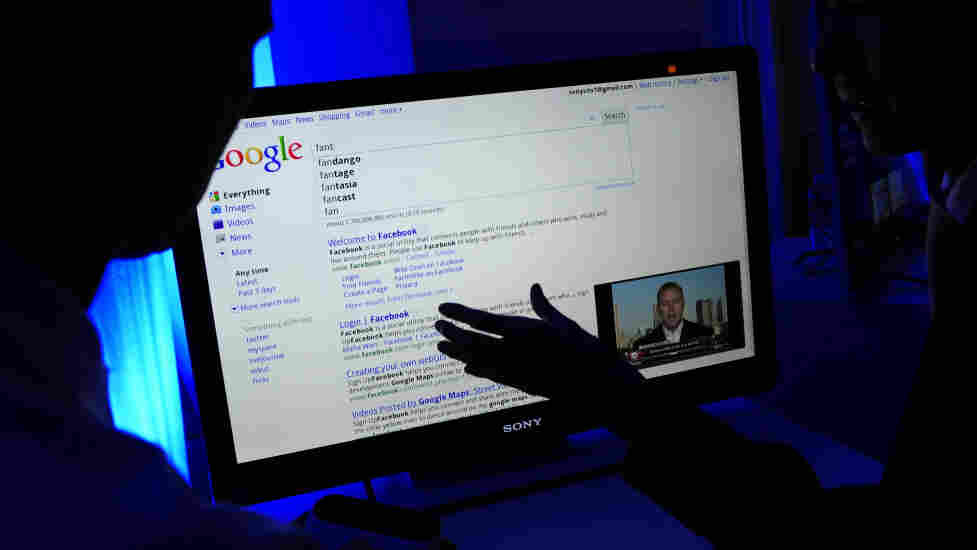 The number of ways to connect your TV to the Internet has been growing, but many people find that what's available isn't fully satisfying. There's the Roku Box, there's Apple TV, and there's watching Netflix through your Wii. But all those connections are walled gardens. They don’t provide full Internet access.

The same is true even of Internet-connected TVs from Samsung and others.  They do have applications that connect to Amazon, Netflix, and Yahoo, but the choices are limited. Now, one of the biggest brands on the Internet has gotten into the act: Google.

Rishi Chandra, part of the team that created Google TV, puts it simply: "We are trying to bring the whole web."

Chandra says, "What Google TV really offers is a way for you to seamlessly access all that great web content that is already out there today that you access on your PC or your mobile phone directly on your television."

But Google TV isn't without its own hardware hurdles -- to get it, you'll need a special Sony TV or Blu-ray player, or a standalone box built by Logitech.

On a recent visit to Google's offices in Mountain View, I sat down with Chandra and one of the Logitech boxes to see how it worked. He pulled out a very lightweight keyboard connected to the TV and pressed a button. A search box appeared on the screen.

"Anyone who understands the web understands this notion of being able to type in where you want to go, and we'll help you get there," he says as he types out a search for the spoof newspaper The Onion -- one of Chandra's favorites.  "The Onion actually has a great set of video content online," he tells me.

Chandra clicks on the link, and a list of Onion videos pops up. He clicks on one, and a mock-serious newscaster fills the 40-inch screen. Chandra and I sit back on comfortable chairs and laugh as the announcer says, "Just ahead, The Huffington Post has launched a new print edition featuring articles torn out of other newspapers."

Other fans of online video may find, as I did, that this is a vast improvement over sitting at a desk chair hunched over a computer. Of course, I was just getting a show from a Google employee.

Quentin DeWolf recently went out and purchased a Sony Google TV, and he says he loves it. He can sit on his couch and switch back and forth between cable TV and the Internet. "Fifty percent of the time, it's watching regular plain-Jane TV," he says. But the Google search engine brings up links to Internet sites as well as TV listings. "I do use its guide to find TV shows, and then fifty percent of the time I'm going to sites and watching video on those sites."

DeWolf says this is perfect for him, because there's programming he wants to see that he can't get on cable. "I'm a strange bird who's into a lot of things that the mainstream Americans are not," he says. "I like things like anime and European cars. All these things that there are lots of shows about in the world, but there aren't in this country."

But as much as he values access to those unusual choices, he isn't ready to turn off that "plain-Jane" cable connection either, because there's broadcast and cable TV he can't get online. And there's a reason for that: there are a lot of companies with with an interest in how you watch the Internet on your TV. Cable companies, networks, movie studios, Netflix, Apple, Amazon -- the list is long. And needless to say, they aren't all eager to help Google TV achieve its goal of providing television plus "the whole web."

In fact, the minute new-media giant Google connected to television, the old-media major networks got their backs up, and they responded. For instance, if you're on your computer and you go to ABC's web site, you can watch entire episodes of the highly rated Dancing with the Stars. But if you try the same thing with Google TV, it doesn't work. ABC has blocked that content from the service.

The problem for the networks, says Gartner analyst Andrew Frank, is that they can't make as much money from web broadcasts as they can from their existing arrangements with cable companies, which pay tens of millions of dollars a year for access to the networks' shows.

"That's what I think they believe is under threat from this so-called over-the-top model that connected TVs represent," says Frank.

And the threat doesn't rattle only the networks -- Frank says Google TV has cable companies worried as well. "The big fear for cable companies," he says, "is that consumers are going to start realizing that they can get a lot of this content online for free, or pay less in any case, and they're going to start cutting the cord, as they say."

Frank thinks one thing that might happen is that the cable companies will raise their rates for Internet connections as consumers start canceling their cable subscriptions -- as he believes they inevitably will.