Accessibility links
California Pushes To Uphold Ban On Violent Video Games California Gov. Arnold Schwarzenegger is asking the Supreme Court to uphold a ban on selling and renting violent video games to minors. Similar bans have been enacted in eight states, but have all been struck down by federal courts. 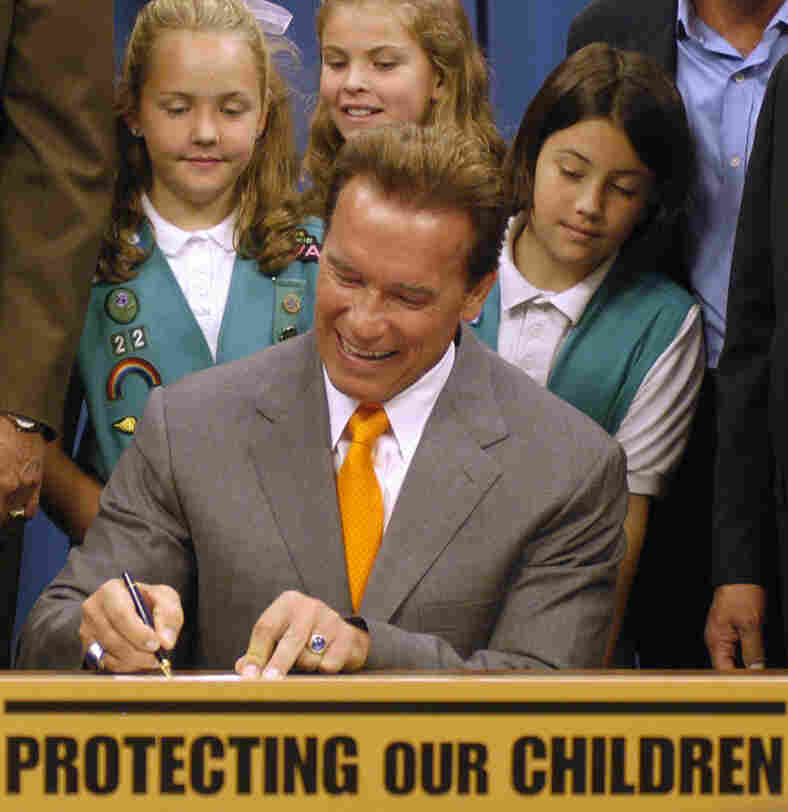 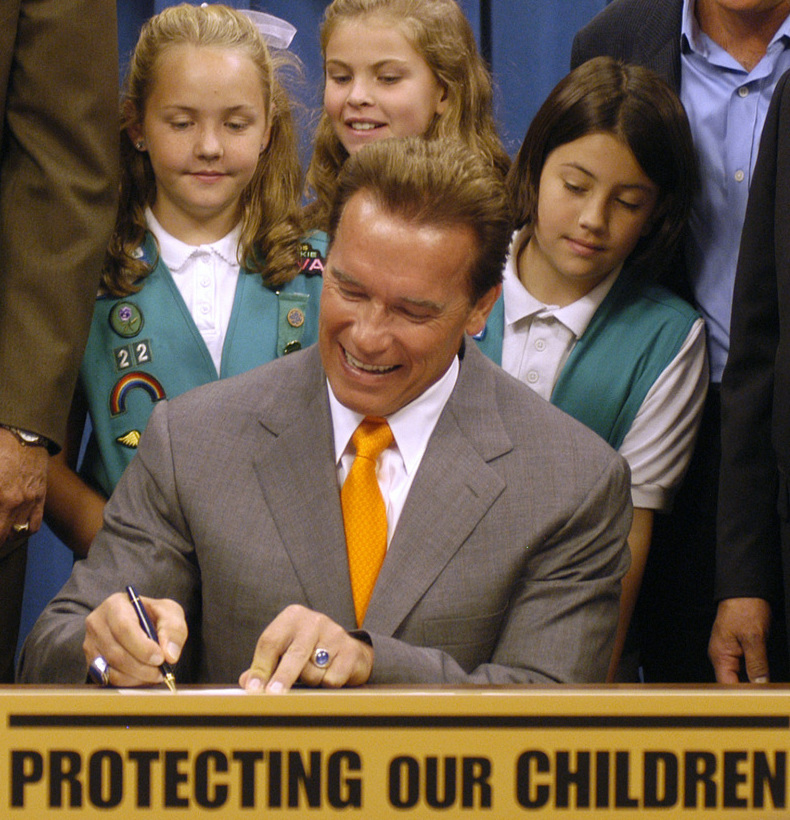 California Gov. Arnold Schwarzenegger signs AB 1179 bill restricting the sale and rental of violent video games to minors. On Tuesday, the governor will ask the Supreme Court to uphold the ban.

The U.S. Supreme Court hears arguments Tuesday in a California case testing whether states may ban the sale or rental of violent video games to minors.

There is a certain irony in the dispute. California Gov. Arnold Schwarzenegger, who made tens of millions of dollars portraying the Terminator and Conan the Barbarian, is asking the Supreme Court to uphold a ban on selling minors similar violent portrayals in video games.

And California is not alone. Such bans have been enacted in eight states. But so far, they've all been struck down by the federal courts.

The Supreme Court does not usually review disputes where there is no conflict in the lower courts, so the fact that the justices have agreed to hear this case suggests at least some of them may be ready to reconsider the way the First Amendment applies to depictions of violence, at least when sold to children.

The California law makes it an offense punishable by $1,000 each time a violent video is sold to a minor. The definition of a banned violent video is one that includes, "killing, maiming, dismembering, or sexually assaulting an image of a human being," in a way that is "patently offensive," appeals to a, "deviant or morbid interest" and lacks "serious, literary, artistic, political, or scientific value."

The law applies to stores and not to the fast-growing part of the business that is conducted online -- much of it through direct downloads.

As the video game industry points out, this is hardly the first time the government has tried to ban a new form of expression because it is seen as corrupting to minors. From dime novels in the 1800s to comic books and movies in the mid-20th century, each new form of popular entertainment has spawned efforts to limit its reach. In 1880, noted morals crusader Anthony Comstock wrote that minors emulate what they read in true-crime novels, with the result that, "our courtrooms are thronged with infant criminals -- with baby felons."

By the mid-20th century, motion pictures were the target. In 1952, the Supreme Court struck down a New York law that required movies to be licensed and allowed banning certain movies as sacrilegious. And in 1954, highly publicized hearings in the U.S. Senate highlighted the testimony of a prominent psychiatrist linking comic books to juvenile delinquency.

Now, in the 21st century, California is seeking to plow new legal ground by equating violent video games with pornography. The state contends that just as the Supreme Court carved out an exception to the First Amendment to allow a ban on the sale of sexually explicit material to minors 50 years ago, so too should it carve out an exception allowing a ban on selling violent video games to minors.

California State Sen. Leland Yee, a Democrat, sponsored the legislation. He contends that video games are different from violent movies, TV shows or books because video games are interactive. 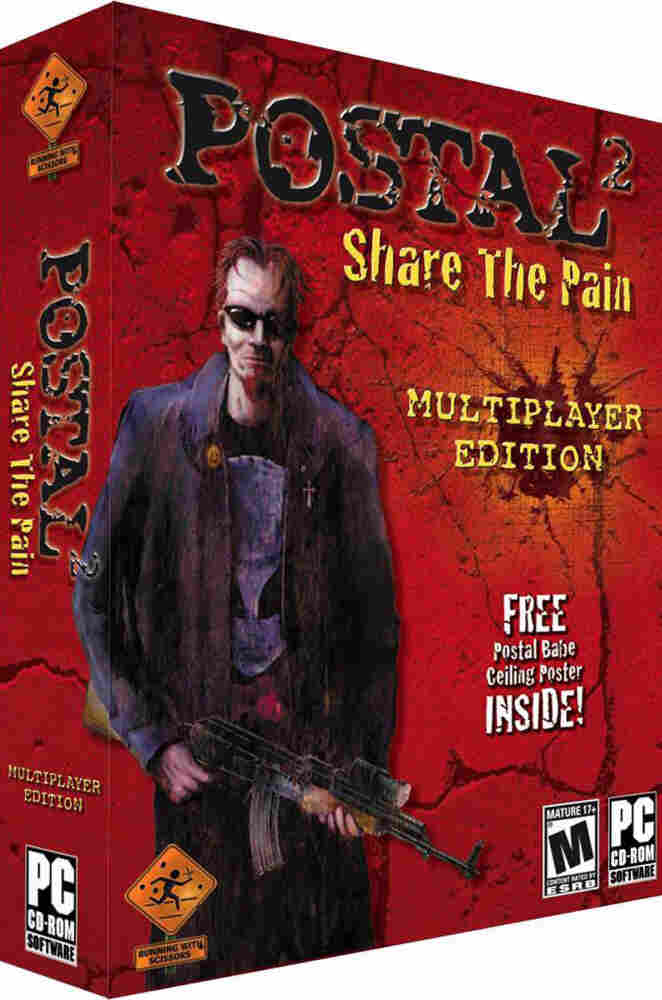 Postal 2 is the video game that California cites as an excellent example of why it wants to ban violent games. PRNewsFoto/Running With Scissors hide caption

He cites social science studies that he contends show kids who play these games for hundreds, even thousands of hours are desensitized to violence -- that in fact the wiring in their young brains changes, "because every time you push a button on that computer, you're lopping someone's head off," Yee says. "You're swinging an ax. You're pulling a trigger. You're using a sword or a knife and plunging it into someone's heart."

And he says that the techniques used in these video games are the same ones used in training police and military personnel to hunt down and shoot "bad guys."

He notes that every court that has looked at this question has found unpersuasive the studies seeking to correlate violent behavior and violent video games. In addition, he points to the industry's coordinated effort to make sure that violent video games are not sold to minors.

The industry has set up a board to rate the games and penalize manufacturers and marketers who violate the code. And he points out that when the Federal Trade Commission sent testers out to evaluate compliance with entertainment rating systems overall, the video game industry came in first, with the highest compliance rate -- 80 percent.

In addition, Gallagher says, most kids can't afford games without a parent's help. A game-playing console costs hundreds of dollars, and games typically cost $50 or $60 a pop.

For those who have not played one of these games, let's pause here to describe them. Postal 2 is the game that the state of California cites as the best example of why it wants to ban violent videos. The game invites players to burn people alive with gasoline, decapitate them with shovels, slaughter female zombies, beat people to death while they beg for mercy and worse, much worse.

But the figures are computer-generated, and the blood and gore is nothing like the grisly stuff you see on TV every night in prime time.

At the same time, many violent video games are based on Greek mythology, or great literature, like the Iliad and the Odyssey, or on epic World War II battles.

"If you look at the Lord of the Rings trilogy, something which I think is great and which people took their 8-year-olds to in vast numbers, there are huge battle scenes in which people's heads are chopped off and huge spears come crashing down on people, and thousands and thousands of characters are killed," says lawyer Paul Smith, who will represent the video game industry in the Supreme Court on Tuesday. "But everybody -- because it's a fantasy -- in our culture, thinks that is reasonably OK for most kids."

Sexual material, he says, is easily identifiable as outside the norm and taboo for children. Whereas kids from early childhood are regularly exposed to violence -- whether it's the Hansel and Gretel fairy tale in which the witch is burned to death in the oven or the Bible story of Cain killing Abel.

California Deputy Attorney General Zackery Morazzini replies that none of these -- from Greek mythology to Lord of the Rings to Bible stories to World War II battle plots -- would be covered by the California law if made into a game because of the qualifiers in the law.

"That material is not patently offensive," he says. "It doesn't appeal to a deviant interest, and it has serious literary, artistic and educational value."

"What constitutional values are served by an interpretation of the First Amendment that guarantees the video game industry the right to sell a child extremely patently offensive material with no socially redeeming value?" Morazzini asks.

Where Will It Stop?

The question remains, though, how to draw a line. After all, paintball games are far more realistic than video games, and nobody is trying to ban them -- a contradiction that Morazzini appears to concede. "I agree," he says ruefully. "Paintball is much more real, and it looks quite fun."

The video game industry has another defense for its games. It notes that most game consoles have a filtering mechanism that parents can set to prevent viewing violent games.

But Morazzini calls that defense laughable and notes that a simple Google search turns up 17 million hits that advise how to bypass parental controls.

Kids know how to get around these filters, he says, and a simple ban on sales to minors poses no danger to society's right to free expression. The California law, he says, doesn't ban video games. It just ensures that parents make the choice, not kids.

The video game industry, supported by every major media organization, from filmmakers to news producers like NPR, disagrees. They say that if California can ban the sale of video games to minors, why not movies, books or violence in news reports?

And once such bans are in place, producers will start censoring themselves for fear of a huge accumulated liability.

Listening to this debate Tuesday will be nine justices, ranging in age from 50 to 77, who may never have seen or played one of these games. However Gallagher says that two-thirds of American homes have one or more video game consoles; one-quarter of video game players are over the age of 50, and the average age of a video game player is 35. So, he concludes, "These games may be in the homes of more justices than you think."