Accessibility links
Fed Eyes 'Binge Bond Buying' To Spur Economy The Federal Reserve would buy hundreds of billions of dollars worth of long-term Treasury bonds mostly from banks. But instead of using existing money, the Fed would credit the banks' accounts, creating billions of dollars in new money with a keystroke. A decision is expected Wednesday. 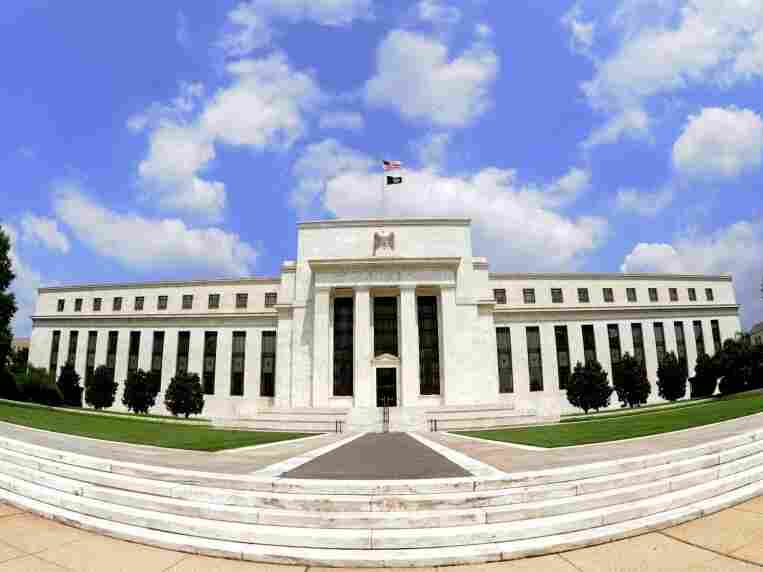 The question that's been occupying investors for weeks is whether the U.S. Federal Reserve will launch a new round of economic stimulus. Most Fed watchers think it's a done deal.

On Tuesday, the Fed's Open Market Committee begins two days of secret meetings; the results will be announced Wednesday afternoon.

When it comes to monetary policy, the Fed has two basic mandates: keep inflation in check and keep the unemployment rate low.

But, says Ken Kuttner, a former Fed economist and a professor at Williams College, inflation is below the Fed's comfort zone, and the unemployment rate is 9.6 percent, "so they feel they have to try something."

But the tool the Fed would normally turn to -- a short-term interest rate called the Fed Funds Rate -- has been at or near zero for a long time. You could say the Fed is out of bullets there.

"It is time to try something else, and unfortunately those something elses available aren't nearly as effective or as reliable as our standard gun," says James Hamilton, an economics professor at the University of California, San Diego.

Going On A Binge For Bonds

The something else the Fed appears to be loading into the chamber is called quantitative easing, or, as Kuttner suggests, the somewhat catchier "binge bond buying."

"Printing money to buy bonds," says Kuttner, would in turn "get interest rates down [and] juice the economy."

Just how this would juice the economy is up for debate.

Banks would have more cash on hand, though it's not clear they would use it to make more loans. If it works, interest rates would be lower for mortgages and business loans. All those dollars flowing around could deflate the dollar, making U.S. exports more appealing. Or it could be more trouble than it's worth, says John Taylor, a professor of economics at Stanford University.

"I don't think it will do much good, and I also worry about the harm down the road," Taylor says.

One possible impact is ballooning inflation years out. Japan tried it to get its economy out of a slump -- with mixed results. The Fed itself did a little of the same during the height of the financial crisis. Still, Taylor says, we're talking about a largely untested tool.

"Even the Fed admits this," he says. "They don't know what the impact is going to be, so that uncertainty itself creates instability."

But if there is still ammunition left to try, the Fed ought to give it a shot, says Hamilton of the University of California, San Diego.

He says it's a mistake to think that the Fed can turn the economy around by going on a bond buying binge -- but it could help a little bit.