Accessibility links
Latest Lighting Technology Hits The Market As the U.S. phases out incandescent light bulbs, Lighting Science Group, a small Florida-based business, is hoping consumers are illuminated by the advanced technology and energy efficiency provided by the LED light bulbs it manufactures. 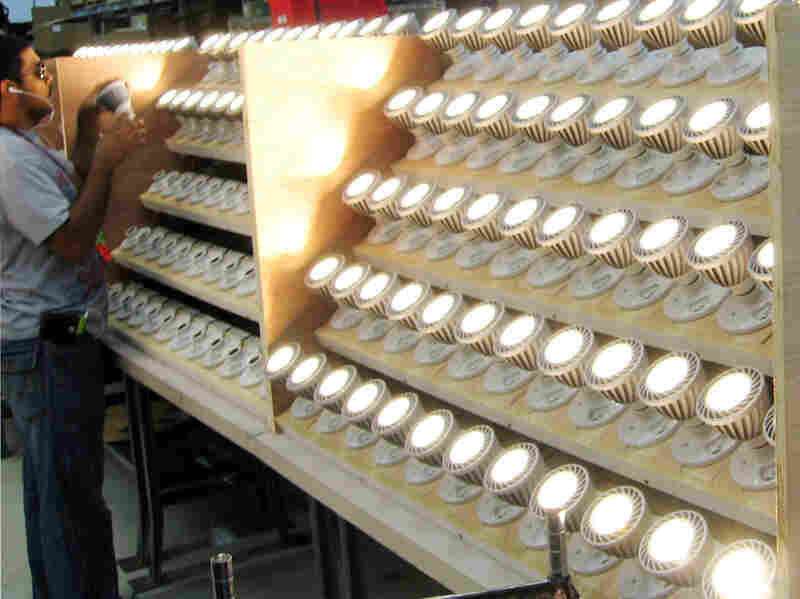 Lighting Science Group, a small Florida-based company selling its bulbs at Home Depot, is the first firm to manufacture an LED, which costs less than $20 and produces as much light as a 40-watt incandescent bulb. Greg Allen/NPR hide caption

It may be hard to believe, but in just a few years, incandescent light bulbs will be history. Under federal rules that take effect in 2012, they will be replaced by more efficient lighting technologies, such as LEDs.

Until now, the main alternative was compact fluorescent lights, or CFLs. Although they use just a quarter of the energy of incandescents, consumers have been slow to adapt them.

LEDs -- light emitting diodes -- have been around for decades. For many years, they were used mostly to illuminate buttons and meters in electronic devices. But in the last decade, researchers have successfully developed LEDs that produce white light comparable or superior to incandescents.

In the lighting aisle of a typical Home Depot store, LED bulbs are currently a small section among incandescents, fluorescents, CFLs and halogen. But that's about to change.

The Lighting Science Group, a small Florida-based company, is the first firm to produce an LED, which costs less than $20 and produces as much light as a 40-watt incandescent bulb. Zach Gibler, its CEO, says he's optimistic about its success.

The LED light is going to do more than just replace the incandescent, he says. "It's going to change the world."

Lighting Science Group received a federal EnergyStar rating, which makes it eligible for consumer rebates. And perhaps its biggest coup is that it's being sold by Home Depot, the nation's largest lighting retailer.

Within the next five years, Gibler and others in the industry estimate that half of all lights sold in this country will be LEDs.

"We can use as much as 80 percent less energy," he says, "and the product can last about 20 times longer than the technology it's replacing." 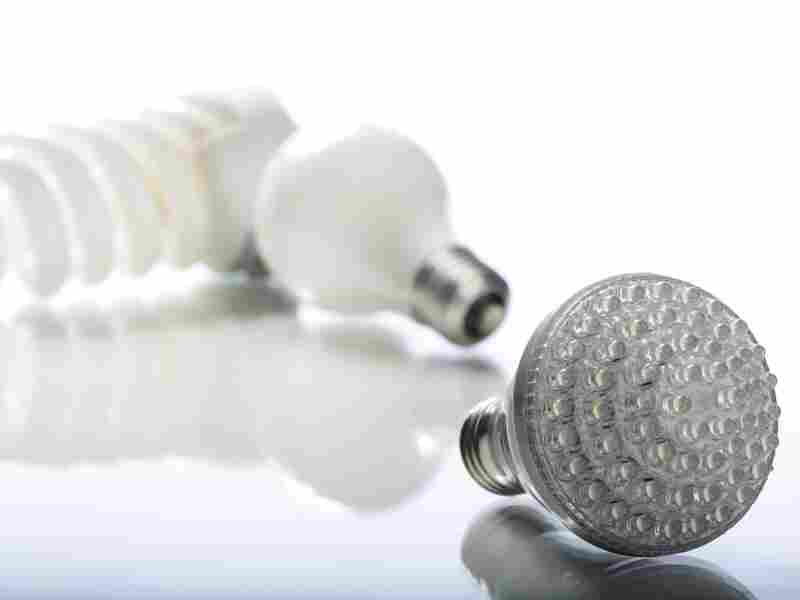 Lighting technology is moving from old analog bulbs and compact fluorescent lights to LEDs, which are more energy-efficient and have advanced technology that can help the bulbs adapt to their environment. iStockphoto.com hide caption

Brad Paulsen, associate merchant for light bulbs at Home Depot, says it's that quality which convinced the large retail chain to introduce a line of LED bulbs, even though the high price tag has limited consumer demand.

"The one thing I can say pretty confidently," Paulson says, "is that I think [the price] is going to come down pretty quickly over the next two to three years."

Nearly every lighting manufacturer, including large companies like Phillips and GE, is racing to produce its own LED products.

Gibler says it's not a coincidence that a small company is the first to the marketplace. An advantage of being small is that his firm can quickly retool and make design innovations part of its finished products. It also helps, he says, that the company's engineers, developers and manufacturing staff all work at the same location.

"From design to getting on a factory floor is measured in days," Gibler says of changes in new products. "Typically, that’s measured in months. And that's a huge competitive advantage."

The Future Of Digital Lighting

Last year, the Lighting Science Group had 90 employees. Today, there are 400, and the company's growth seems to be just beginning. The company plans to keep expanding its facility in Satellite Beach, and has made deals to open new manufacturing plants in Mexico and Asia.

Gibler's excitement about LEDs is not just about the technology's ability to light homes using less energy. He says that what's happened to entertainment, communications and information is now happening to lighting: It's going digital.

As lighting moves from old analog bulbs to LEDs, Gibler says lamps are suddenly becoming consumer electronic devices that can sense and react to their environment.

"Are you watching TV, are you having a cup of coffee, is the sun up, is the sun down?" Gibler says. "Lighting systems will be able to adapt to your environment in a way they couldn't before, because we're now using a semiconductor with a microprocessor that allows us to make it smart, just like your phone is."

LEDs may be similar to cell phones in another way, too. Manufacturers may eventually market LEDs with all sorts of enhanced features, such as security sensors, cameras or wireless communication.

Although these lights may last 20 years, as models improve, manufacturers are betting that you may want to upgrade to smarter LEDs long before they burn out.