Accessibility links
'Vast Ocean Of Stories' In Biography Of The Atlantic Today, people easily cross the Atlantic Ocean by plane and cavalierly refer to the great body of water as "the pond." But author Simon Winchester says we're forgetting the majesty of the high seas. He chronicles the second-largest ocean's origins, history and cultural influence in Atlantic. 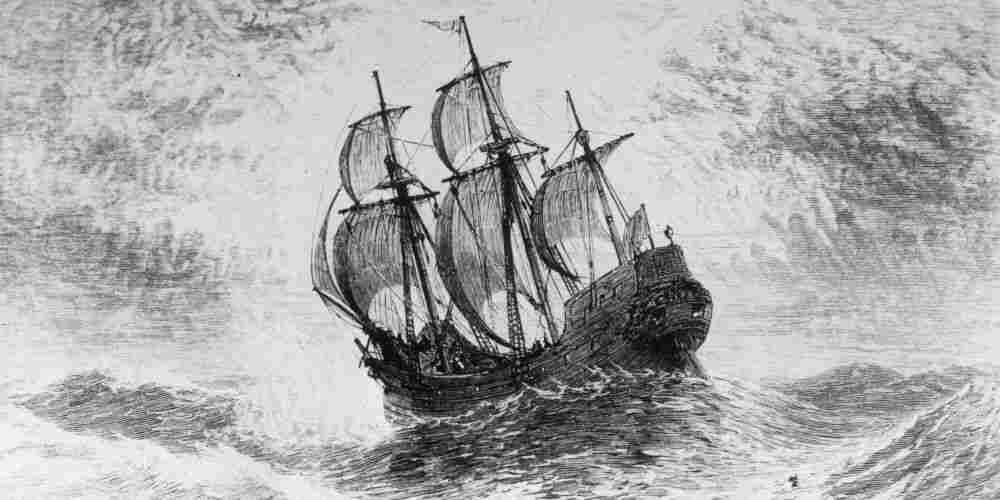 Today, people easily cross the Atlantic Ocean by plane and cavalierly refer to the great body of water as "the pond." But just a few hundred years ago, crossing the ocean was a terrifying venture. Above, a drawing of The Mayflower, which brought Pilgrims to the "New World" in 1620. Three Lions/Getty Images hide caption 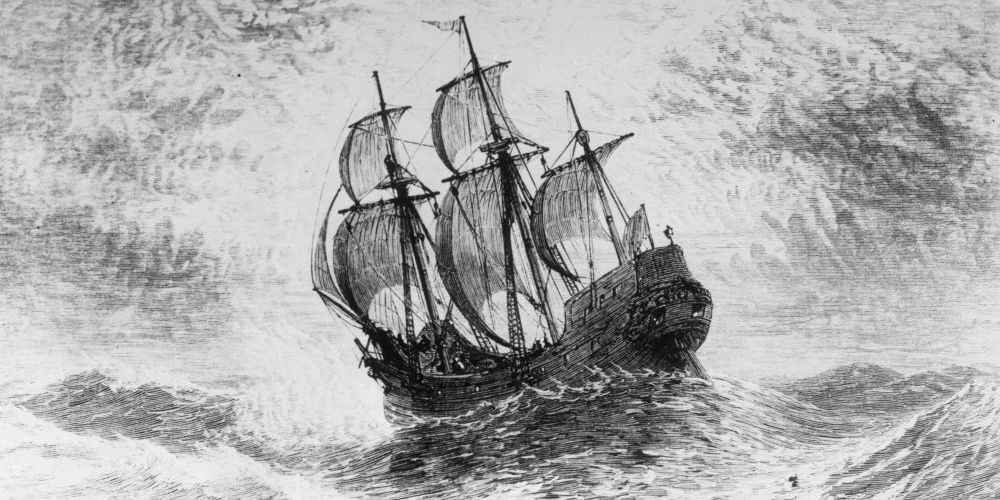 Today, people easily cross the Atlantic Ocean by plane and cavalierly refer to the great body of water as "the pond." But just a few hundred years ago, crossing the ocean was a terrifying venture. Above, a drawing of The Mayflower, which brought Pilgrims to the "New World" in 1620. 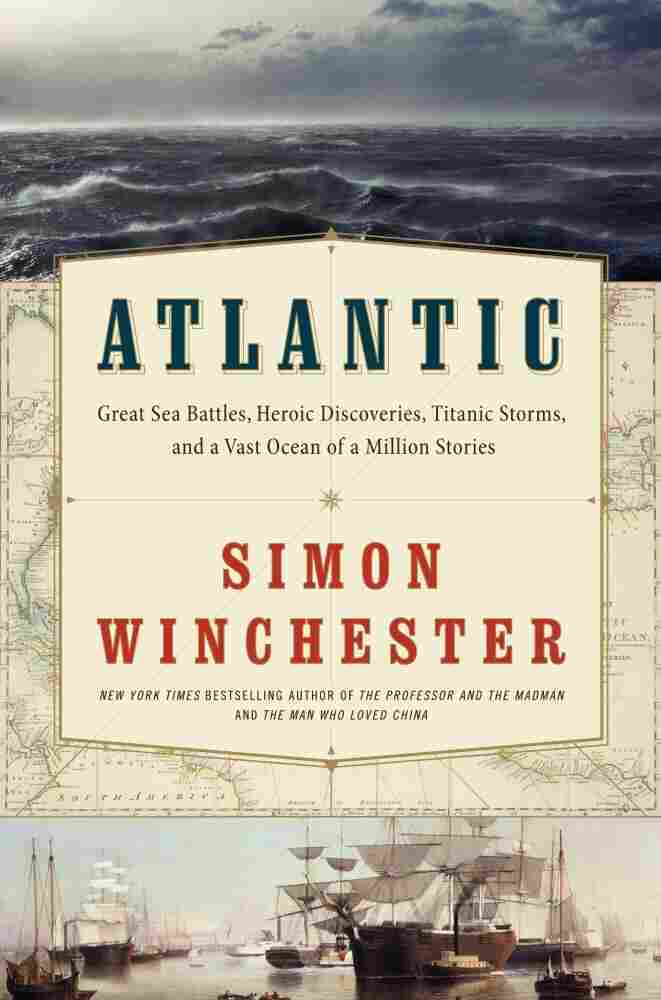 Simon Winchester has spent his life following his curiosity to far-flung corners of the world. And though he has crossed many oceans, the one that has made the greatest impression on him is the one that is closest to home.

The geologist, journalist and now best-selling author explores his love of the world's second-largest ocean in Atlantic: Great Sea Battles, Heroic Discoveries, Titanic Storms, and a Vast Ocean of a Million Stories -- a biography of the ocean that chronicles its origins, history and cultural influence.

On a recent autumn day, Winchester watches ships make their way up and down New York City's Ambrose Channel, which leads to the Atlantic Ocean. "This is really the gateway into and out of New York," he says. "You see a huge amount of traffic in and out all the time."

In New York City's harbor, ships laden with thousands of containers filled with goods of all kinds will end their long journey across the sea. Like Liverpool, Cape Town and Buenos Aires, New York is one of the world's great cities whose history is closely linked to the Atlantic.

While workaday container ships have replaced the great masted schooners and classic ocean liners of an earlier age, Winchester says that crossing the Atlantic and entering a harbor like New York's is still as romantic as ever.

"It's freighted with so much human history," he says. "So much tragedy, so much commerce, so much that is important in the story of  the development of human civilization. The romance of it lies in the stories that are told of and around it. I love it. Absolutely love it." 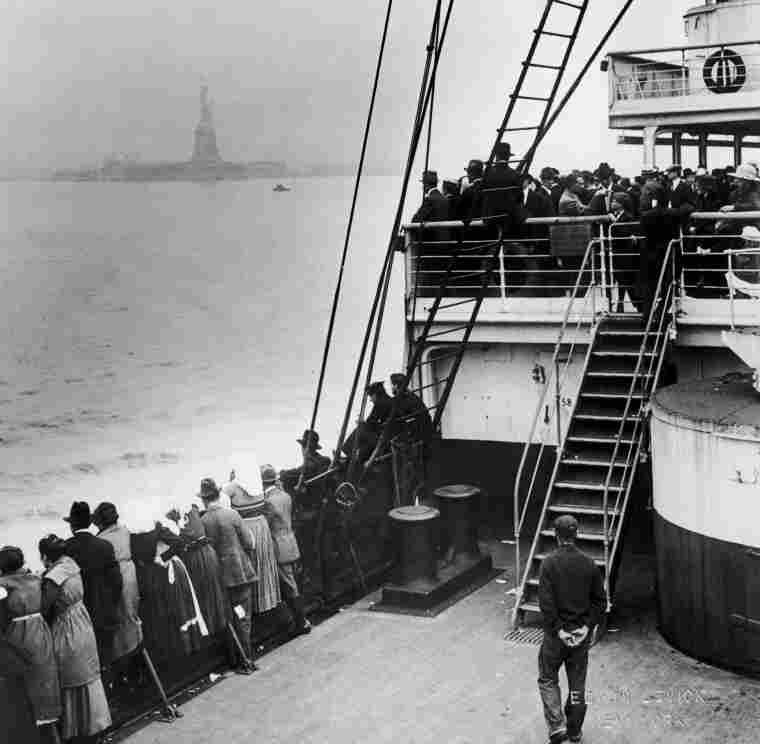 The Atlantic Ocean, Winchester says, is "freighted with so much human history." Above, immigrants get their first glimpse of the Statue of Liberty as they enter New York harbor aboard an ocean liner en route to Ellis Island. Edwin Levick/Hulton Archive hide caption 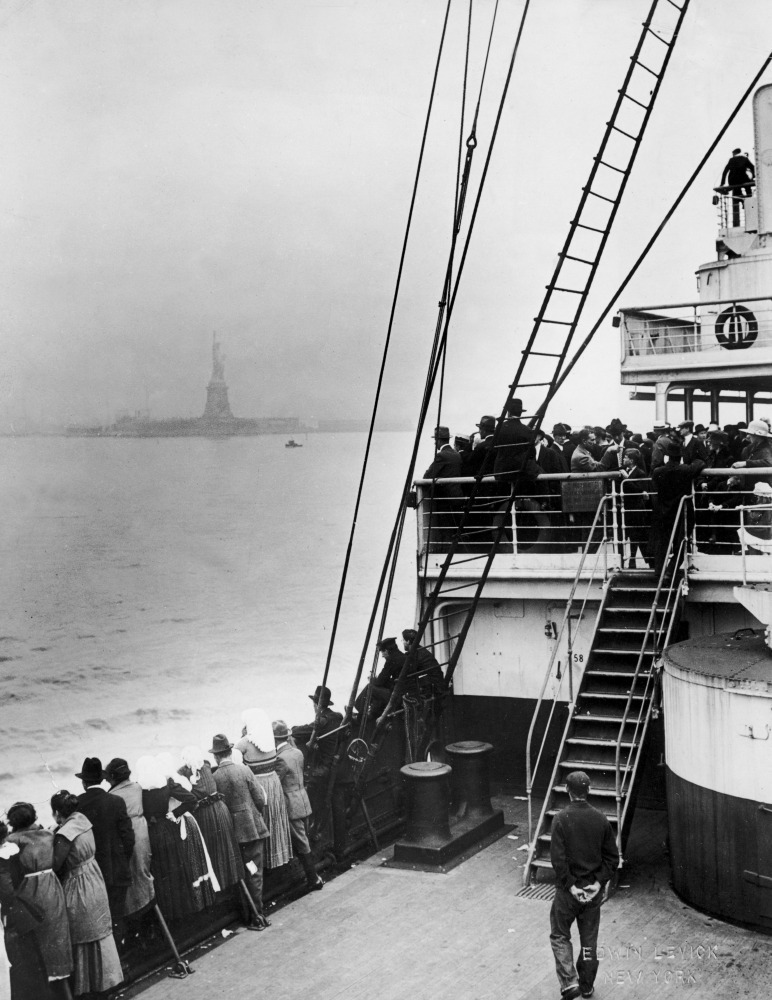 The Atlantic Ocean, Winchester says, is "freighted with so much human history." Above, immigrants get their first glimpse of the Statue of Liberty as they enter New York harbor aboard an ocean liner en route to Ellis Island.

The Atlantic played a particularly formative role in U.S. history through immigration -- for the ancestors of most Americans, the ocean was a treacherous passageway to a better life.  The boat stops and Winchester takes in the scene -- the bustling harbor, the skyline, the Statue of Liberty, and the elaborate towers of the processing center on Ellis Island, where millions of immigrants set foot in America for the first time.

"To me that's almost the most romantic of all the stories relating to the Atlantic Ocean," Winchester says. "Millions upon millions of people came here full of hope and aspiration to this extraordinary land of liberty and opportunity, and helped build the United States. So the Atlantic Ocean was absolutely critical to the story of America."

Winchester's own love affair with the Atlantic began with a passage to America. As a teenager, he crossed the ocean for the first time aboard a great, old ocean liner. He remembers the morning he woke just before dawn, hoping to get his first glimpse of North America. 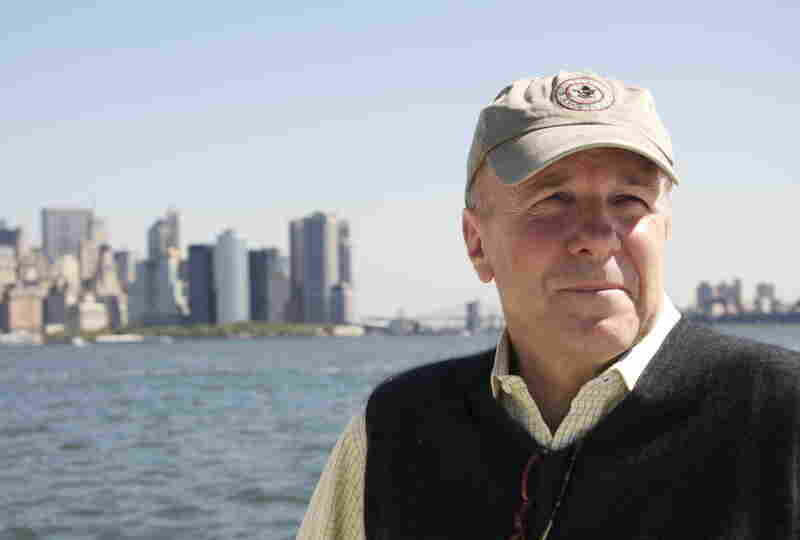 Winchester fell in love with the Atlantic as a teenager when he crossed the ocean to America aboard an ocean liner. Setsuko Winchester hide caption 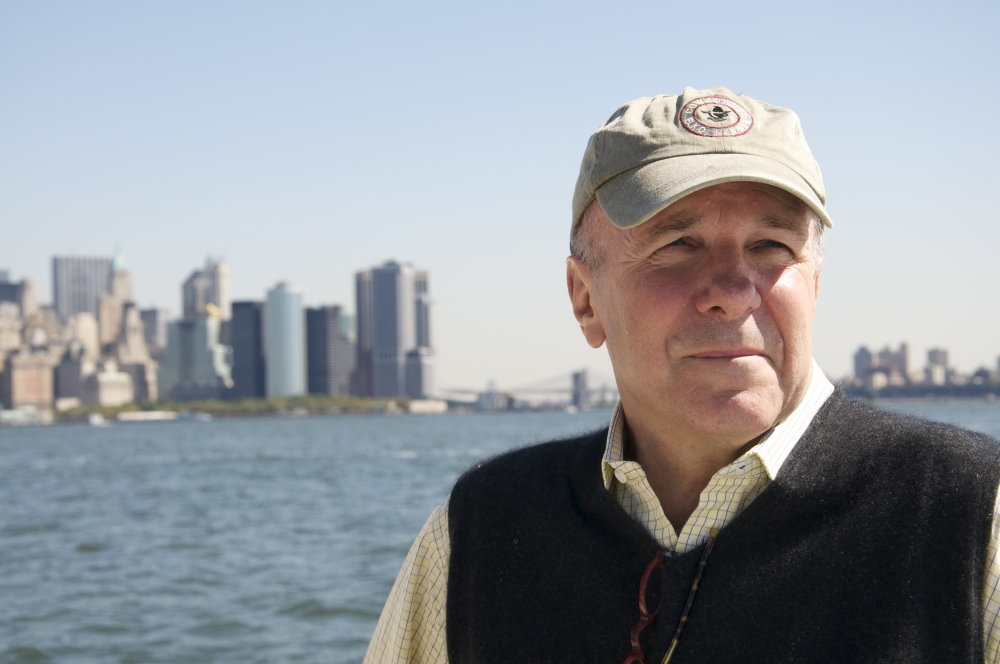 Winchester fell in love with the Atlantic as a teenager when he crossed the ocean to America aboard an ocean liner.

"I was alone at the very prow of the ship," he recalls, "in a sort of Titanic 'I'm king of the world' kind of moment, and we were hissing along on a relatively flat sea, when suddenly everything stopped. There was a clanging of bells, and the engines stopped, and the ship suddenly fell silent and glided to a halt, and all we could feel ... was the slapping of the water against the hull, and there was this terrible silence."

Suddenly a plane appeared and delivered a package of needed medical supplies to the ship. In that moment, Winchester says, he experienced a heightened awareness of his surroundings -- the enormous depth of the sea, the endless expanse of the sky, the power of the wind and weather. That sense of wonder comes through in his "biography" of the ocean:

The Atlantic is in most places not at all like the Pacific or the Indian oceans -- it is not dominated by the color blue, nor is it overwhelmingly fringed with leaning palm trees and coral reefs. It is a gray and heaving sea, not infrequently storm-bound, ponderous with swells, a sea that in the mind's eye is thick with trawlers lurching, bows up, then crashing down through great white curtains of spume, tankers wallowing across the swells, its weather so often on the verge of gales, and all the while its waters moving with an air of settled purpose, simultaneously displaying incalculable power and inspiring by this display perpetual admiration, respect, caution, and fear.

Winchester's sense of awe at the ocean is less common in an age when most people cross the Atlantic by plane and refer to the great body of water as "the pond."

"Just a few hundred years ago it was unimaginably terrifying to venture into [The Atlantic]," Winchester says. Now, you can make it from one side to the other in just a few hours. But when you are crossing it in a boat, Winchester says, "it is majestic. It is given to all sorts of caprices of wind and weather. It is terribly dangerous. It is beautiful, and it is not to be dismissed."

From The Purple Isles Of Mogador

At first the infant Mewling and puking in the nurse's arms

The Kingdom of Morocco has on its most widely used cur­rency bill neither a camel nor a minaret nor a Touareg in des­ert blue, but the representation of the shell of a very large snail. The shell of this shore-living marine beast -- a carnivore that uses its tongue to rasp holes in other creatures' shells and sip out the goodness -- is reddish brown, slender, and spiny, with a long spire and an earlike opening. It is in all ways rather beauti­ful, the kind of shell not to be idly thrown away by anyone lucky enough to find one.

Yet it was not the shell's curvilinear elegance that many years ago persuaded directors of Morocco's Central Bank in Rabat to place its image on the back of its 200-dirham bills. The reason for their choice, more befitting a currency note, had all to do with money and profit. For it was this curious sea creature that formed the basis of Morocco's fortunes, long before Morocco was an organized nation.

The Berbers of the desert were not mariners, nor were they especially interested in harvesting these snails and putting them to good use. It fell instead to sailors from far away, who came thousands of miles from the Levantine coast of the eastern Mediterranean, to realize the potential for using these gastro­pods to make a fortune. The great challenge would come in the business of acquiring them.

For the sea in which these elegantly fashioned beasts lived so abundantly was a body of water very different in character from the placid waters of the Mediterranean. The gastropods were generally to be found, thanks to complex reasons of biology and evolutionary magic, clinging stubbornly to the rocks and reefs in the great and terrifying unknown of the Atlantic Ocean, well outside the known maritime world, and in a place where traditional navigational skills, honed in the Mediterranean, were unlikely to be of much value. To harvest these creatures, any mariners of sufficient boldness and foolhardiness would be obliged to grit their collective teeth and venture out into the deep waters of the greatest body of water it was then possible to imagine.

But they did so, in the seventh century B.C. They did so by blithely setting sail past the Pillars of Hercules, the exit gates of their own comfortable sea, and out into the great gray immensity of the limitless unknown beyond. The sailors who performed this remarkable feat, and yet did so casually, were Phoeni­cians; they used sailing ships that were built initially only to withstand the waves of their familiar inland short sea but now had to tackle the much more daunting water of an unknown long sea beyond. There must have been something remarkable about the sailors, yes; but there must also have been something even more so about these particular North African snails that made them worth so much risk.

And indeed there was. First, however, it seems appropriate to set the snails to one side and consider the lengthy and neces­sarily complex human journey that brought the Phoenicians to Morocco in the first place.