Accessibility links
Counter Global Warming With Geoengineering? Some Say Wait Diplomats at a recent biodiversity meeting in Japan issued a moratorium on all geoengineering activities until the science is clearer and global regulations are in place. 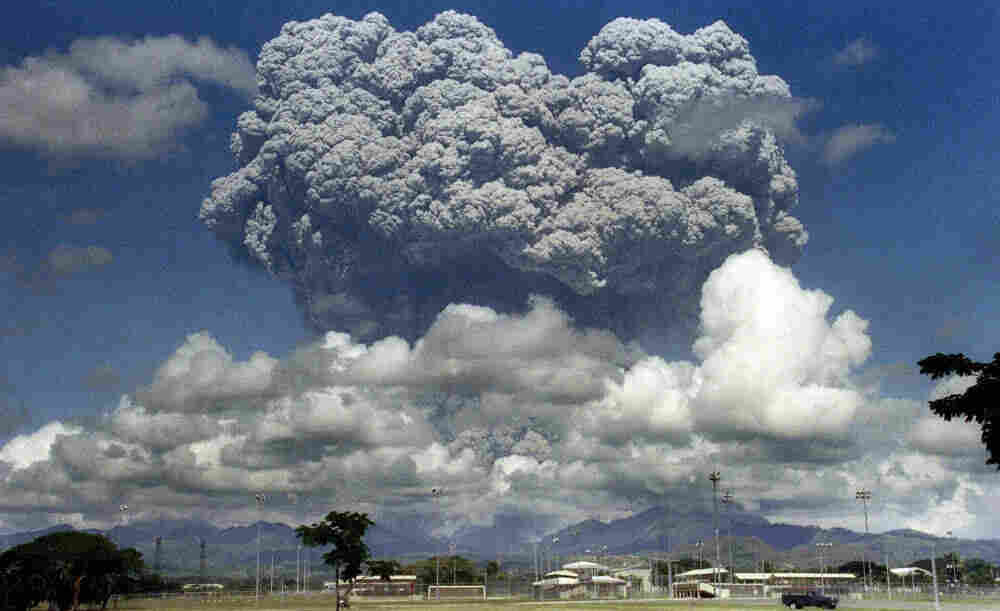 The eruption of Mt. Pinatubo in the Philippines in 1991 spewed almost 20 million tons of sulfur dioxide into the atmosphere, causing worldwide temperatures to drop half a degree on average. Now, scientists are considering mimicking the effect, but there's debate over whether it should be done and who should regulate it. Arlan Naeg/AFP/Getty Images hide caption

At a recent meeting in Japan of the U.N. Convention on Biological Diversity, diplomats tried to set some rules for future geoengineers. They issued what some are calling a moratorium on all geoengineering activities until the science is clear and there are global regulations in place.

If you want to see what geoengineering might look like, go back to 1991, to the eruption of Mt. Pinatubo, in the Philippines.

The volcano spewed almost 20 million tons of sulfur dioxide into the stratosphere. Those particles can reflect sunlight back into space, and for a while, that's exactly what happened. Temperatures around the world dropped by an average of half a degree.

It turns out you don't need a volcano to get the same effect. Scientists could use airplanes to inject sulfur dioxide directly into the stratosphere and bring down global temperatures. What's more, says David Keith, who directs the University of Calgary's Energy and Environmental Systems Group, it would be pretty easy to do.

"It takes so little material to alter the whole planet's climate," he says. "The costs of doing it are just absurdly cheap."

The Mt. Pinatubo effect, as it's called, is just one way scientists believe they might use technology to counteract climate change, or at least its effects. Another way would be growing algae in the ocean to suck up carbon dioxide.

But in order to have a real impact on climate change, the project would have to take place on a massive scale. And that could have all sorts of unintended consequences. For example, rainfall patterns could change. That could mean drought and starvation for thousands of people in East Africa, according to Diana Bronson of the ETC Group, which has been skeptical of geoengineering.

Colby College historian of science and technology James Fleming says geoengineering raises an important question of governance. Someone or some country, he says, could one day find itself capable of setting the temperature for the entire planet. So who, or where, would that be?

Can We 'Cool The Planet' Through Geoengineering?

The U.N. Convention on Biological Diversity does not include the U.S. In fact, just hours before the Saturday meeting where the moratorium was raised, U.S. Rep. Bart Gordon — a Democrat from Tennessee — issued a statement encouraging research into geoengineering. But the ETC Group's Bronson says the international moratorium sends a powerful message.

"It would be very foolish of the Obama administration to say, 'we don't care what anyone says about this, we're going to go ahead anyways,'" Bronson says.

Keith, the Calgary scientist, sees no real incentive, at this point, for any individual country to unilaterally geoengineer the climate. But he says that could change once countries become more aware of climate change affecting their national interests. And, he says, "we don't have the international mechanisms to really manage that."

Keith believes geoengineering may turn out to be an important tool as climate change continues. But he says there's no reason to rush into anything.

Like climate change itself, the impacts of geoengineering may be global. Which means it will take global cooperation to get it right.