Accessibility links
First Listen: Stereolab, 'Not Music' Many groups constantly change their identity, but it's reassuring that the pioneering post-rock band's longevity comes from its devotion to meticulous tinkering and refinement. 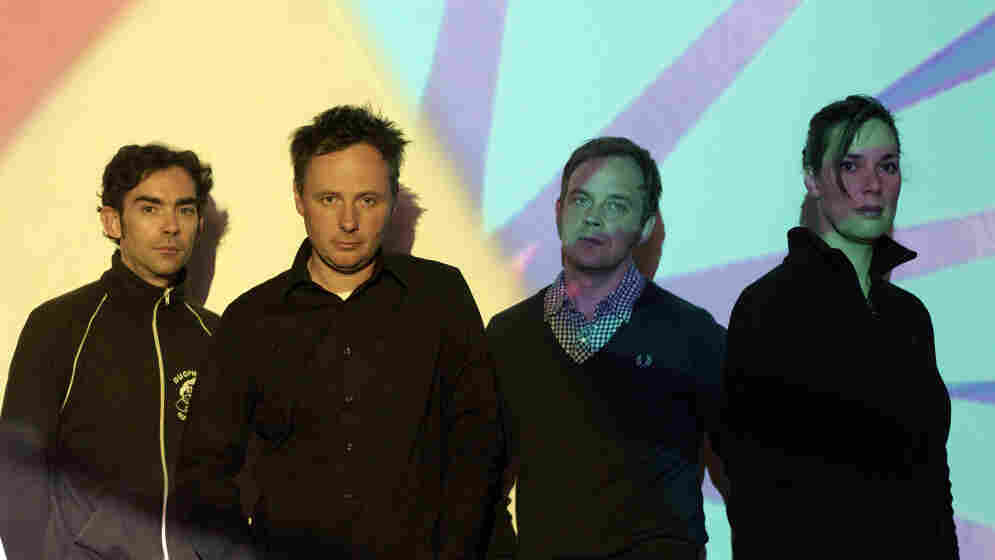 Stereolab recorded the songs on Not Music in the same 2007 session that yielded Chemical Chords. Steve Double hide caption

It's easy to take a band like Stereolab for granted. But it's a credit to the group's consistency that, while it keeps looking to the same places for musical inspiration — '70s Krautrock, '60s French pop and minimalist electronic synth-pop — its members keep fine-tuning their sound and crafting compelling melodies.

After forming in the early '90s, Stereolab quickly emerged as one of the most influential alternative groups of that decade. With early albums like Transient Random-Noise Bursts With Announcements, Emperor Tomato Ketchup and Dots And Loops, Stereolab infused pop and electronica with elements of bossa nova and exotic film-score arrangements, all while Laetitia Sadier sang in French. The band has gone through regular lineup changes — and even faced tragedy when singer Mary Hansen was killed in a 2002 bicycle accident — but still, Stereolab endured.

In some ways, it felt both inevitable and richly deserved when Stereolab announced that it was taking a sabbatical in the spring of 2009. And yet, while the pioneering post-rock band may remain on indefinite hiatus — Sadier even released a solo record earlier this year — its prolificacy has ensured that fans of the experimental pop group will still be able to hear new music for some time.

Not Music, Stereolab's 12th album, was recorded as part of the 2007 sessions that yielded 2008's Chemical Chords. It was created in the same way: Co-founders Tim Gane and Laetitia Sadier constructed a series of roughly 70 loops around tiny percussive patterns, as well as sleek vibraphone and piano figures. They then built up these foundations deliberately, adding layer upon layer of miniature interlocking melodies.

The music on Not Music is not by any means the leftovers; "Everybody's Weird Except Me" and the buoyant "Leleklato Sugar" — which seems to tease out the chords and melody line from The Beatles' "Goodnight" in the bridge — are as organic and accessible as anything Stereolab has recorded in some time. And it's a welcome shift from some of the group's lengthier vamps and more dissonant efforts.

Not Music also revisits songs from Chemical Chords, but in a new way: Some are crafted as direct sequels, such as the punchy piano-pop of "Two Finger Symphony" and the fuzzed-out "Pop Molecules (Molecular Pop 2)," while others are remixes such as "Silver Sands," now refashioned into a 10-minute electronic "Motorik" vamp, complete with 8-bit synth lines. Even "Neon Beanbag," one of the poppier songs from Chemical Chords, is transformed here, thanks to the remixing work of Atlas Sound's Bradford Cox.

Where many bands constantly change their identity to shake up their sound, it's reassuring that Stereolab's longevity comes from its devotion to subtle experimentation, meticulous tinkering and gentle refinement, all while continuing to sound like itself.

Hear Stereolab's Not Music here until its release on Nov. 16. Please leave your thoughts on the album in the comments section below.