Accessibility links
It's Time: The Wristwatch Makes A Comeback A growing popularity in digital gadgets with built-in clocks might have caused a decline in wristwatch sales in the past few years. But market analysts say consumers are giving the centuries-old timepiece another chance. 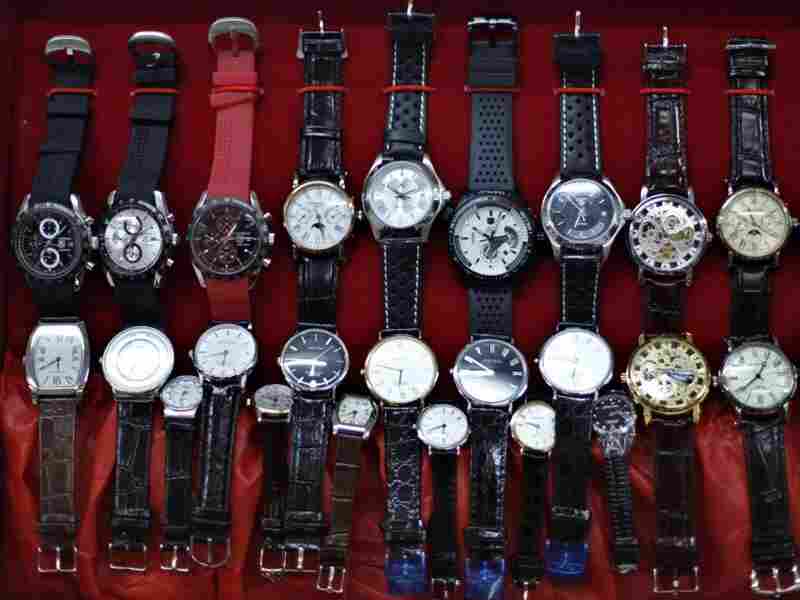 Wristwatches are on display at a local market in Beijing, China. Market analysts say the wristwatch is the "it" accessory of year, and sales are on the rise. Elizabeth Dalziel/AP hide caption

With clocks being built into almost every digital gadget and machine, wristwatch sales have seen a decline in the past few years. But market analysts say the centuries-old time-telling tool is trying to make a comeback.

Wristwatch sales are actually on the rise this year, according to June Rhee, the fashion watch buyer for the Macy's department store chain.

"The overall watch business and the watch industry have been experiencing an unusual growth this year ... it's explosive, and people who've been in the industry for 20, 30 years have never seen numbers like this," Rhee says.

Rhee says the watch has become the "it" accessory of the year.

At a mall in Washington, D.C., 17-year-old Arrya Brown and a crowd of friends are shopping. Brown says teens are only going for one type of watch: "a big, bulky waterproof watch in all colors — clear, pink, blue, yellow, orange, black," complete with a thick band and a large face plate.

It's the style right now, she says. But that alone doesn't make her buy watches.

"It's a waste of money when I have my cell phone already," Brown says.

To compete with other time-telling gadgets that fill pants pockets and purses, fashion and luxury watchmakers are adding new functions like GPS capabilities and moving to solar-powered batteries to give the old wristwatch a modern edge.

It Began With The Wristwatch

Walking into the It's About Time Shop in Alexandria, Va., is a little like stepping into Geppetto's workshop. The hour strikes and the melody of hundreds of grandfather and cuckoo clocks rings out. The sounds that fill the small, crammed room are not common in today's digital age, when alarm clocks are often designed to make you feel like you need to get up and go.

But Steven Halter, the owner of the clock shop, says making your appointments on time was not the idea behind the first mechanical clocks in the 1300s. Back then, Halter says, you would just agree to meet someone by mid-morning.

"You didn't have to be some place at 10 a.m. exactly or you'd be fired," he says. "Time was considered a general idea."

Halter says we began personalizing time in the late 1800s with the wristwatch.

The wristwatch led to a society that works and lives around the strictures of a clock, says Bob Price, a sociology professor at Texas State University where he teaches a course called "Technology and Society." One of the course's topics is on the evolution of the clock.

"I often start [the course] by saying, 'OK, examine your physical person. What machines have you strapped to your body?' The clock is the only device so culturally central that we treat it that way — that we strap it onto our wrist," Price says.

He says the cultural importance of time is why time-telling functions are now embedded into almost every machine.

There are some places, however, where time seemingly ceases to exist. Timothy Dowd, an analyst with the market research company Packaged Facts, says there is an intentional lack of clocks in public spaces like malls, bars and restaurants.

"You don't see what time it is ever, unless you carry it with you. And that's to keep you spending money," Dowd says.

Dowd calls it the "casino factor" — designed to help customers get lost in time.

According to Dowd, the best technology working against this marketing device is having your own personal timepiece, whether it's on your phone or on your wrist. But he says the novelty of using tech accessories as clocks is starting to wear off, and he says "time that's just a flick of the wrist away" is catching on as the more convenient device.