Accessibility links
Economic Woes Spur Interest In Refinancing Plan Two Columbia University economists have proposed a plan to help Americans save thousands of dollars on their mortgages every year. It would help all types of homeowners refinance, including those who are in good financial shape, and those who are on the cusp of foreclosure. 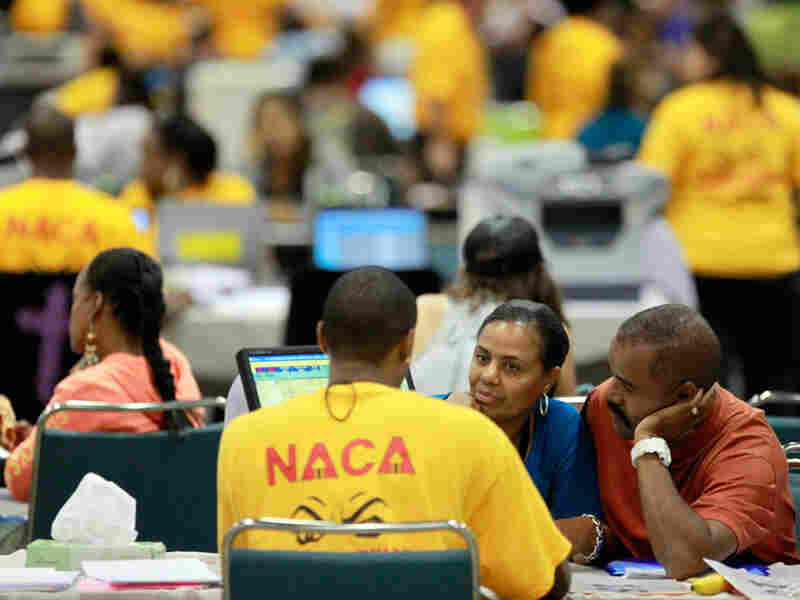 Charles Gibson and his wife, Michelle, are helped by a Neighborhood Assistance Corporation of America staff member in getting a reduction on their loan for their Riverside, Calif., home. Some economists are pushing for a plan that would streamline refinancing for all government-backed loans. Damian Dovarganes/AP hide caption 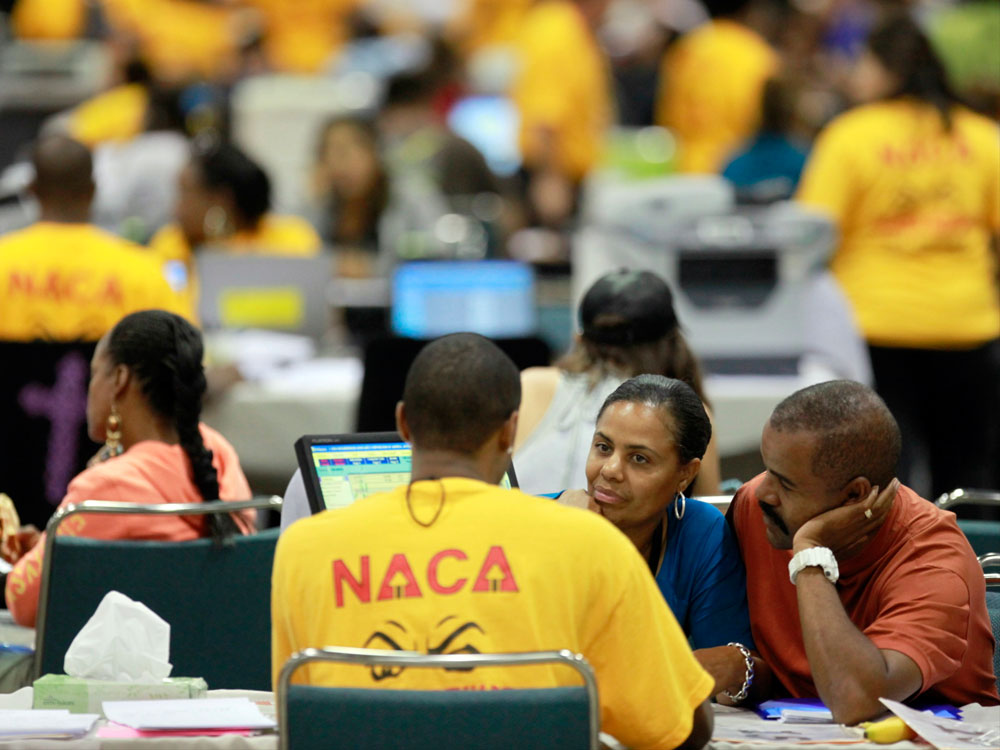 Charles Gibson and his wife, Michelle, are helped by a Neighborhood Assistance Corporation of America staff member in getting a reduction on their loan for their Riverside, Calif., home. Some economists are pushing for a plan that would streamline refinancing for all government-backed loans.

The Federal Reserve is spending hundreds of billions of dollars to spur economic growth and keep interest rates low. But most homeowners who really need a lower interest rate can't qualify. And foreclosures remain at record levels.

With Republicans winning control of the House, many people are asking what kind of meaningful legislation both parties could actually agree on.

Some prominent economists are suggesting a plan that they say won't cost taxpayers any money; it would save millions of Americans thousands of dollars on their mortgages every year. And it would help all kinds of people -- some who are in good financial shape, and others who are just barely managing to hang onto their houses.

Unemployed And Desperate To Refinance

Bill Trabucco was among 5,000 homeowners who showed up at a recent foreclosure prevention event in Boston. Trabucco, 42, who lost his job in April as an emergency medical technician, says it's the first time in his life he's been on unemployment. "I'm here like many others seeking relief to hang onto my family home that I've been in for 30 years now," he says.

Trabucco says he's desperate to refinance at today's low rates -- around 4 percent for a 30-year fixed-rate loan. That would save him $350 a month on his mortgage.  But he can't qualify because he's out of work.

Millions of other Americans don't qualify because they don't have a near-perfect credit score, or their homes have declined in value.

"I just really don't understand the banks," Trabucco says. "I'm not looking for a handout."

He says just being able to refinance at the low rates available to others would enable him to stay in his home.

Economists R. Glenn Hubbard and Christopher Mayer say millions of Americans are being blocked from taking advantage of today's historic low interest rates. Most people have government­­-backed loans, so it's in the taxpayers' interest to let homeowners refinance to get cheaper payments, avoid foreclosures and stimulate consumer spending.  Here, a look at how the plan would work:

— The government would direct Fannie Mae, Freddie Mac and the Federal Housing Administration to guarantee refinanced loans for anyone who already has a government-backed loan.

— The three agencies would direct lenders to send a short application to all eligible borrowers promising to allow them to refinance with minimal paperwork.

— Lenders would receive a fixed and reduced fee for each mortgage they refinance. Savings would be negotiated on title-related costs, and those costs would then be rolled into the new loan. (The increased taxpayer exposure from the slightly larger new loan amount would be offset by a lower default rate and related savings to taxpayers.)

— Millions of homeowners, most of them middle class, would save an average $2,000 a year and some would save much more. In total, this would represent $50 billion in annual savings for U.S. homeowners.

Fannie And Freddie As Gatekeepers

Trabucco found out at the event that his loan is owned by the government-backed mortgage company Fannie Mae, which has taken around $100 billion in taxpayer bailout money.

"Are you kidding me?" Trabucco says. "You got billions of dollars of taxpayer money, and you're going to tell me I don't qualify because I'm on unemployment?"

It might seem obvious that Fannie Mae or the banks have good reason not to lend money to someone who's out of work. But Trabucco isn't borrowing more money. He just wants to refinance.

And more economists are saying he should be able to accomplish this. Fannie Mae and Freddie Mac are in a unique position right now. Because of the uncertainty in the economy, almost all new mortgages that get written or refinanced have to have guarantees from Fannie or Freddie.

So, in that sense, they have become the gatekeepers of who can refinance and who cannot. And they've been charging penalties and fees based on credit scores, home values and employment status -- a practice that might make sense for new loans. But some economists say it's counterproductive for refinancing.

Christopher Mayer and R. Glenn Hubbard, economists at Columbia University, have introduced a plan that calls for Fannie and Freddie to guarantee home loans for more than 30 million people across the country.

Read More About The Home Act

Since the government backs Fannie and Freddie, it has already stepped in to guarantee all of these loans.

"The government is on the hook for about 60 percent of all the mortgages outstanding," Mayer says. He says that's why it makes sense to let Americans like Trabucco refinance.

Now, most can't because their credit score isn't good enough, their house has fallen in value, or they're unemployed. But Mayer says none of that should matter.

If these home loans go bad, he says, U.S. taxpayers take huge losses. But if Fannie and Freddie extend the same guarantee they already have given on those loans -- to cover them once they're refinanced, without any penalties -- that would allow millions of Americans to go to a bank and refinance at today's low rates.

Mayer and Hubbard say if Fannie and Freddie allowed this to happen, U.S. homeowners would save $50 billion a year on their mortgage payments. That's a lasting stimulus that could boost consumer spending and the economy.

It would also mean fewer foreclosures, which would help the housing market.

"The big benefit of this program is that it does not cost taxpayers money," Mayer says.

That's because the rates are available on the open market, and fewer foreclosures will mean fewer losses to Fannie and Freddie and the U.S. taxpayer. Mayer says the plan would likely save taxpayers money.

But some economists think there would be unintended consequences. Critics don't believe it really wouldn't cost taxpayers money, and they note that there would also be some other losers: If U.S. homeowners ultimately save about $50 billion a year, then that money would have to come out of the pockets of investors around the world.

In part two, more on the debate over the proposal and its political prospects.