Accessibility links
Rising Powers Flex Muscles On Global Stage The U.S. and others say they are ready to broaden the leadership of key international institutions, but the emerging powers may not be satisfied with a share of the leadership. They may want to change the institutions themselves and the principles that guide them. 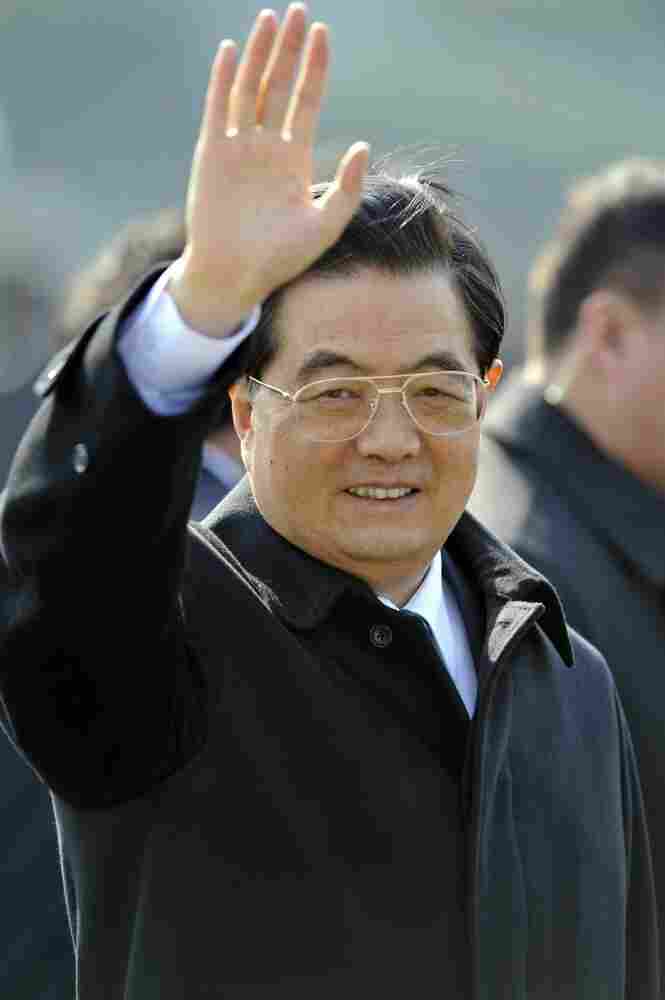 China's President Hu Jintao waves as he disembarks from his aircraft upon arrival at Seoul Air Base for the G20 Summit on Thursday. Emerging countries like China may no longer be satisfied with a share of the leadership of key international institutions. They may want to change the institutions themselves. Romeo Gacad/Getty hide caption

Not long ago, it was the Group of Seven, comprising the big Western industrial countries, that managed the global economy. Now it's the Group of 20, and its summit this week is demonstrating how the global geopolitical landscape has changed.

The heated discussions in the South Korean capital, Seoul, over global trade imbalances and exchange-rate policies make recent G-7 meetings seem like a sideshow. China, India, Brazil and other rising economic powers are demonstrating their clout.

The United States and other governments say they are ready to broaden the leadership of key international institutions, from the International Monetary Fund to the United Nations. But the emerging powers may not be satisfied with a share of the leadership. They may want to change the institutions themselves and the principles that guide them. Western leaders are not sure how the global order will be affected.

Like President Bush before him, President Obama seems eager to welcome the new economic players to the global stage, as he did this week by endorsing India's longstanding bid for a permanent seat on the U.N. Security Council. The declaration before the Indian Parliament, not surprisingly, earned him sustained applause. He waited for it to die down, as if he wanted to be sure his audience heard what he had to say next.

I think we're moving into an era where U.S. leadership in taken much less for granted and the fundamental principles of world order are going to be much more up for grabs.

Western leaders realize that rising countries like India and China deserve bigger roles in global institutions, but they are clearly concerned about how the new powers will exercise their enhanced authority.

"I think we're moving into an era where U.S. leadership in taken much less for granted and the fundamental principles of world order are going to be much more up for grabs," says Stewart Patrick, director of the Program on International Institutions and Global Governance at the Council on Foreign Relations.

U.S. economic leadership is being questioned right now, for example, at the G-20 summit, with China the lead critic. The rising powers, by their own policies, suggest they may not be all that loyal to the old guard's geopolitical ideas.

"We're not facing Mao's China and we're not facing Lenin's Russia," Patrick says. "But we are facing countries that would like to alter the rules of the game, [rules] they think are stacked against them."

In his speech to the Indian Parliament, Obama summarized the ideals of the United Nations as "preserving peace and security, promoting global cooperation, and advancing human rights."

In each case, however, the emerging world powers may try to chart a new course.

The United States and its allies say peace and security are threatened by Iran's nuclear program. But when it came time to vote on new sanctions against Iran this last summer, Brazil and Turkey -- rising powers both -- refused to go along.

For its part, India would presumably gain veto power on the Security Council if the United States got its way. But whether U.S. diplomats could count on India's support in a debate over Iran is not certain.

"What would India do if there were a new resolution, further down the line, for much tougher sanctions on Iran for its nuclear program?" asks Jorge Castañeda, Mexico's Foreign Minister from 2000 to 2003. "Which way would it vote?"

I'm not sure they really take themselves as economic, financial, and political powers of an equal standing or greater standing than places like France and England.

As for the U.N. mission of advancing human rights, India has already made clear its reluctance to put pressure on the military dictatorship in Myanmar (Burma), perhaps because it depends on that country for energy supplies or because it sees Myanmar as countering China's influence in the region. South Africa, another emerging economic power, has likewise refused to challenge the dictator Robert Mugabe in Zimbabwe.

In the past, the United Nations and other international institutions have sometimes endorsed outside military interventions in countries where governments are committing or tolerating atrocities. But the new players, if given leadership authority, may be less inclined to pass judgment on other governments.

"The vast majority of emerging powers have a very strongly held belief in the sanctity of national sovereignty and are skeptical of the notion of armed intervention," says Patrick, author of The Best Laid Plans: the Origins of American Multilateralism and the Dawn of the Cold War.

Finally, in order to advance the United Nations goal of promoting "global cooperation," U.N. powers have to be willing to look beyond their prejudices to consider what's good for the world community.

As Mexico's foreign minister, Castañeda met often with diplomats from many of the "developing" countries now identified as emerging powers. Many of them, Castañeda recalls, saw themselves back then as non-aligned, representing the Third World against the "imperialist" United States and other big powers.

"I'm not sure that they have outgrown that," says Castañeda, now a professor at New York University. In a recent article in Foreign Affairs magazine, titled "Not Ready for Prime Time," Castañeda argued that including emerging powers in the leadership of world institutions could hurt global governance.

"I'm not sure they really take themselves as economic, financial, and political powers of an equal standing or greater standing than places like France and England," he says.

The United States and its allies may hope that the countries now assuming leadership roles in the G-20 or in other international organizations will carry on in the same way as the old guard did. But institutions change as their membership changes, and the new world order is likely to increasingly reflect the priorities of its new leaders.