Accessibility links
Pet Physics: The Uncanny Lapping Of Cats Cats of all sizes have a surprisingly elaborate way of drinking. Fluid mechanics scientists have learned that instead of scooping up water with their tongues, cats delicately flick them on the surface of the water, creating a jet they catch in their mouths. 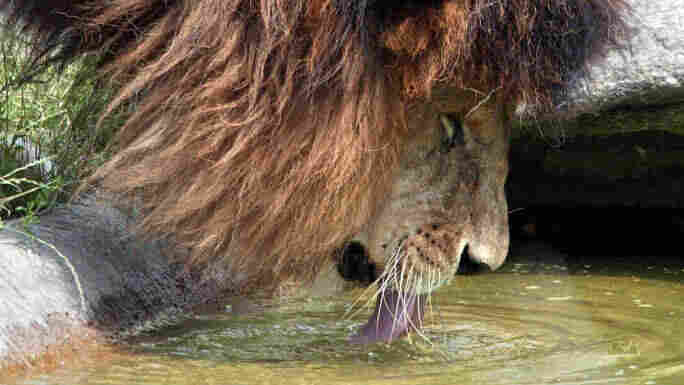 Big Or Small, It's The Same Physics: A lion drinks by touching its tongue to the water surface and then drawing it up rapidly. That forms a small column of water in the air the cat can catch in its mouth. The bigger the cat, the slower the lapping. Timm Schamberger/AFP/Getty Images hide caption

Even if you don't own a cat you've probably seen one lap up a bowl of milk. Exactly how our feline friends go about doing it has been a scientific mystery, until now: The journal Science has published the conclusive study of how cats drink.

It turns out that trying to capture cat-drinking on film is a bit harder than you might expect.

"You don't induce the cat to drink; you just wait until the cat decides to drink," says Roman Stocker, an author of the study and an associate professor at MIT who specializes in fluid mechanics. Stocker and his colleagues spent hours filming -- or trying to film -- cats lapping.

Cats and dogs, in fact, drink quite differently. Dogs use their tongues like a scoop to lift and pull water into their mouths. Cats, on the other hand, rapidly flick the tip of their tongues on the water, drawing up a column of liquid to their mouths. These videos show dogs and cats drinking in slow motion.

"The nice thing about it is that the cat laps with an impressive frequency of four times per second, so if you catch only a few seconds of lapping you have many laps," Stocker explains.

Watching in slow motion reveals that cats of all sizes, from tabbies to tigers, have a very elaborate way of drinking. First, they move the tip of their tongue onto the surface of the water to flick the water up so that a little jet of liquid flies into the air. Then, in a flash, they catch the jet in their mouth.

What's more, when the researchers crunched the numbers, they found the cats had it down.

"They really know how to do it perfectly, almost as if they're doing the equations in their head," says Pedro Reis, a co-author of the study and assistant professor at MIT.

The Value Of Pet Physics?

The whole system is much more elaborate than that of dogs, which simply scoop up the water with their tongues.

"I have no idea why cats don't just do it the ordinary way, but you know that's the weird, interesting thing about biology: What nature does is not necessarily the best way to do things," says David Hu, a researcher at Georgia Tech. "I think that dogs generally have a better way to do it."

Full disclosure: Hu owns a poodle and also recently completed an exhaustive study of how dogs shake themselves dry.

All this pet physics might seem a little silly, but it has a point.

Stoker thinks that cat tongues might guide the design of ultraflexible robots. And Hu, like some other researchers, is interested in studying the movements of fluids. But modeling drops on a computer can be hard to do.