Accessibility links
Danger Mouse, Daniele Luppi Discuss New Album, 'Rome' Hear a preview of newmusic and use our online chat room to send in your questions.

The Duo Shares Its New Music And Takes Your Questions 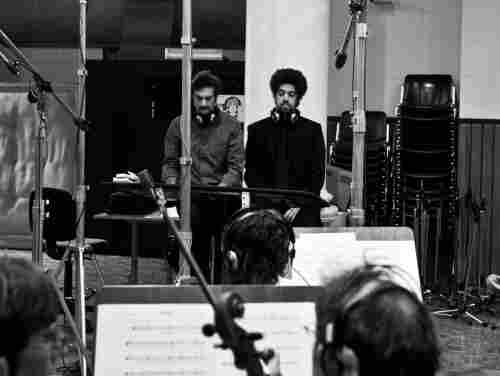 Renowned producer and musician Danger Mouse (a.k.a. Brian Burton) and composer Daniele Luppi have just completed a fairly secretive, five-year project to create songs inspired by their shared love of classic Italian film scores from the 1960s. Imagine the music of Ennio Morricone retooled as moody pop. Their new album, Rome, won't be out until March. But the two will offered a special sneak preview of their work — and answered questions from listeners in our online chat room — live on Friday, Nov. 12. Hear the interview with the link above and read the chat below.

Danger Mouse and Daniele Luppi originally met in Los Angeles in 2004, and have since worked on a number of projects together, including the bands Gnarls Barkley and Broken Bells, as well as the Dark Night Of The Soul album. For Rome, they located and recruited a group of musicians who, more than 40 years ago, worked on the original scores for films such as The Good, The Bad And The Ugly and Once Upon A Time In The West. Most of the musicians are now in their 70s and hadn't worked together in several decades. Rome also includes guest vocals from The White Stripes' Jack White and singer Norah Jones.