Accessibility links
Tilting at Windmills:  Massenet's 'Don Quichotte' Massenet's Don Quichotte is one of several operas based on Miguel Cervantes' 17th-century novel, in which the self-proclaimed knight-errant travels the world righting wrongs. 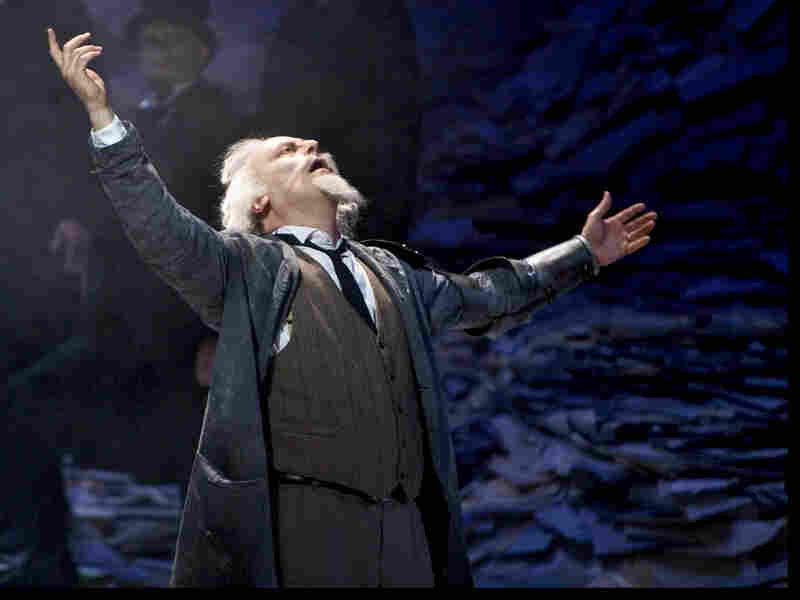 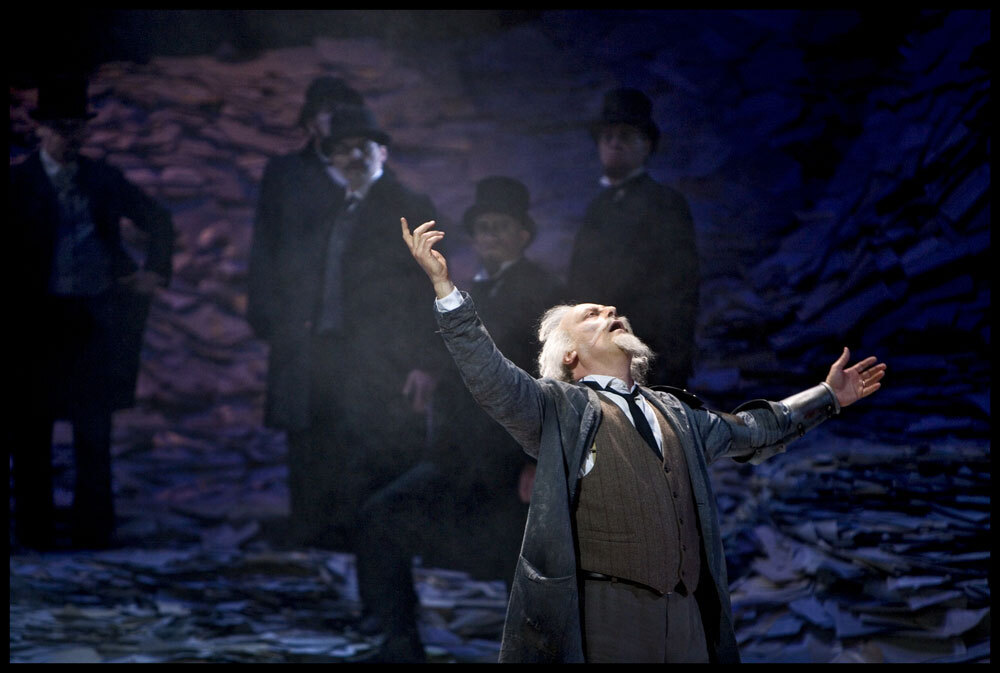 Don Quixote (Jose Van Dam) describes himself as a knight-errant who wanders the world righting wrongs, comforting mourners and aiding the oppressed.

In the opera's final scene, Don Quixote and Sancho Panza (bass Jose Van Dam and baritone Werner Van Mechelen) are together in mountains. Quixote says he's reached the end. With the voice of Dulcinea (mezzo-soprano Silvia Tro Santafé) in his ears, Quixote dies in Sancho's arms.

The Death of Don Quixote

In Act Four, Dulcinea (Silvia Tro Santafé) rejects all four of her suitors -- none of them give her the spark of love she craves. Left alone, she sings "Lorsque le temps d’amour a fui" -- "When the Time of Love Has Flown" -- fearing she's lost her chance at true romance.

When the Time of Love Has Flown

Great literature has always been a rich source of inspiration for composers, though the process has taken longer in some cases than others -- and the results have often been mixed, at best.

There's Shakespeare's Romeo and Juliet, for example. It didn't turn up in the opera house until 200 years or so after it was written, and another century went by before Gounod wrote the first operatic version of the tragedy that's still around today.

On the other side of the coin there's Don Quixote, by Manuel de Cervantes, which started showing up in music almost immediately, at least by historical standards.

Regarded by many as the first true novel ever written, Don Quixote was published in two parts early in the 1600s. The first opera based on the book turned up later that same century, along with some incidental music by Henry Purcell, to accompany a dramatic version of the story. Later there were more operas, several ballets and a widely-played tone poem by Richard Strauss.

Still, when it comes to music, Cervantes does share something with Shakespeare: As with Shakespeare's plays, successful operas based on Don Quixote have been few and far between. The first one, written in 1690, was by a composer named Johann Förtsch -- whose name isn't exactly a household word. Others, also obscure, were written by Giovanni Paisiello and Saverio Mercadante. But there was one composer, Jules Massenet, for whom Don Quixote proved fertile ground.

Massenet's Don Quichotte may stand a rung or two below his better known operas, such as Manon and Werther, yet there is plenty to recommend it. Like Verdi's Shakespeare-based Falstaff, Massenet's opera seems rooted more in its iconic title character than in any single work of literature. And the two operas have more than that in common. Both were written late in their composers' lives and both feature lead characters whose stories find them ridiculed more than often than admired. But Verdi and Massenet, like Shakespeare and Cervantes, tinged the seeming buffoonery of those characters with a touching, world-weary wisdom -- a resigned insight that lets them teach the younger people around them a few sad, but vital lessons.

On World of Opera, host Lisa Simeone presents a new production of Massenet's Don Quichotte from one of Europe's leading theaters, La Monnaie in Brussels. The stars include Belgian bass Jose Van Dam in the title role, with mezzo-soprano Silvia Tro Santafé as Dulcinea and baritone Werner Van Mechelen as Sancho Panza.

The Story of 'Don Quichotte' 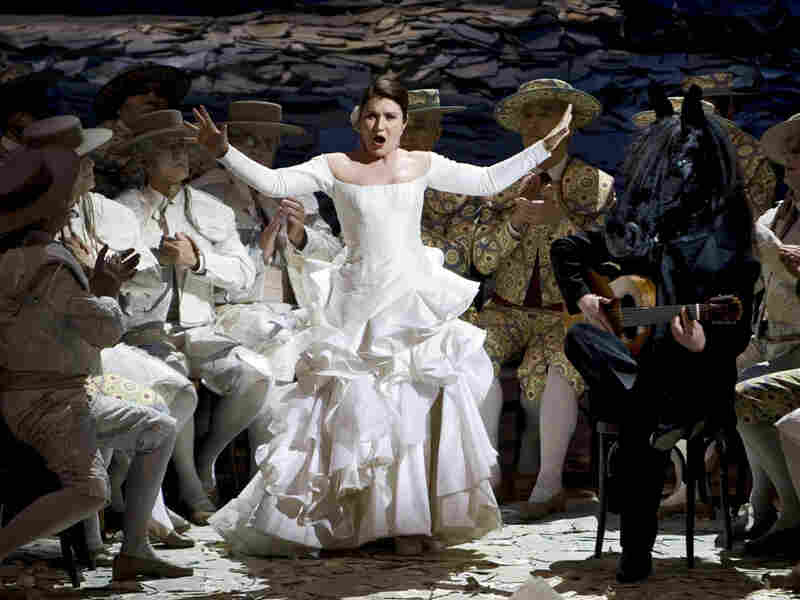 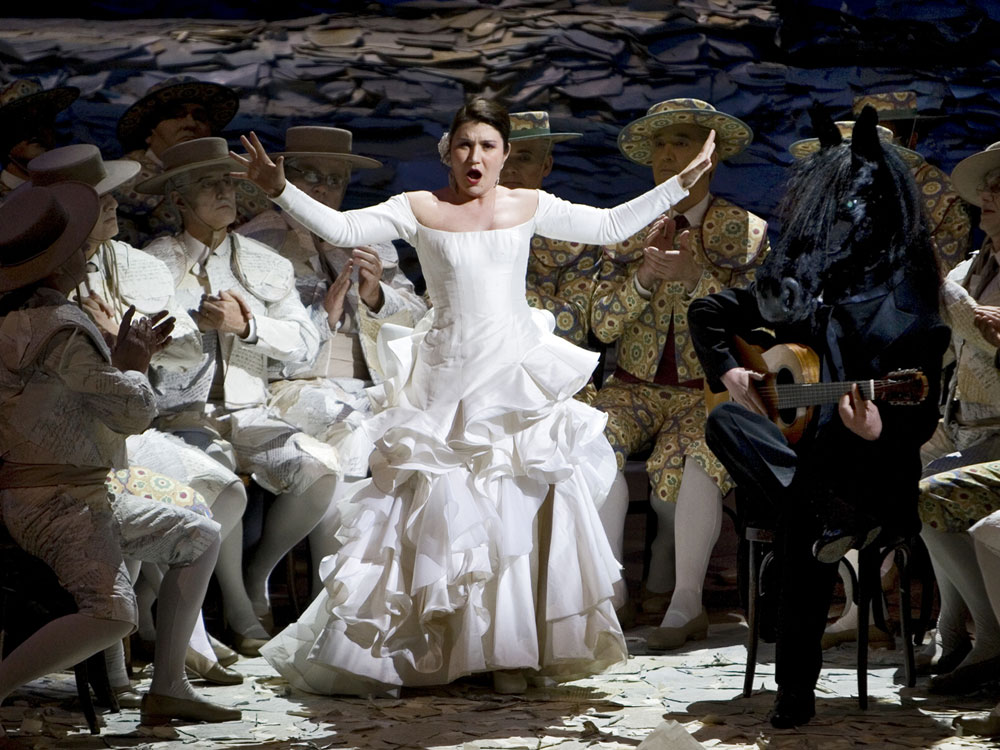 Dulcinea (Silvia Tro Santafé), the object of Don Quixote's love, rejects all of her suitors.

Massenet's opera is in five acts, and begins in a town square in Spain.  Four young men are there, all seeking the romantic attentions of one woman, the locale femme fatale Dulcinea.  But she's not interested in any of them, and sings about the troubles of being 20 years old, beautiful and in search of a spark she doesn't quite understand.

Don Quixote, the famous knight-errant, arrives with his faithful companion Sancho Panza.   Quixote is wearing his familiar battered armor, and the townspeople quickly gather round.  When he tells Sancho Panza to give everyone alms, Sancho wonders aloud where their dinner will come from.  One of Dulcinea's suitors, Juan, ridicules the aging Quixote -- while another, Rodriquez, seems to admire him.

When everyone leaves, Quixote begins to serenade Dulcinea.  Juan hears him and interrupts, but the Don insists on finishing his song, and swords are drawn.  Dulcinea appears on her balcony and intervenes.  She sends Juan away, and teases Quixote for his hot-headedness.

He tells Dulcinea that he loves her -- and would have proved it by killing Juan.  She seems both touched and amused.  Murder would be going a bit too far, she says.  But there is something he can do to prove his feelings.  She says bandits have stolen her favorite pearl necklace -- and she wants Don Quixote to get it back.  He promptly agrees to the challenge.  But for now, as night falls and everyone else goes home, he stands by her door, keeping watch.

In ACT TWO, Quixote and Sancho are in the countryside, riding through a thick, morning mist.  The Don is trying to compose a song about Dulcinea, while Sancho is tired and hungry, and expresses a low opinion of all women.

As the mist begins to clear, windmills appear in the distance.  Quixote, always a bit loopy, mistakes them for menacing giants, blocking the way.  Over Sancho's objections, he spurs his scrawny horse, Rocinante, into a charge.  Sancho follows behind on his donkey, and finds Don Quixote whirling through the air, caught on one of the windmill's sails.

ACT THREE begins at sunset.  As Quixote searches the ground for tracks, Sancho falls asleep.  Before long, Quixote also dozes off.  They're both jolted awake when the thieves they've been hunting arrive on horseback.  Sancho is terrified as the bandits approach.  So the Don sends him into the woods, to hide.

When Quixote confronts the villains, calling them worthless knaves, he's ridiculed -- and badly beaten.  Then, as they're about to deal the fatal blow, Quixote begins a fervent prayer, asking god to receive his faithful soul.  His sincerity moves the bandits' leader -- who wants to know just who Quixote thinks he is.  The Don describes himself as a knight-errant who wanders the world righting wrongs, comforting mourners and aiding the oppressed.

The bandit leader finds himself oddly impressed, and asks Quixote what he wants.  Quixote says he's come to retrieve Dulcinea's stolen necklace.  Unexpectedly, the leader gives it to him, and the villains all ask for Quixote's blessing.

In ACT FOUR Quixote and Sancho, necklace in hand, are ready to make what Quixote hopes will be a triumphant return.    Dulcinea is at home, hosting a party.  Her four persistent suitors are all there -- and she's still resisting them.  She's looking for a love that's "unexpected and sublime."  And none of them, she says, is up to it.  In fact, she tells all four that she simply finds them boring.

Sancho Panza arrives, insisting that the doorman announce Quixote with his full and official title:  "Don Quixote of La Mancha, Baron, and Knight of the Long Countenance."  Quixote promises Sancho a future of untold riches -- maybe even his own island.  It's a world where anything can happen.  After all, Quixote is about to marry Dulcinea.

As the two enter the house, everyone is surprised to find Quixote intact and uninjured.  Dulcinea is even more surprised when he actually produces the necklace she sent him to retrieve.  Glowing with confidence, Don Quixote promptly proposes marriage -- and she just as promptly turns him down.  She's touched by his love, but says she's just not the marrying type.

Dulcinea's suitors, along with the rest of the guests, ridicule Quixote as a silly old fool.  Sancho Panza comes to the Don's defense.  In a moving aria, he praises Quixote's goodness and compassion, and his simple, dreamy spirit.  Then he embraces the Don, and quietly leads him away.

ACT FIVE begins with Sancho and Quixote together in the forest, on a high mountain pass.  Sancho builds a fire, hoping to warm what he calls his master's "great heart."  But Quixote says he's reached the end.  He's dying.  He comforts Sancho, saying he can still have the peaceful island he was promised -- it's a world of dreams, and all he has to do is imagine it.

Don Quixote grows weaker, hearing Dulcinea's voice as he dies, and leaves Sancho in tears as the opera ends.