Accessibility links
Musharraf On India, Terrorism And His Future Three years after being forced out of office, Pervez Musharraf says he intends to return to Pakistan, as an elected leader. He even has a Facebook page. In a visit to Washington, the former military ruler lays out his vision -- and talks about India. 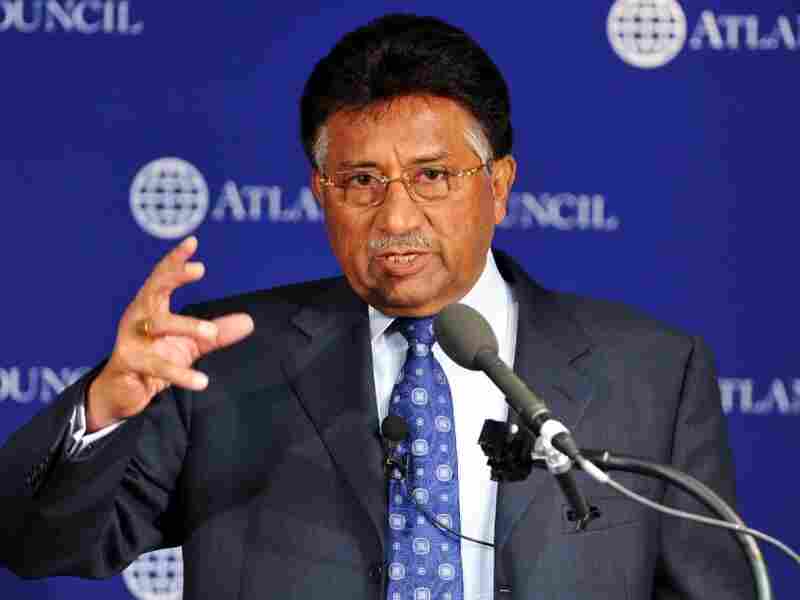 Of an agreement with India on Kashmir, former Pakistani President Pervez Musharraf says, "Unfortunately, that was not to be, but I tried my best." Jewel Samad/AFP hide caption

As the former military ruler of Pakistan, Pervez Musharraf is not exactly known as an apostle of democracy. He seized power in a coup in 1999; three years ago, he was pushed out of office after imposing martial law.

But as he tells Morning Edition co-host Steve Inskeep, Musharraf intends to return to Pakistan -- as an elected leader. He even has a Facebook page.

Musharraf also had plenty to say about his country's relations with India -- and the military tension between the two nations. Here are highlights of those comments, excerpted from a 50-minute conversation:

Chances For Peace In Pakistan

"Peace will not come that easily. One is the resolution of disputes; the other is the forced differential, and the orientation of Indian armed forces entirely against Pakistan.

"If that be the case, even if you have peace and resolve disputes, but if Pakistan sees 80 percent of Indian forces -- army, navy, air force --oriented toward Pakistan, well, that is a serious issue.

His Role In Talks Over Kashmir

"I was certainly trying for it [peace]. And we were reaching success. I have always praised Prime Minister Manmohan Singh [of India] for his sincerity to reach peace. And we almost reached peace on all the three issues...the third one, Kashmir, we had made some certain parameters and we were moving forward towards drafting an agreement. Unfortunately, that was not to be, but I tried my best.

"And I think the way forward is peace -- for the sake of world, which thinks that this is a nuclear flash point; for the sake of SAARC, the only organization of South Asia, South Asian Association for Regional Cooperation, which is impotent because of the conflict because of India and Pakistan; and for the sake of bilateral Pakistan-India advantages -- socio-economic advantages which will flow from peace between the two countries..."

"The problem is every time a civilian government comes, they will conveniently put the blame on the military. This is not at all the case. [The] military is always in favor of resolution of all the disputes, including Kashmir.

"It's not an issue of resolution of dispute. It's an issue of a reality on [the] ground, where Indian forces are poised against Pakistan's borders. As long as that stays. Pakistan's military significance will always stay."

Some people will ask why a former coup leader should be welcomed at all into the democratic process.

PERVEZ MUSHARRAF: Because of our performance. Today on the political horizon in Pakistan, one is the government, or People's Party, which is functioning at this moment. The other...

MUSHARRAF: Each and every socioeconomic factor was on an upsurge. So I left because of certain problems of political nature...

INSKEEP: You were forced out of office.

MUSHARRAF: He deposed himself. He fired me when I was in the air and I...

INSKEEP: You were flying back to Pakistan from outside.

MUSHARRAF: ...gave no orders. He did something very unconstitutional.

INSKEEP: He tried to prevent you from returning to Pakistan.

MUSHARRAF: Yes. He's forcing my plane, which was a commercial plane, to go out of Pakistan's airspace and forcing me to go to an enemy country, which is India. I'm in the - that was the only...

INSKEEP: You had to land there.

MUSHARRAF: ...place I could go to.

INSKEEP: I don't want to reargue that entire case, but could you plausibly have taken that complaint to the courts rather than taking over the country in 1999?

MUSHARRAF: Well, things happened in Pakistan on ground, which was not ordered by me...

INSKEEP: Other people in the military moved.

MUSHARRAF: Yes. And in any case, the country was defaulted state, almost being declared a failed state. So the people of Pakistan were in a terrible state of mind.

INSKEEP: I want to report to you something that I've heard from some Pakistanis this year when I've been visiting your country. Some have suggested that the reason that Pakistan has so much trouble today is that there has been so much instability in government, so many constant changes of government. There's no example in which a government has been able to simply finish its term and peacefully transfer power. You continually have governments forced out of office, frequently by military coups, then the military ruler is forced out of office, and that creates a great deal of instability, and you have an entire history of military interventions and other kinds of interventions that have simply prevented a cycle of governance from going through.

MUSHARRAF: First of all, let me correct you that there has been only once that an assembly and a government has completed its tenure, and that was in my time.

INSKEEP: Although people might not accept those as freely elected assemblies. They were parties that were prevented from (unintelligible)...

INSKEEP: Let me ask about American involvement in Pakistan today, which as you know runs the gamut from civilian assistance under the Kerry-Lugar law all the way to drone strikes in the far northwest of your country. If you were to return to a position of power in Pakistan, what if anything that the U.S. is doing today would you tell them to stop doing?

MUSHARRAF: We cannot violate the sovereignty of Pakistan. It is not acceptable to the people of Pakistan in whatever form. No drone attacks are possible because people don't like it.

INSKEEP: You would forbid those.

INSKEEP: Is Pakistan's sovereignty really being violated or are Pakistani officials quietly approving these drone strikes and then publicly complaining about them?

MUSHARRAF: Well, I don't want to get involved in that.

INSKEEP: What was the case when you were president?

MUSHARRAF: No, I had not allowed it. I didn't allow any drone attacks, and very few did take place (unintelligible) which I always spoke and I always demanded that we should be given the drones.

INSKEEP: One other thing I'd like to ask. Given that some Pakistanis would want to prosecute you if you were to return to Pakistan, how do you plan to return?

INSKEEP: Are you willing to return without any assurance that there will not be a case?

MUSHARRAF: Now, certainly in Pakistan we understand the realities on ground - I do - that there will be some political maneuverings. And for political reasons cases may being initiated against me. If that a fact(ph), we'll fight those in the courts. And those who are saying that cases will be initiated, I would like to initiate cases against them, actually, of corruption, which - like Nawaz Sharif, who is saying all this.

INSKEEP: When do you plan to return?

MUSHARRAF: Before the next election. And I have to create a certain political environment for myself and for my political party before I return.

INSKEEP: Will the military support you if you return?

INSKEEP: Someone listening to you might recall that you came in on the shoulders of the military and might ask why not just have another military coup if you're not happy with how things are going.

INSKEEP: President Musharraf, thanks for coming by.

MUSHARRAF: Thank you very much.