Accessibility links
Deficit Panel Targets Mortgage Interest Deduction Tax breaks don't get much bigger than the mortgage interest deduction. That makes it both an attractive target (because it's big), and one that may just be impossible to go after (because it's popular). 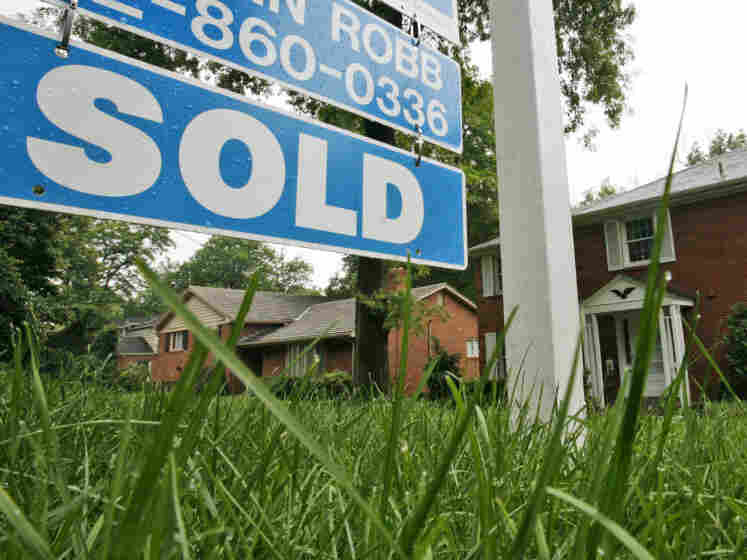 Homeowners can deduct the mortgage interest they pay each year while submitting their taxes, but a new proposal by President Obama's bipartisan deficit commission would eliminate that deduction. Past attempts to cut the incentive have made little headway in Congress. Gene J. Puskar/AP hide caption

Among the proposals put forward by the Democratic and Republican co-chairs of President Obama's deficit commission is one idea that could hit homeowners where it hurts: reducing or eliminating the popular mortgage interest tax deduction.

Tax breaks don't get much bigger than the mortgage interest deduction. Because of it, Americans will save $104 billion on their tax bills in 2011, said Bill Ahern, director of policy and communications at the Tax Foundation, a Washington, D.C.-based research group.

"That is a big tax cut for the nation's mortgage payers," he said.

That makes it both an attractive target (because it's big), and one that may just be impossible to go after (because it's popular). Just ask homeowners.

"That's a good way to decrease your taxes," said Claire Dulong. "I actually refinanced my home to get a tax deduction."

"It's a big chunk," he said. "It's maybe the difference between making itemized deducting worthwhile and not."

Brenda Emanuel Moore said it was a major reason to own a home.

The public policy goal of pushing as many people as possible into mortgages was a boneheaded idea. So the mortgage interest deduction has lost its luster.

"It's one of our biggest tax shelters for most working Americans," she said.

Dulong said it would be a "tragedy" if the mortgage interest deduction were eliminated or reduced.

To be clear, the chairs of the National Commission on Fiscal Responsibility and Reform aren't just targeting the mortgage interest deduction. They are proposing a restructuring of the whole tax system, eliminating all kinds of tax breaks while reducing tax rates overall. The final report is due Dec. 1.

Ahern of the Tax Foundation said the time is right for some big changes to be made. "The public policy goal of pushing as many people as possible into mortgages was a boneheaded idea," he said. "So the mortgage interest deduction has lost its luster."

But that icon isn't going anywhere without a fight.

"It's been in the tax code for almost 100 years and it should stay there," said Lucien Salvant, managing director of the National Association of Realtors. "Now is not the time to tamper with this."

Salvant said that in the past anything that even smacked of tampering with the mortgage interest deduction was dead on arrival in Congress. He said he fully expects it to stay that way. "If it's not dead on arrival, there will be a real flurry of lobbying by the real estate industry," he said.

The deficit commission has 18 members, many of them current members of Congress. Salvant said anything that goes into its final report has to get 14 votes -- a high threshold.

"Everyone should keep their powder dry," he said. "This was just a trial balloon to see how people would react to some ideas that may or may not be in the final report."