Accessibility links
American Excess: Imagine Thanksgiving Without It On Thanksgiving Day, Americans can celebrate priceless national bounty with excess. Or a second helping of reverence and restraint. Over the years, Thanksgiving also became a time for merchants — think Macy's flashy parade — to sell everything. Including more food.

American Excess: Imagine Thanksgiving Without It

American Excess: Imagine Thanksgiving Without It 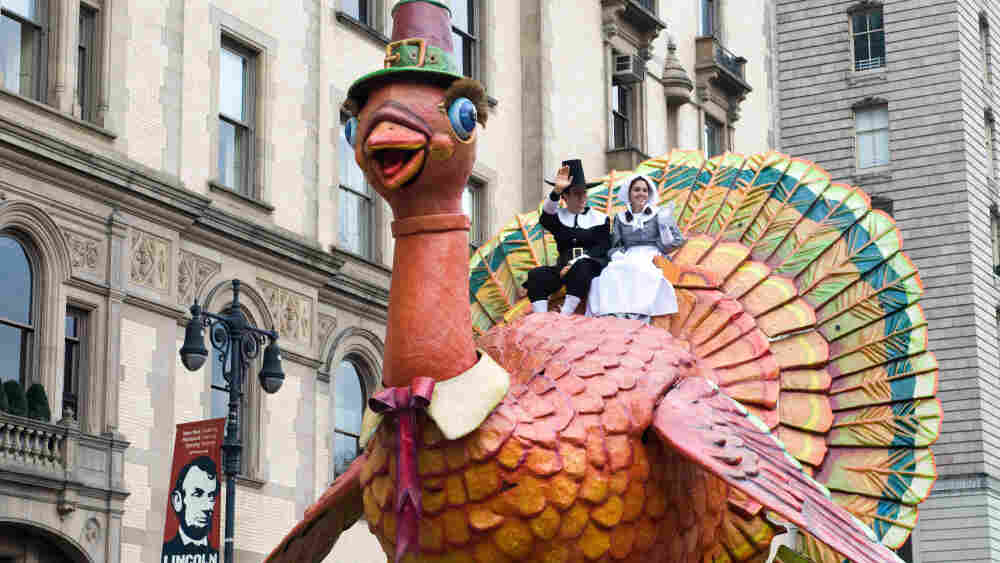 Over the years, Thanksgiving has become a time for merchants -- think Macy's flashy parade -- to sell everything. "This modern version of Thanksgiving would horrify the devout Pilgrims and Puritans who sailed to America in the 17th century," historian Eve Laplante wrote in 2007. Charles Sykes/ AP hide caption

As Thanksgiving 2010 approaches, America's tendency toward excess seems to be getting more and more excessive.

If the contemporary holiday were to be illustrated by a paragraph of adjectives, it would be extremely: luscious, creamy, buttery, oily, salty, sugary, yum-yummy, snacktacular, scrumpdiddlyumptious with over-the-top topping and a million cherries on top. 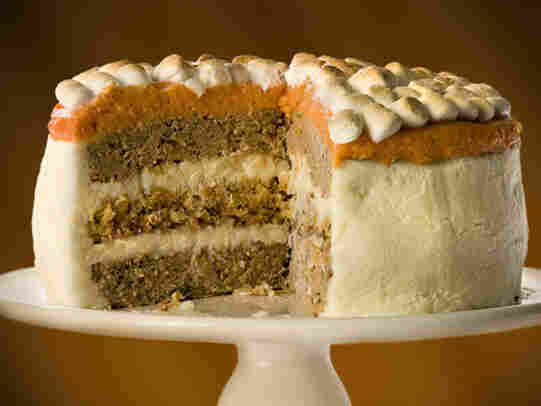 Ummm, Turkey Cake: layers of turkey, sausage, mashed potatoes and cranberry sauce topped with a sweet potato spread and mini-marshmallows. Whip this up for a handful of friends and call it a day. Courtesy CHOW.com hide caption 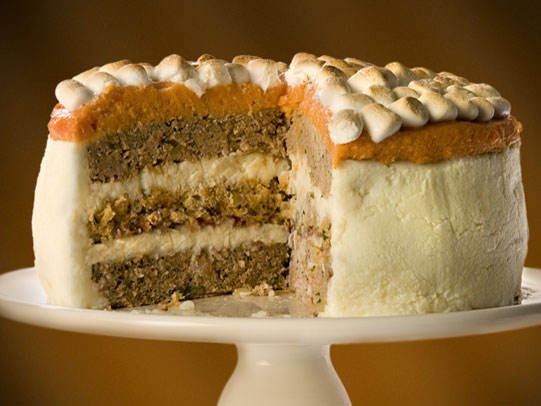 Ummm, Turkey Cake: layers of turkey, sausage, mashed potatoes and cranberry sauce topped with a sweet potato spread and mini-marshmallows. Whip this up for a handful of friends and call it a day.

As every schoolchild knows, Thanksgiving was created by early American agrarians to celebrate a bountiful harvest. According to lore, they shared that bounty with Native Americans. However, as some historians have pointed out, for the Pilgrims, the holiday was a religious respite from farmwork and they used it more as a time for fasting than for feasting. They believed in appreciating their abundance, not squandering it.

"This modern version of Thanksgiving would horrify the devout Pilgrims and Puritans who sailed to America in the 17th century," historian Eve Laplante wrote in The Boston Globe in 2007. "The holiday that gave rise to Thanksgiving -- a 'public day' that they observed regularly -- was almost the precise opposite of today's celebration. It was not secular, but deeply religious. At its center was not an extravagant meal, but a long fast. And its chief concern was not bounty but redemption: to examine the faults in oneself -- and one's community -- with an eye toward spiritual improvement."

Over the years, the religiosity of the holiday has faded away, but the food abideth.

Trey Popp, food writer for Philadelphia magazine, says that perhaps "Thanksgiving's transition from a prayerful holiday into a gluttonously secular one has something to do with the holiday's shift from a New England tradition into a national one, which came about when Lincoln declared it a national holiday during the Civil War."

Southern families initially didn't cotton much to the New England celebration, Popp says. "But Southerners do like a big supper, so maybe changing the focus to food made the holiday easier to swallow."

Over the years, Thanksgiving also became a time for merchants -- think Macy's flashy parade -- to sell everything. Including more food. Which brings us to the excessive American experience that is contemporary Thanksgiving.

Nearly 88 percent of Americans partake of turkey at Thanksgiving, according to Kelley Hower of the National Turkey Federation. In 2009 some 46 million turkeys -- averaging 16 pounds apiece -- were sacrificed to Thanksgiving. That means Americans consumed 736 million pounds of turkey -- along with all the trimmings -- at this time last year.

Let's take a look at a blogger's menu for Nov. 25. Here's the suggested 2010 "Classic Thanksgiving Menu" at AOL's KitchenDaily blog. It is described as "Nothing too fancy, nothing exotic, just really delicious recipes that your family and friends will love."

Sounds like a beast of a feast. But what would you expect from a country where KFC's Double Down -- an artery-clogging, bacon-and-cheese sandwich with a "bun" made of two fried chicken fillets -- is extremely popular? And where state fairs have become incubators for deep fried everything: walleyes, Ho-Hos, butter sticks and beer?

No Thanks To Thanksgiving

Robert Jensen expects more out of America. A journalism professor at the University of Texas, Jensen has written several polemical pieces in the past few years calling for the end of Thanksgiving as we know it.

In the 2005 essay "No Thanks to Thanksgiving," Jensen writes that America could show the world true moral progress by replacing Thanksgiving Day "and its self-indulgent family feasting" with a National Day of Atonement and self-reflective collective fasting.

"I don't think it's strong enough to say we are tilting more and more toward excess," says Jensen today from his home in Austin, Texas. "I think U.S. society long ago went past a point of balance, both in ecological and cultural terms. We have built a world based on mindless consumption, premised on fantasies of endless abundance, all of which have been subsidized by vulnerable people around the world."

Jensen's dream itself may be extreme. But the hobbled economy could help make his dream come partially true. Harsh economic circumstances are forcing some Americans to scale back this year. A recent survey by First Command Financial Services states that "more families have less for Thanksgiving." About 40 percent of those questioned said they will be changing their holiday plans for 2010 because of economic reasons, and 20 percent said they will be cooking Thanksgiving dinner only for relatives.

Joe Cockrell, a media and marketing consultant in New York, told CNN Money this month that in the past he has invited 150 people to a Thanksgiving blowout. But not this year.

Thanksgiving was traditionally "a time to gather with friends before the crazy holiday season hits," Cockrell told CNN. "Last year it was complete with bartenders, catered food and a DJ."

Since last November, Cockrell has run into financial trouble. He had to sell his condominium. He told CNN that this year he is just having a few friends over for Thanksgiving and asking them to bring some of the comestibles. "We'll probably do board games," he said, "just kind of hang out."

When CNN Money asked Susie Coelho, a California lifestyle consultant and entertainment maven, about celebrating Thanksgiving in lean times, she said,  "It's not cool to overdo things when people are suffering. And most people are suffering. ... People are concerned about their homes and their jobs."

For years, some Native Americans have felt that the rest of America overdoes -- and overdoses on -- Thanksgiving. Traditionally, a group congregates near Plymouth Rock in Massachusetts, where early settlers landed in the 17th century, each Thanksgiving to observe a National Day of Mourning.

Jensen feels pretty much the same way. He believes that America is squandering, not squirreling away, its abundant harvest. "I think we need a day of atonement rather than [of] thanksgiving," he says. "Before we can be truly thankful, we need to be honest."

Maybe Jensen is at least headed in the right direction. In this world of economic uncertainty and diminishing resources, perhaps it would be more appropriate to glorify our inestimable national bounty with reverence rather than overindulgence. To cherish what we have rather than chowing down on it. To celebrate prudence rather than pigging out.

Or maybe there is a middle ground. In fact, the creator of the Thanksgiving Turkey Cake believes that she has found it. She believes Americans can have their cake and eat it, too.

Amy Wisniewski, associate food editor at CHOW.com, says her concoction may be the perfect solution "if you think about going to a Thanksgiving affair where half of your friends or family are unemployed and you really can't afford to do a huge spread, including an organic turkey or two with loads of side dishes, desserts and perfectly paired wines. So you whip up a turkey cake for a handful of people, crack a beer and call it a day."

And there you have it: excess and restraint rolled into one. Very layered. Very zeitgeist. Very American.