Accessibility links
Foreign Policy: Where Is Obama's Foreign Policy? Much of the world celebrated when President Obama was elected, hoping for new types of relationships with the U.S. But Ian Bremmer of Foreign Policy argues that two years in, the president has not been able to articulate a doctrine of foreign policy. 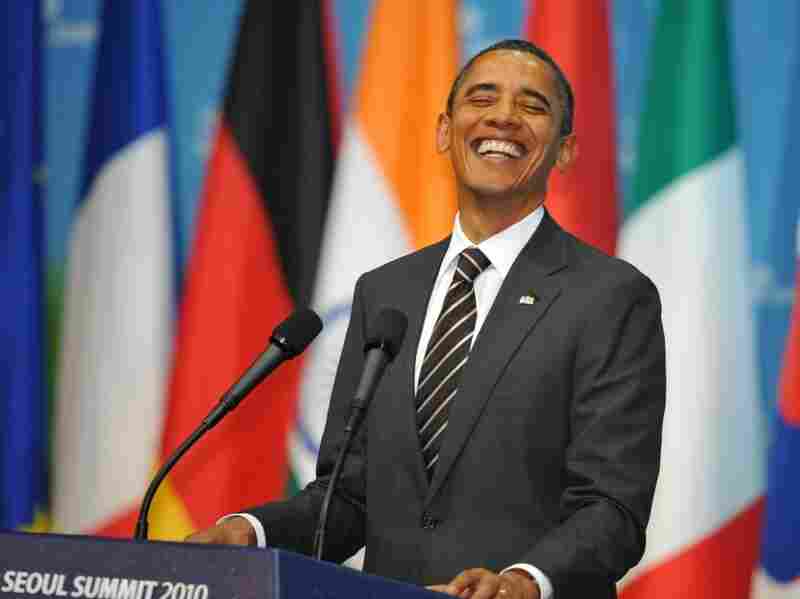 Ian Bremmer is president of Eurasia Group and author of The End of the Free Market: Who Wins the War Between States and Corporations?

Almost as soon as the midterm elections ended, President Barack Obama set off on a 10-day Asia swing. He's found friendly footing abroad so far: a receptive India looking for a general counterweight to China and a rapturous day in Indonesia, where Obama spent several formative years as a child. Next came a G20 summit hosted by South Korea, a strengthening U.S. ally, and then he'll hit Yokohama for an APEC summit and to commemorate the fiftieth anniversary of the U.S.-Japan alliance. But this happy-go-lucky itinerary doesn't even hint at an overarching foreign policy. Which got me thinking, is Obama ever going to come up with one?

Plenty of commercial and defense deals were delivered during the India visit, which shows how that relationship is improving. There were high hopes for a breakthrough in Seoul on the U.S.-Korea trade agreement, though that now seems unlikely (at least for now). The Japan visit should include broad agreement on Tokyo moving ahead (along with the United States) with a trans-Pacific partnership (TPP). But these are all small things.

I was thinking about this while listening to Undersecretary of State Bob Hormats around-the-world speech at the World Affairs Council in Washington last week. I couldn't help but compare it with a similar speech from Secretary of State Hillary Clinton a couple months before. They both talked about the necessity of focusing on issues of bilateral cooperation with China, on Japan as the lynchpin of U.S. policy in the region, on the necessity of promoting free trade, the determination to stay focused on fighting terrorism, and to continue to support democracies around the world. There was talk about not neglecting traditional U.S. allies in Europe. And then, at the end, both emphasized the need to maintain strong commitments with America's key allies in the Western hemisphere, Canada, and Mexico.

I also thought about a speech I had heard from then Secretary of State Colin Powell in 2005. How different were the speeches? How much had the basic precepts of U.S. foreign policy changed over the course of the last two administrations, and during the past five years? To be charitable, I'd say two percent. Maybe. Primarily, the difference is that Asia is now taking up a little more attention, Europe getting slightly shorter shrift. Yet in that same period of time, the world has clearly changed more than two percent.

I'd say the world has hit a decisive inflection point, even more profound than after the collapse of the Soviet Union. The fall of the wall produced a new global security balance, to be sure -- the United States emerged as the sole hegemon. But in terms of the global economic and policy order, the world basically moved from the G7 to the G7 plus one. And to be blunt, the plus one sped up the process of globalization, but it did not reflect a new world order. Once the financial crisis hit, by contrast, the G7 plus one became the G20. And that, however unworkable, is indeed a completely new ordering principle. It means different types of countries and governments vying for influence, power, and preference on key issues of global governance-from trade to currency to the politics of austerity, on climate, and on conventional and cyber security.

Yet there's a stark disconnect between our drastically changed world and U.S. foreign policymaking. Over the past few decades, foreign policy has been the preserve of presidents, successful or not (think about the Carter, Reagan, Clinton, and Bush "doctrines"). But two years and a Nobel Peace Prize into the Obama administration, there's no sign of an Obama doctrine. This U.S. president has handled foreign policy primarily by managing conflict as it arises (stepping in directly when absolutely required), and otherwise making small, incremental policy gains on fronts with momentum. Obama has shaped America's foreign policy apparatus accordingly, with a strong and relatively autonomous Secretary of State in Clinton, a series of senior, competent special envoys in the State Department to handle intractable, longstanding foreign concerns, and loyal but comparatively weak, non-strategic national security advisers (namely, Jim Jones and now Tom Donilon, who primarily serve to coordinate policy communication and untangle disputes, not to leverage the National Security Council as a mechanism for executive policymaking.

The biggest new idea that the Obama White House flirted with, albeit briefly, was the prospect of a G2 -- a notion that the new world order could be jointly managed by the United States and China. But that concept was essentially stillborn as the first efforts to realize it came to an embarrassing naught at the Copenhagen climate summit last December. Since then, U.S-.China relations have steadily deteriorated on most fronts. For the world at large, that means a growing disconnect on global architecture -- think Gondwanaland, inexorably splitting into continents while the old government still embraces a single state. But faster.