Accessibility links
Jury Selection Begins For Civil-Rights Cold Case Former state trooper James Bonard Fowler is charged with murder in connection with the death of Jimmie Lee Jackson, who was shot and killed in Marion, Ala. after a civil rights protest in 1965. Fowler, now 77, claims it was self-defense. Jackson's death galvanized civil rights leaders and led to the historic Selma-to-Montgomery march. 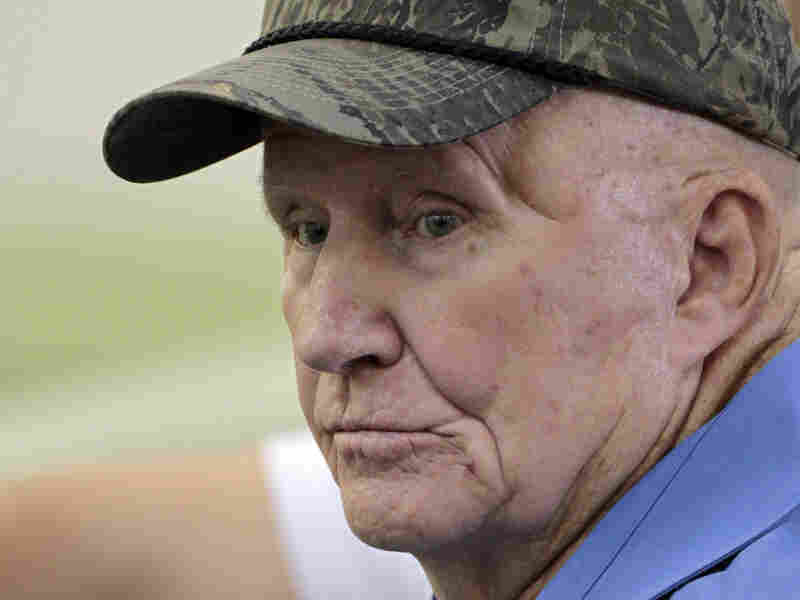 Former Alabama State Trooper James Bonard Fowler sits in the Perry County Courthouse prior to a hearing in Marion, Ala. Fowler is charged with murder in the 1965 shooting of civil rights activist Jimmie Lee Jackson. Dave Martin/AP hide caption

A former state trooper is charged with murder in the shooting death of Jimmie Lee Jackson, a black protester who was killed in 1965. Jackson's death united civil rights leaders across the country and led to the historic Selma-to-Montgomery march.

In the Deep South of 1965, segregation was the law of the land. Anyone who protested against the system was met with violence.

Not far from Selma, Ala., in Marion, a group of African Americans was gathering in a church at night. Alabama state troopers, including James Bonard Fowler, were called in to break up the meeting, and, using billy clubs, they began beating protesters, including 26-year-old Jimmie Lee Jackson.

Jackson fled to Mack's Cafe, and some witnesses said he was being beaten as he tried to protect his mother and grandfather.

But Fowler, now 77, said he acted in self-defense. He shot Jackson in the stomach but claims the protester was trying to take away his gun.

Eight days later, Jackson, a Vietnam War veteran, died at a local hospital, and the Rev. Martin Luther King Jr. traveled to Alabama to speak at the funeral.

"He was murdered by the timidity of a federal government that can spend millions of dollars a day to keep troops in South Vietnam and cannot protect the lives of its own citizens seeking the right to vote," King said.

State and federal law enforcement investigated at the time, but no charges were filed until 2007.

"This is a case that has been a long-standing wound in the national psyche," says Richard Cohen, president of the Southern Poverty Law Center in Montgomery, Ala. "[This is] a case where a young man, a civil rights activist, was killed by an Alabama state trooper under very suspicious circumstances."

Fowler's attorney George Beck declined to comment before the trial, but earlier he told NPR that this is a tough case precisely because it is so old.

"Two troopers who were eyewitnesses no longer exist. They're dead," Beck said. "We don't have Governor Wallace, who made the order. We don't have those people to talk about the atmosphere, to re-create what was going on and to actually be eyewitnesses, so we're hamstrung and prejudiced greatly by that."

This is a case that has been ... a long-standing wound in the national psyche.

One of the reasons this case has moved forward is because Perry County elected its first black district attorney, Michael Jackson. Jackson, who is not related to the victim, says people need to know what really happened, but he declined to comment before the trial.

John Carroll, dean of the law school at Samford University in Birmingham, Ala., says jurors will hear two vastly different versions of the story.

"If you're the defense, you're [going to] argue the town was agitated, everybody was afraid, it was necessary to preserve order, and that's what this trooper was doing," Carroll says. "And if you're the prosecutor, you're going to say these were peaceful marchers, they were gathering peacefully and that this was cold-blooded murder."

More than 20 civil-rights-era cases have come to trial since 1994, including the successful prosecution of James Ford Seale in Mississippi for the murder of two black teens, and the convictions of Thomas Blanton and Bobby Cherry for the bombing of the 16th Street Baptist Church in Birmingham.

Doug Jones, the former U.S. attorney in Alabama who prosecuted the church bombing cases, says Jackson's death stands out among other civil-rights-era cases.

More On The Legacy Of Jackson's Death

How Far Have We Come Since 'Bloody Sunday'?

"This is not just a random Klansman who bombed the 16th Street Baptist Church," Jones says. "Here you got a state trooper, law enforcement officer, called out to keep order. That gives a dynamic to this case that's not present in the normal civil rights cold cases."