Accessibility links
Low-Skilled Workers Struggle For Jobs In Las Vegas At 15 percent, the city's unemployment rate is one of the nation's highest. And the job market there has changed. Now employers are looking for computer skills -- something many workers lack. So laid-off residents like Lorraine Valdez are learning to adapt. 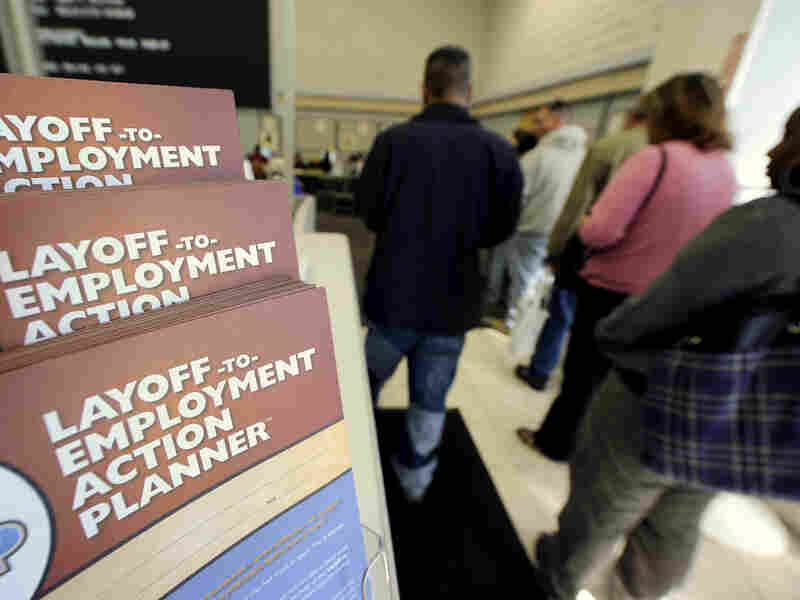 Job-seekers wait in line at a government-run employment center in Las Vegas, where jobless numbers have been in the double digits for months. Robyn Beck/AFP/Getty Images hide caption

Across the United States, we're hearing about green shoots of economic recovery, but Las Vegas is still quite literally a desert. At 15 percent, the city's unemployment rate is one of the nation's highest.

A week ago, Lorraine Valdez lost her job at a printing company. For her, it was the latest in a series of employment woes that have hit very close to home.

Reeling off a list, Valdez says, "My sister just got laid off. My daughter. My son. My boyfriend. Myself. There's like 10 people, just immediate family, that are looking for work."

Valdez is eligible for unemployment, but what she really wants is a job.

On Tuesday, Valdez, her boyfriend, and her daughter waited in the lobby of Nevada Job Connect, a state-run program that pairs job-seekers with potential employers.

As counselors enter the waiting area to call in new clients, rows of job-seekers lift their attention from paperwork, their faces a mixture of expectation and exhaustion. Valdez's boyfriend, Michael, fidgets with several rolled-up forms.

"I took auto tech in school and I found out I was better with my hands," he says, "so hopefully I can try and find a job doing oil changes or cars or machinery."

Valdez's 24 year-old daughter, Alysha, sips an iced coffee. She says she's "preferably looking for a bartending job because of the tips and stuff. But I'll just take whatever."

The three live together with Alysha's younger daughter in a small apartment. Valdez says they've scraped together enough money for this month's rent and half of next month's.

"I'm good till December," Valdez says, "but after that, we might have to move in with my other daughter."

Finally, Valdez's number gets called. In the office of employment counselor Krista Marshall, they sort through the pros and cons of Valdez's resume: She has a 10th-grade education, but she's willing to pursue her GED. She has limited computer skills, but some valuable work experience.

"Marketing and merchandising, that might be a good fit for you as well," Marshall says.

Valdez has a clear, unvarnished view of her own history, and where it's taken her.

"I had babies really early in life. I had my first baby at 16," she says. "I started working immediately. I've been working since I was 14 and a half."

But work has changed for Valdez over the years. "These days, it's not really labor and hands-on kind of stuff," she says. "It's more technical and using your brain. I don't have a lot of education in that, so I need to go get that."

A Crisis For Workers

"The city is seeing the end-result of public and private policies that did not focus on developing the workforce, developing our human capital," he says.

During the growth boom of the past few decades, low-skilled workers flocked to Las Vegas by the hundreds of thousands for jobs in construction, the service sector and retail. It was a rapid but quite shallow kind of economic growth -- one that's evaporated quickly in the recession.

"They have to either retrain themselves or leave town," he says. "Cause if they're sitting around waiting for those large numbers of low-skill, low-wage jobs to come back to the resort industry or the construction industry, that's not going to happen."

But that's the pessimism of an economist. In the face of gloomy statistics, Valdez knows she has to press on.

"I can't just lay down," she says. "I gotta keep going. I gotta. If I do the right thing, something will happen. Some door some way will open up and give me a chance."

And in the short run, doors seem to be opening for Valdez. A few days later, she has an interview with a cab company and a lead on a seasonal gig in a toy store -- something that might keep her going at least through the Christmas season.