Accessibility links
With Lava, Volcano Spews Chemicals To Cool Earth The eruption of Mount Merapi in Indonesia has residents fleeing as ash, dust and volcanic mud pour out of the mountain. But the mountain is also spewing sulfur dioxide, a chemical that may help lower the Earth's temperature and counter global warming. 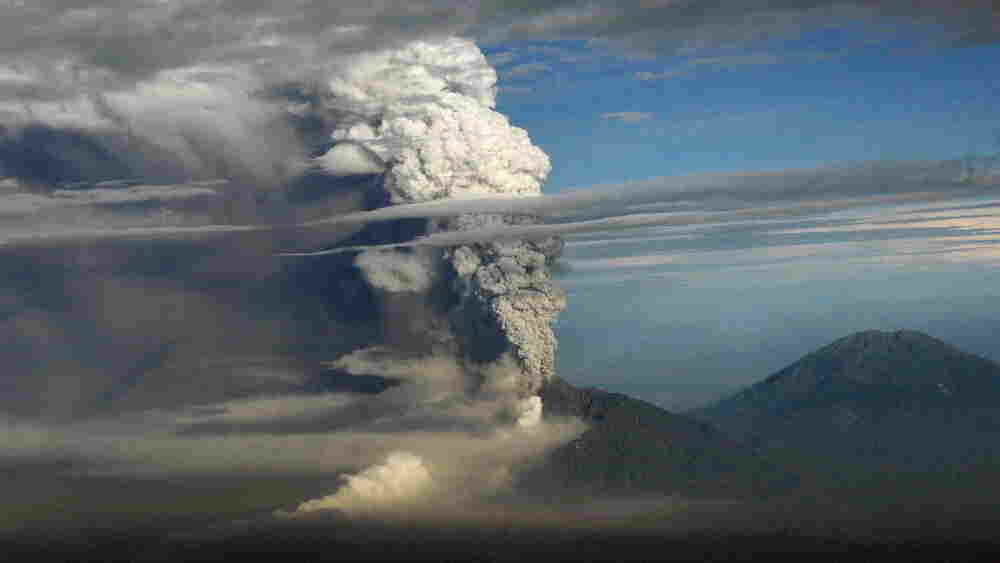 The eruption of Mount Merapi in Indonesia has residents fleeing as ash, dust and volcanic mud pour out of the mountain. The volcano has showed signs of slowing, but destruction to the communities around it since its first eruption in late October is extensive. (The Big Picture photo blog has some incredible images of the damage.)

In addition to the visible releases, volcanoes like Mount Merapi also give off sulfur dioxide, a gas that can have a variety of effects on people and the environment. On the ground, it's a nuisance, triggering asthma and irritating skin. But when it drifts to the upper levels of the atmosphere, it may actually do some good: In a reaction with water vapor and other chemicals, particles from that can actually affect the Earth's climate for many years.

If a volcano near the equator injects a sufficient quantity of sulfur dioxide into the stratosphere, the resulting chemical reactions can create reflective aerosols that linger for months or even years, cooling climate by reflecting sunlight. At just 7.5 degrees south of the equator, Mount Merapi is positioned to have such an impact.

Climate scientists have watched this happen with volcanoes erupting around the world. Check out the chart below, which shows particles in the atmosphere and temperature. Note that large volcanoes, like Pinatubo and Krakatoa, were followed by a fractional -- but significant -- drop in temperature.

The Mount Pintaubo eruption in 1991 released more than 20 million tons of sulfur dioxide into the atmosphere, causing a drop in temperature by half a degree Celsius for about two years. Mount Merapi's eruption, by comparison, has released just 1 percent of that amount. Those particles haven't reached the upper levels of the atmosphere and are unlikely to hang around for a long time or affect the global climate.

Still, it's enough for NASA to take notice. Its Ozone Monitoring Instrument on the Aura spacecraft can pick up and measure sulfur dioxide, which you can see in the plot below. The darker the color, the more concentrated the sulfur dioxide. 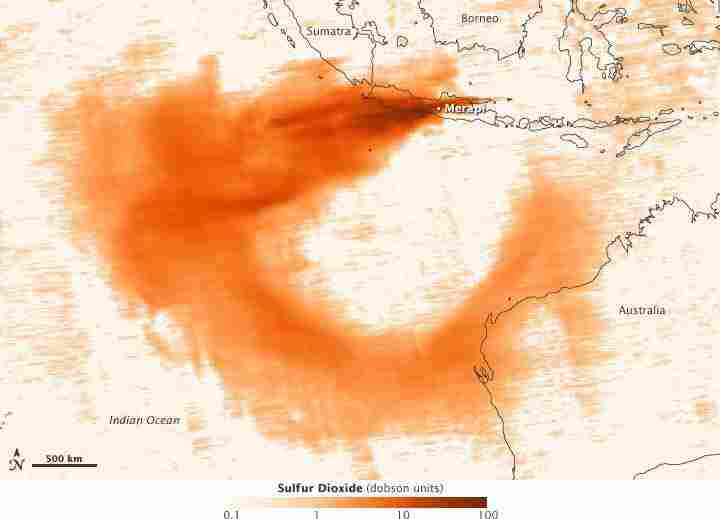 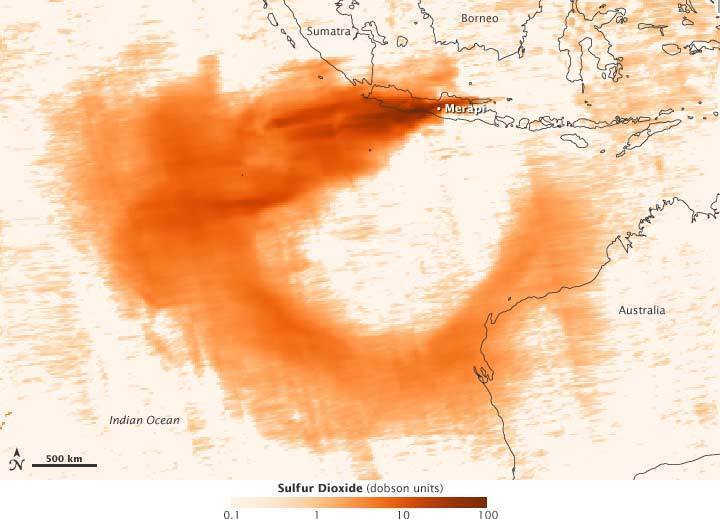 Sulfur dioxide in the atmosphere from volcanic eruptions has also caught the eye of climate scientists who are trying to devise ways to artificially seed the atmosphere with the chemical to combat global warming.

The strategy -- one form of geoengineering -- isn't without its detractors, though. Many worry about unintended consequences such as variations in rainfall patterns that would affect agricultural production.

Kevin Trenberth, a senior scientist at the National Center for Atmospheric Research, says getting the particles to spread out over a targeted area won't be easy either. Aerosols disperse well in the atmosphere along the latitude lines as the winds blow west to east. But moving them north and south takes more time.

Other issues, Trenberth says, are the cost and the location: Should sulfur dioxide seeding be global, or more localized to target specific parts of the planet? Ultimately, policymakers will have to wrestle, as NPR recently reported, with the question of who should ultimately control the Earth's thermostat.