Accessibility links
Tea Party Lawmakers Welcome Themselves To D.C. The newly elected politicians are coming to Washington, D.C., to get acquainted with the institution they will be joining -- an institution they criticized during the campaign. The Tea Party is even holding its own sessions this weekend -- before the official House orientation. 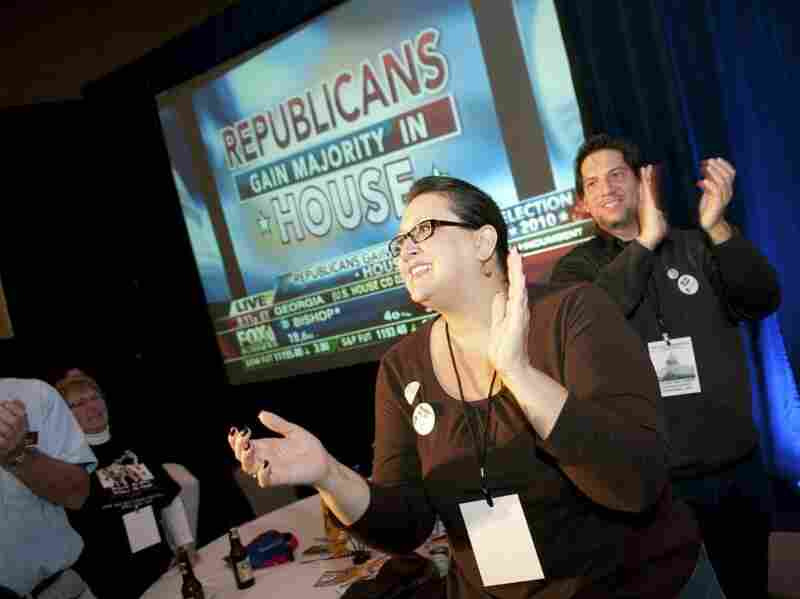 Attendees at a Tea Party event at a Washington, D.C., hotel cheer Nov. 2 as the Republican Party gains the majority in the House of Representatives. The Tea Party movement hosts orientation sessions for freshman lawmakers this weekend. Ron Lamkey/Getty Images hide caption

New members of the U.S. House of Representatives are descending on Washington, D.C., this weekend for their official orientation, but before that, the Tea Party movement is holding orientation sessions of its own.

The congressional Tea Party Caucus, which was formed over the summer, is about to get much bigger. At least 40 of the new Republicans coming into office got help from the Tea Party movement.

They come to Washington this weekend to get acquainted with the institution they will be joining; one they criticized during the campaign. In interviews with local and national media in recent days, they have stressed they are not looking to blend in.

"You know, when the Republicans had control, they did some things that people are not happy with, and then the Democrats took control, and they did some things even worse that people are not happy with," Jim Renacci of Ohio's 16th Congressional District told NPR's Talk of the Nation. "I think we need to start looking at our future, as all Americans, and start making things right and the future right."

That message was echoed by Kristi Noem, who has already been identified as a rising star within the ranks of the newly elected GOP.

"Here in South Dakota, I had a lot of Tea Party support," she told CNN. "I think the message that I carried of smaller limited government, less spending, really resonated with them, and it was something we could agree on.

"So, you know, I certainly think that that is something that's going to be a factor."

No one knows how much of a factor it will be or what kind of staying power the movement will have.

Mark Meckler, co-founder of the Tea Party Patriots, said the group wants to provide support for the new members through the orientation sessions this weekend. But he had words of caution as well.

"We're here to provide the political capital and support them if they stand for the things they stood for during the election," he said. "The second message is this: If they don't, we can be back in two years and find a new crop that will."

Meckler acknowledged the desire to catch the incoming class in advance of the official House welcome meetings that run all next week.

"In its way, it's an inoculation," he said. "The goal is to make sure the freshmen do two things: One is to understand what they are about to face -- that they are going to be told to go along to get along."

And the other goal: "To give them the tools to fight back," he said. "To teach them what they have in terms of leverage and power once they get into Congress."

Much has been made about the role the Tea Party played in the midterms, but Duke University political scientist David Rohde cautions that there have been big swings in Congress in the past and new movements pledging to do things differently.

"To be sure about how different these people are, we're going to have to observe them in action," he said. "Not just listening to some of the rhetoric. We're going to learn things as things go on.

"I've heard a whole lot of grandiose claims about this, and I think it's really hard to know for sure."

Rohde remembers big classes of freshmen in the past -- post-Watergate Democrats in 1974, Contract With America Republicans 20 years later -- all convinced they would change everything. Yet every so many years, there comes a new wave, just as sure that everything still needs to change.