Accessibility links
Two Views Of Likely Catholic Leader Bishop Gerald Kicanas of Tucson, Ariz., is thought to be the presumptive next president of the U.S. Conference of Catholic Bishops. But some conservative Catholics are wary of his progressive views. 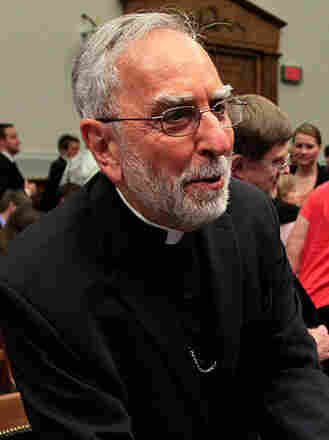 The U.S. Conference of Catholic Bishops gathers in Baltimore this week to decide who will be its next president, and if past is prologue, we know who will win: Bishop Gerald Kicanas of Tucson, Ariz. But this year, what is usually a rote decision is garnering a flurry of debate.

Kicanus is seen as an easygoing diplomat who prefers digging into policy papers over hogging the spotlight. And he's popular.

"In his diocese, he's seen as one of the most effective bishops in the country," says Rocco Palmo, a close observer of the Catholic Church, who writes the blog "Whispers in the Loggia."

Palmo says Kicanas earned that reputation after 2003, when he became bishop of Tucson, where he inherited a diocese rife with sex abuse allegations and on the brink of bankruptcy.

"While some dioceses have struggled — and it's been an acrimonious time — the Tucson bankruptcy under Kicanas' leadership has been seen as a national model," Palmo says.

The bankruptcy judge publicly praised Kicanas for treating the victims well spiritually and financially, Palmo says, and in a vote of confidence, donations to the bishop's appeal outstripped their expectations a year after the bankruptcy.

That's one view of Kicanas. Another is held by Terry McKiernan, who runs the watchdog group BishopsAccountability.org and says practically every bishop in the pipeline for the presidency has been tainted by the sex abuse scandal.

"But there are specific reasons Kicanas worries us," McKiernan says.

Those reasons involve Daniel McCormack, a priest who was accused of molesting nearly two dozen boys. McCormack is now in jail. Kicanas was rector of the seminary in Illinois that McCormack attended, and according to news reports, Kicanas admitted knowing about three instances of sexual misconduct — two of them with adults, and one with a minor.

"Kicanas nevertheless approved McCormack for ordination, disastrously as it turned out, on the grounds that it would be unfair to do otherwise," McKiernan says. "The explanation [was] that his behavior was really part of the 'developmental process,' and that [McCormack] had learned from the experience."

Bishop Kicanas flatly denies he knew about the minor. In a statement last week, he said, "At no time while McCormack was a seminarian ... did I receive any allegation of pedophilia or child molestation against him." Kicanas said his newspaper quotes were taken out of context.

Palmo says the details about the case may be unclear, but the way the allegations are being used is not. Kicanas is known as a moderate, and this story is being circulated by conservative Catholic blogs and newspapers.

"The pickup has come from the Catholic right, who clearly would have qualms about a progressive president," Palmo says.

Those people did not make a fuss when Cardinal Francis George, a conservative, was elected president of the conference three years ago. Palmo notes that George was far more involved in the McCormack scandal than Kicanas is alleged to be.

McKiernan says that brings up another problem. It's practically automatic that if a bishop is elected vice president of the conference, he'll be elected president three years later — even if new allegations come to light.

"I think if the process became more genuinely an election, and less of a coronation, we would be getting better people in these positions," McKiernan says.

But most observers doubt that will happen this year.

"It would be extraordinary. It would be shocking," says Father Thomas Reese, a Jesuit priest and senior fellow at Georgetown University's Woodstock Theological Center. "Every vice president except one has been elected president — and that vice president was simply too old [by the time the election came around]."

And Reese says the bishops are not likely to change course because of a few news reports.