Accessibility links
Economic Nationalism Returns To G-20 Summit The disagreements at the Group of 20 summit was a disappointment to leaders. But there is a more positive view: Decisions about the global economy are now being made by a broader group of governments, which now have more of a stake in those decisions. 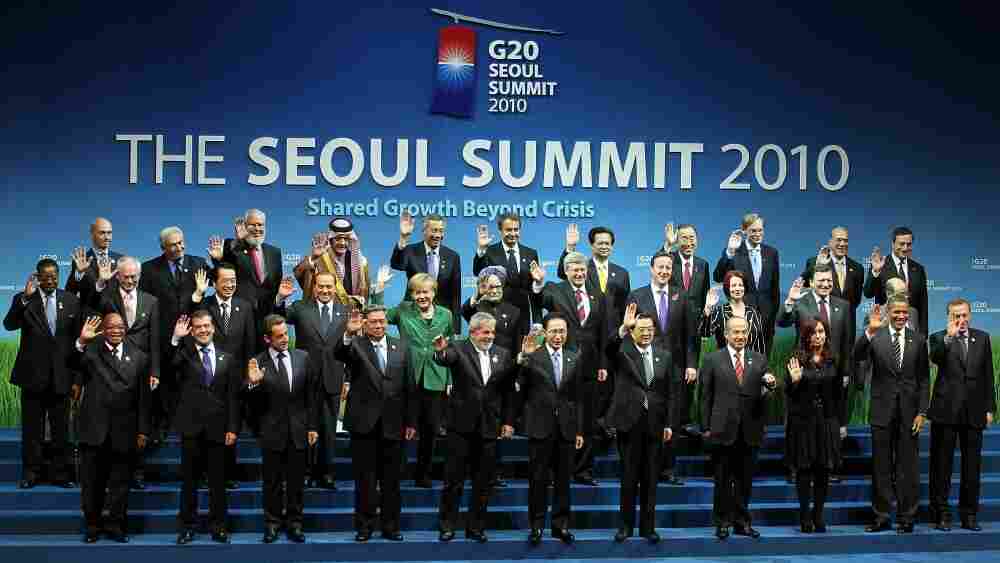 Leaders from the Group of 20 nations smile for the cameras on Friday, but this year's summit wasn't as productive as the ones that preceded it. Getty Images hide caption

The disagreements that emerged at this week's Group of 20 summit in South Korea came as a disappointment to leaders who wanted to build on the cooperation evident at previous G-20 meetings.

At the height of the financial crisis about two years ago, governments agreed on a common course of action and pledged to avoid protectionism. They largely kept those promises and the global economy turned around. But this G-20 summit has left leaders worrying that the recovery is now in jeopardy.

It was clear in the weeks leading up to the meeting in Seoul that this summit was unlikely to be as productive as the ones that preceded it. The sense of an imminent global crisis had passed.

The U.S. and other industrial countries had turned their attention to their own economic difficulties, said Kemal Dervis, vice president and director of Global Economy and Development at the Brookings Institution.

The big developing countries like China, Brazil and India have fared much better since the financial crisis. Dervis, a former treasury minister in Turkey, says the improving conditions in these emerging economies explain their more inward focus.

"They feel that they should just move on, they feel impatient, and they don't necessarily feel threatened the way they felt 18 months ago by the worldwide economic crisis," he said. "So for different reasons, they also are in a somewhat less cooperative mood."

Yet cooperation remains vital. Two big issues loomed over this G-20 meeting. One was the need to address the great imbalance between the big exporting countries like China and the big importing countries like the U.S. One way to do that was to get exchange rates more in line, so that countries weren't undercutting one another in the market pricing of their products.

Another goal was to promote freer trade. British Prime Minister David Cameron was worried enough on the eve of the summit to warn of the dangers of a new era of protectionism.

"Countries would increasingly be tempted to try to maximize their own growth and their own employment at the expense of others," he said. "Globalization, the force that has been so powerful at driving development and bringing huge numbers into the world economy, could go into reverse.

"If we follow that path, we would all lose out."

The final G-20 communique released Friday reaffirmed the intention of countries to work for balanced trade and more currency stability. But the wording was general, without specific commitments.

With no agreement at Seoul to avoid currency wars, governments may now feel freer to seek other advantages against their trading partners. The G-20 leaders did not make evident progress on a new global trade pact, and the U.S. and South Korea failed to reach a trade agreement of their own.

But there is a more positive view of the G-20 summit.

Dervis, who participated in these meetings when he was Turkey's treasury minister, points out that the G-20 process itself is important. Decisions about the global economy are now being made by a broader group of governments than was the case in the past. That, Dervis says, gives these governments more of a stake in those decisions.

"It's true that on trade great progress hasn't been made, but again I think cooperation of the G-20 has helped [countries] not slide back, and I think that's sometimes as important and even more difficult than making progress," he said.

It used to be that the United States and the other big industrial countries could manage world economic affairs on their own. With the growing importance of these G-20 summits, that has changed.

In fact, the biggest news out of Seoul was an agreement to give developing countries a bigger voice in the organization responsible for the world economy: the International Monetary Fund.