Accessibility links
Betting On The Gold Standard? Odds Are Still Long Four decades ago, in the face of deficits and spates of inflation and deflation, President Nixon took the U.S. off the gold standard. Today, with gold prices soaring and the country facing another set of economic challenges, a few are again flirting with the idea of tying our money to gold. But most economists think the idea makes no sense. 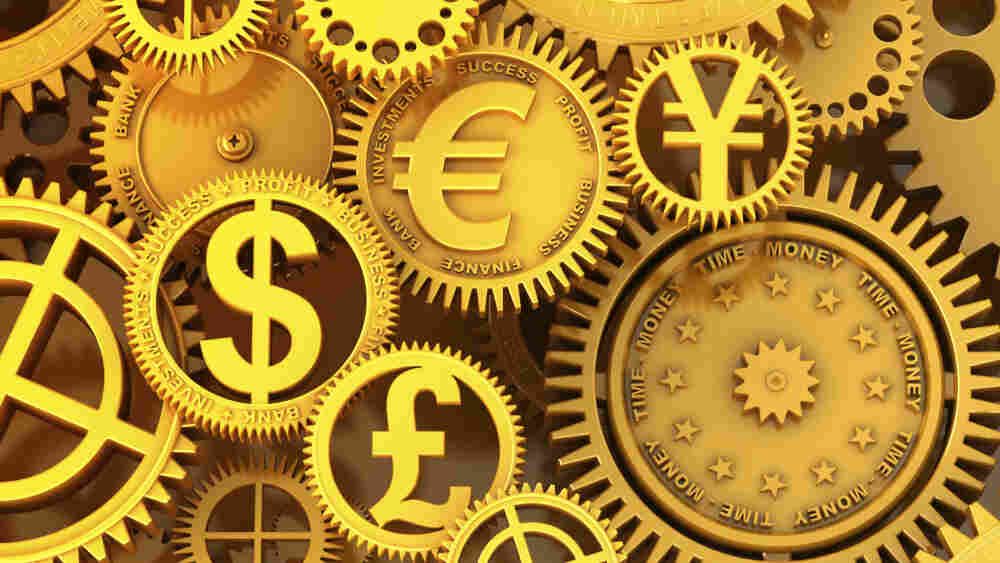 When the price of gold tipped $1,400 a troy ounce this week, the news fit right into a frenzy over the metal ignited by the World Bank president on Monday.

In a Financial Times column, Robert Zoellick wrote that the global economy should consider using the price of gold as an "international reference point of market expectations about inflation, deflation and future currency values."

His statement was immediately taken, in some quarters at least, as a call for a return to the gold standard. Although he later clarified his point, the fire had been lit. And Zoellick, for the moment, became a hero for a small group that believes the U.S. should return to the gold standard. At the same time, he drew ire from mainstream economists tired of having the discussion in the first place.

The U.S. officially went off the gold standard under President Nixon. James Butkiewicz, an economic historian at the University of Delaware, tells NPR's Guy Raz that by the late 1960s, the global economy was volatile, with wild inflation some years and hyper deflation in others. By the end of the decade, he says, there were too many dollars being held in reserves by countries around the world, and their value was dropping. So those countries started to exchange U.S. dollars for gold.

"As our reserves kept dwindling, at some point we had to stop converting the dollar into gold. We weren't going to let our gold stock go to zero. It had already been slashed by roughly 40 percent of the value we had at the end of World War II, so we just didn't want to see it shrink any further," Butkiewicz says. "So people who understood the system, understood the consequences, knew that it had to come to an end."

Butkiewicz says those same people recommended that Nixon abandon the gold standard. The President agreed, but not without trepidation.

"Nixon and [Chief of Staff Bob] Haldeman were concerned that he'd be known as the President that had to leave the gold standard," the historian says. "And he felt that it would be interpreted as a sign of failure on his part."

On Aug. 15, 1971, Nixon announced his decision in a televised address.

And with that, the U.S. abandoned the gold standard -- without any legislation or major discussion. Butkiewicz says it sent shock waves around the world, though it was well-received by the American public.

'The Final Money Of The World'

The candidate even recorded a pro-gold-standard ad, but it never aired -- except by accident in Pennsylvania. Reagan had asked Bell to put the ad aside because economist "Milton Friedman and some of our friends here wouldn't like that, I don't think, if it came out.'"

Thirty years later, Bell is still advocating for a return to the gold standard. He's the policy director at the American Principles Project where he oversees an operation called Gold Standard 2012.

Bell says he's convinced the gold standard is the remedy for the bad economy. He points to other failed initiatives, such as the modified gold exchange standard -- hammered out at the end of World War II at Bretton Woods -- and says the U.S. has simply run out of answers.

"We've tried everything else. ... Right now I think this paper money system is too much based on debt to be able to last much longer," he says. "The other countries that have the dollar as their main reserve currency are screaming bloody murder."

Bell says he'd like to see gold as the "final money of the world."

"It should be what people keep as reserves, the way it was in the hundred years until 1914," he says.

Clearing Out The Coffers

Most economists, however, don't agree with Bell. He says it's because they're inherently resistant to change.

"[The profession is] the last on its block to want fundamental change. If you go back and look at the history ... of 1971 when Nixon pulled us off Bretton Woods, the monetary officials and the academics were for keeping convertibility to gold because they're always for what the status quo is," he says. "When you need to change the status quo, it'll almost always be a populist movement. It'll be something like the Tea Party, I think."

But mainstream economists like Edwin "Ted" Truman say the gold standard is simply a bad idea. Truman, a senior fellow at the Peterson Institute for International Economics who has worked for both the Treasury and the Federal Reserve, says the gold standard never really worked in the first place.

If the U.S. currently employed the gold standard, Truman says, it would have to raise interest rates since the price of gold has gone up by more than $300 an ounce since the end of 2009.

A better solution, Truman says, would be to get rid of gold entirely. The U.S. has more gold than any other country in the world -- more than 8,000 tons. Most of it sits heavily guarded underground at Fort Knox in Kentucky.

The gold doesn't accrue interest, but it does go up in value. And Truman thinks it's high time to sell.

"Maybe it's time to take some profits in the name of the American taxpayer," he says.

If the U.S. -- namely the Treasury Secretary -- did decide to clean out the gold coffers, there's no guarantee it could get the current price, $1,400 an ounce. But if it did, Truman says, the government could make as much as $350 billion.

To avoid disrupting the global gold market, he says, the U.S. could sell a set number of ounces each month for a decade. Other organizations, including the International Monetary Fund, have been selling mass amounts of gold for a while.

Many economists, like Truman, are annoyed a return to the gold standard is even being discussed today by leaders like Zoellick and Senator-elect Rand Paul of Kentucky.

"Why would you want to actually have a system in which you pay people to dig things out of the ground and then bury them in the ground again?" Truman asks. "If that makes sense, that's fine, but it violates my sense of common sense."