Accessibility links
Myanmar's Suu Kyi Wastes No Time After Being Freed Nobel laureate Aung San Suu Kyi jumped right back into politics a day after she was freed from house arrest. The charismatic leader of Myanmar's opposition called for a meeting with the country's ruling junta. Now observers are watching to see how much room the junta will give Suu Kyi for political organizing. 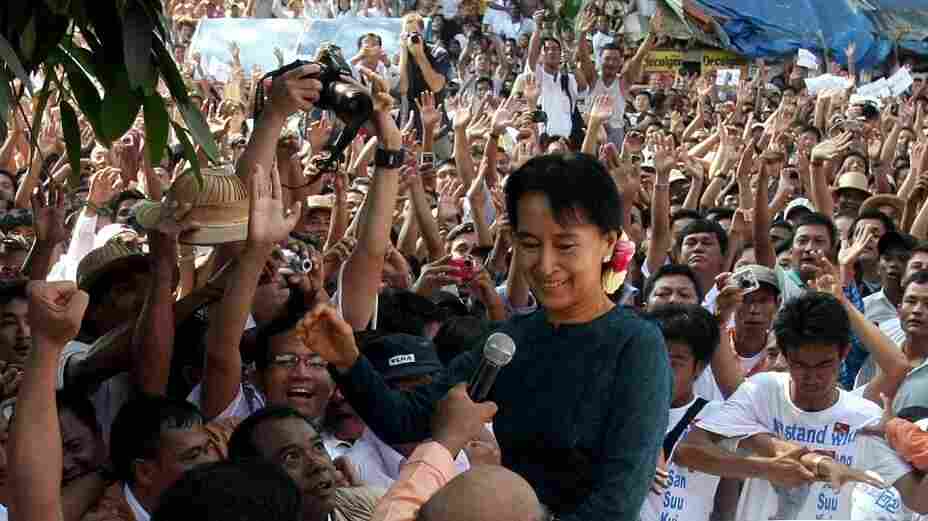 A day after regaining freedom from house arrest, the charismatic leader of Myanmar's opposition, Aung San Suu Kyi, lost no time in jumping back into politics.

Exuberant crowds greeted her Sunday as she arrived to speak with diplomats, reporters and members of her party, the National League for Democracy (NLD). Suu Kyi said she wanted to speak directly with paramount leader Gen. Than Shwe. And, she said, if the people of Myanmar wanted her to, she would work to end international sanctions on her country.

She also indicated that she was willing to help unite the fractious opposition factions in Myanmar, the country formerly known as Burma. Dr. Than Nyein, chairman of the opposition National Democratic Force (NDF), welcomed her message.

"We are very, very happy that she is released," he said by phone from Rangoon. "And not only that, we have great expectations that she might be able to lead to conciliate all the different forces in our country."

The NDF split from the NLD in order to compete in last week's elections, which were swept by junta-backed candidates amid charges of widespread vote rigging. Myanmar authorities banned the NLD last year after it decided to boycott the elections. Both Suu Kyi and the NDF have said they plan to investigate the vote rigging.

Soe Aung is a spokesman for the Forum for Democracy in Burma, a Thailand-based civic group that conducts human rights training and community organizing in Myanmar. He says Suu Kyi's charisma is matched by her political skills.

"People of Burma, not only the Burman majority but also the ethnic minorities, have trust and faith in her," he says. "It's not only because she's the daughter of our independence hero, Gen. Aung San. But she also has the skill and ability to gather all the people, be united under one umbrella and to work together for the country."

Myanmar's military has recently launched offensives in the country's border areas against ethnic rebel forces fighting for autonomy in a federal union. The fighting drove thousands of refugees to seek temporary shelter over the border in the Thai town of Mae Sot.

Zipporah Sein, general secretary of one of the ethnic groups, the Karen National Union, says they are now looking to Suu Kyi for help.

"We hope that Aung San Suu Kyi could talk to the military about this, for stopping the offensive against the ethnic people," she says.

Soe Aung notes that the government has responded violently several times in the past to Suu Kyi's political organizing. In 2003, for example, a government-organized mob attacked Suu Kyi's convoy in northern Myanmar, killing more than a hundred of her supporters and fellow party members.

"We are very much concerned that there is a repeat of another attempt on her life and her party members this time again," he confides, "because we have heard that there are government-backed thugs -- so-called people's militia are gathering around."

Suu Kyi said Sunday that she hoped the government would not see her popularity as a threat. She added that despite 15 years under house arrest, she bore no grudges against her captors. On a personal note, she said that she was eager to hear human voices, after so many years of just listening to the radio.