Accessibility links
Out Of The Closet ... In The Pulpit Of A Megachurch A few weeks ago, Bishop Jim Swilley sat down in front of his congregation at Church in the Now, near Atlanta, and told them a secret he's been holding onto for almost 50 years: He's gay. 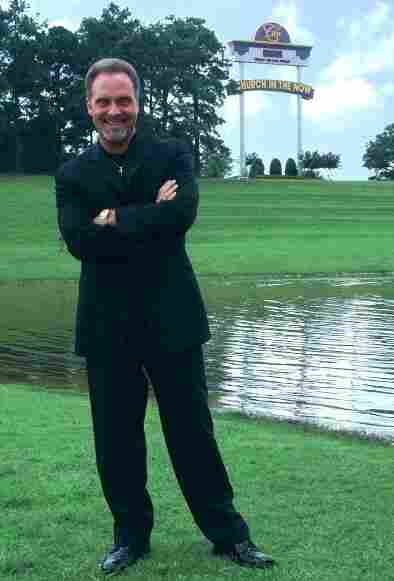 Swilley says there have been two constants in his life: his call to preach, and his sexual orientation. Church in the Now hide caption

toggle caption
Church in the Now

A few weeks ago, Bishop Jim Swilley sat down in front of his congregation at Church in the Now near Atlanta to get a few things off his chest.

"There are two things in my life that are an absolute," the megachurch pastor told his flock. "I did not ask for either one of them, both of them were imposed upon me, I had no control over either of them.  One was the call of God on my life... and the other thing ... was my sexual orientation."

Jim Swilley -- a twice-married father of four, a man who comes from a long line of evangelical preachers -- revealed a secret he'd been holding onto most of his life:

Not A Conventional Marriage

Swilley tells NPR's Guy Raz that it was his ex-wife Debye who encouraged him to come clean. Though they're recently divorced after 21 years of marriage, she still works and preaches alongside Swilley at Church in the Now.

The pastor says he told her he was gay before they married, thinking it would be the end of their relationship. "But she said no, let's get married, we'll work it out.  And to a degree, we did."

But a couple of years ago, Swilley says, Debye came to him and told him it was time to get real.

"She said, look, I love you and I'm never going to hurt you with this, I've always got your back, but you and I both know we don't have a conventional marriage... You tell everybody else to be real ... but you don't allow yourself the same grace that you give everyone else... I think you need to tell everybody what the truth is and let the chips fall where they will."

Swilley says he never wanted to go public about his sexual orientation, even after his wife confronted him. He told his children, and they were supportive, and that was as far as he went.

But then, the recent wave of gay teen suicides hit the news. Swilley says he was particularly moved by the case of Tyler Clementi, the Rutgers student who jumped off the George Washingon Bridge after his roommates filmed him having sex.

"I would hear people nearly imply that he deserved it, you know, people would say he shouldn't have been in an act of perversion." Swilley says.  "And when I started hearing that, especially from people who professed to be Christ-like, I don't know. Something changed."

Swilley had never preached against homosexuality or the gay community, but he knew he had to go further. "I felt like, with me not saying at least my little part of it, I end up being part of the problem."

So one recent Wednesday evening, he sat down in front of his congregation and told them his story.  Many walked out during his sermon, but many others stayed.

"I've had people in my church come to me and say, if this had been anybody but you, I would have just had a knee-jerk reaction and not even considered hearing them out," Swilley says. "But you've been my pastor for a quarter of a century.  I know you... so if you say that you are, and you know you were born this way, then that changes everything."