Accessibility links
'The Autobiography Of Mark Twain': Satire To Spare After 100 years, the long-awaited Autobiography of Mark Twain, Volume 1 has emerged. The author dictated his life story to a stenographer, whose notes and papers have been collected into the first of three volumes of Twain's memories, witticisms and biting political satire. 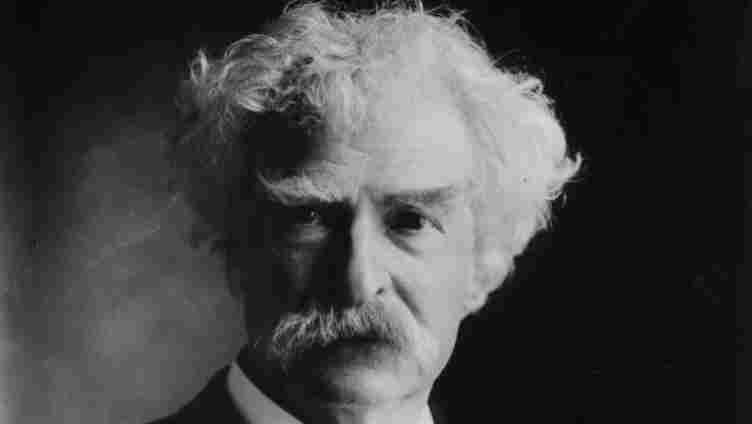 Mark Twain changed the rules of American fiction when, in Huckleberry Finn, he let a redneck kid tell his story in his own dialect. But the brilliant satirist had a hard time figuring out what rules to break as he struggled for years to tell his own life story. Now, 100 years after his death, Mark Twain's autobiography is being published the way the author himself wished -- from dictated stories collected by the University of California, Berkeley's Mark Twain Project. The first volume (of three) is out now, and the long-anticipated release is drawing attention from Twain-lovers around the world.

You will never know how much enjoyment you've lost until you get to dictating your biography.

'Wander At Your Free Will All Over Your Life'

Twain knew early on that he wanted to write an autobiography, but his first efforts to put his story on paper failed. He attributed his troubles to trying to follow a chronological calendar; a plan that, he wrote, "starts you at the cradle and drives you straight for the grave, with no side excursions permitted."

Then, in 1904, Twain hit upon the right way to tell his story. "Start at no particular time of your life," he wrote. "Wander at your free will all over your life; talk only about the thing that interests you for the moment; drop it at the moment its interest starts to pale." Naturally, he couldn't resist a comic hyperbole, adding, "It's the first time in history such a method has been discovered."

But Twain still couldn't wrap his head around how to tell the tale of his life -- that is, until a few years later, when he wrote to his friend William Dean Howells about another eureka: dictation. "You will never know how much enjoyment you've lost until you get to dictating your biography," he wrote. "You'll be astonished at how like talk it is and how real it sounds."

Twain first tried dictating into Thomas Edison's new recording machine but didn't like it -- he was a man who strutted stages all over the world, delivering extemporaneous spiels. Twain needed a live audience to speak to, not a bloodless machine. He eventually found that audience in stenographer Josephine Hobby and author Albert Bigelow Paine, his first biographer.  Paine says Twain often dictated from his bed, clad in a handsome silk dressing gown of rich Persian pattern, propped against great snowy pillows. He also got up, paced the floor and waved his arms as he poured out nearly 2,000 pages of typescript over three years. 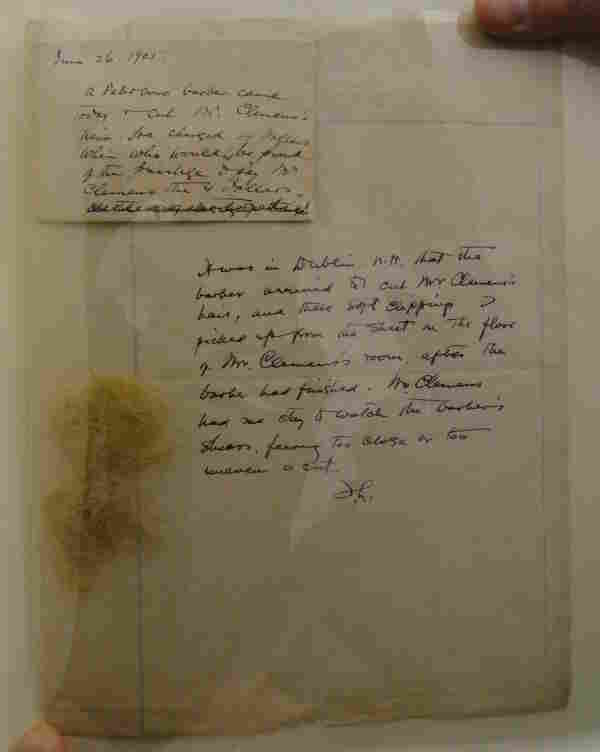 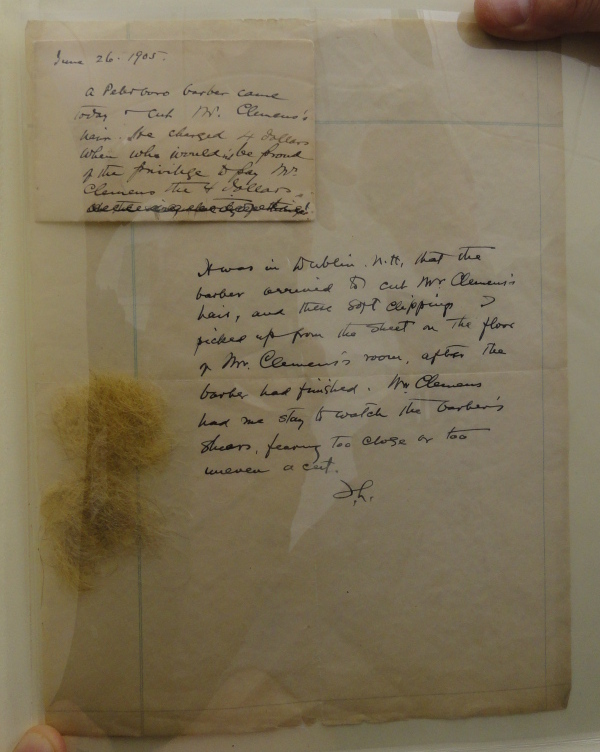 A lock of Twain's hair, from the UC Berkeley archive.

'He Was Capable Of Composing Entire Paragraphs In His Head'

Robert Hirst, director of the Mark Twain Project, spoke about the resulting "talked" autobiography, which follows a less linear path than a more traditional written work. "If you think about it, this is really the culmination -- Mark Twain comes out of an oral tradition of humor," says Hirst. "And if you look at any of the books, you'll see this method of digression, even in Huck Finn -- basically it's a trip with digressions, strung off it like beads, beads on a string."

Inside the temperature-controlled room that houses the largest collection of Twain papers in the world, Hirst explains that Twain made only minor corrections on the stenographer's dictated notes. The elegant structure of Twain's autobiographical dictations shows that the writer was able to translate complex ideas into spontaneous speech. "The evidence is that he's capable of composing entire paragraphs in his head," says Hirst. " I have editors who would come in and say, 'Listen to this,' and they would read it to me. They couldn't believe that somebody could dictate that." 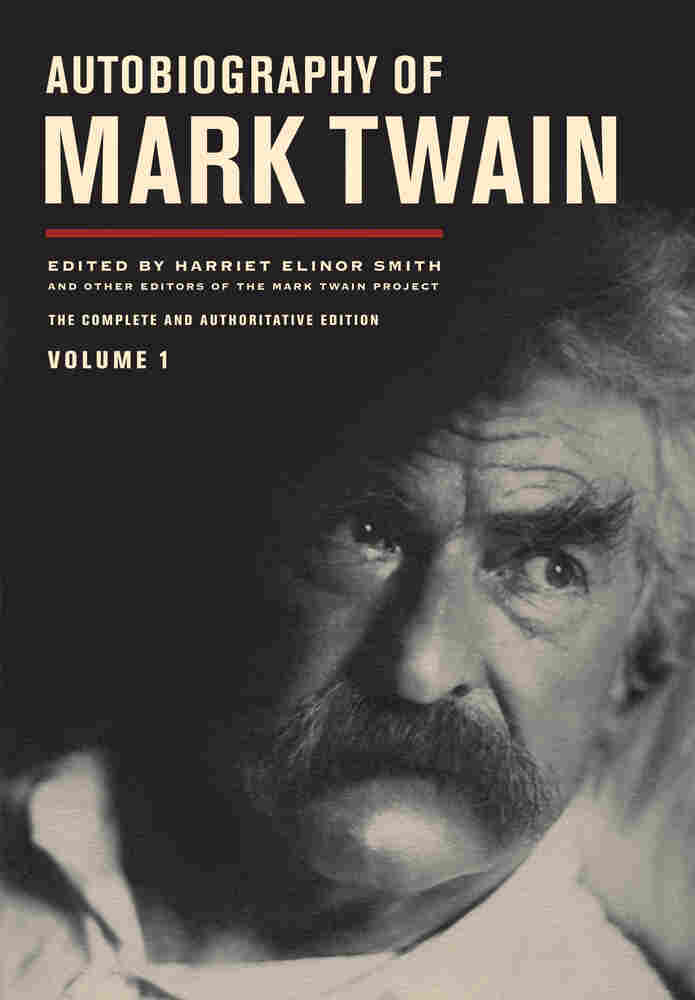 In the autobiography itself, Twain mixes news and history, using something from the "infernal newspapers" as a jumping-off point for his dictation. For example, the American war in the Philippines was still going on in 1906, and Twain read that American troops cornered 600 of the Moro tribe, including women and children, in a volcanic crater. Leonard Wood -- Twain called him Theodore Roosevelt's "fragrant pet" -- gave the order to "kill or capture" the 600.

"Apparently our little Army considered that the 'or' left them authorized to kill or capture according to taste," Twain dictated. "And that their taste had remained what it had been for eight years, in our army out there ... the taste of Christian butchers."

But while the autobiography contains many such bare-knuckle outbursts, you won't find many revelations about Twain's inner moral struggles. Three months into the dictations, he says, "I have thought of 1,500 or 2,000 incidents in my life which I am ashamed of, but I have not gotten one of them to consent to go on paper yet."

"So he has realized that he's not a confessional autobiographer," says Hirst. "That's not what this is."

'You Can't See The Whole Thing For A Hundred Years'

Still, despite his lack of emotional confessions, Twain did say things in the first draft that his biographers and his daughter felt were too personal or too scalding to print in the early editions of the autobiography. As legend has it, Twain wanted people to wait 100, or even 500 years until after his death to see specific passages.

In spite of these efforts at suppression, however, most of the autobiography has surfaced over the years, and the supposed "embargo" has only led to increased interest in and sales for the book.

If you say here’s a little bit of the autobiography, but you can't see the whole thing for a hundred years, you're gonna sell a book.

"I would say, can you spell marketing plan?" jokes Hirst. "If you say here's a little bit of the autobiography, but you can't see the whole thing for a hundred years, you're gonna sell a book. Mark Twain knew how to sell a book." 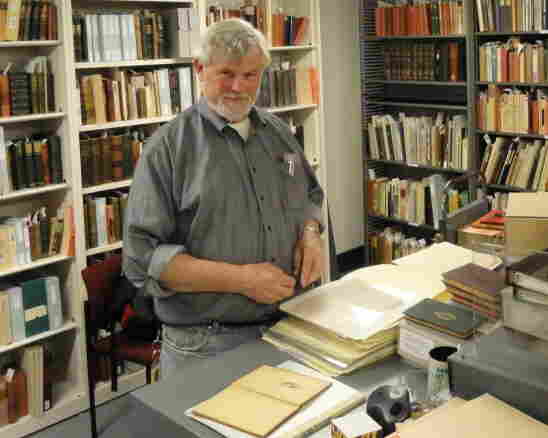 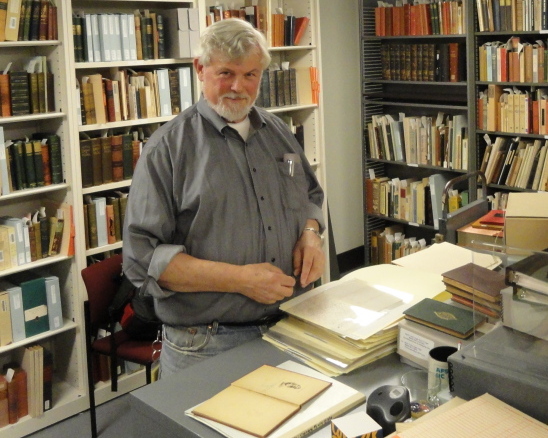 Hirst also emphasizes that this new edition follows Twain's own design, while previous editions have been rearranged by editors who thought they had a better idea. The new edition also includes the numerous false starts Twain made before he settled into the dictation, so the reader might find it a bit of a slow read at times.

On Watermelons As A Metaphor For Life

"I know how a prize watermelon looks when it is sunning its fat rotundity among pumpkin vines and 'simblins;' I know how to tell when its ripe without 'plugging' it; I know how inviting it looks when its cooling itself in a tub of water under the bed, waiting; I know how it looks when it lies on the table in the sheltered great floor-space between house and kitchen, and the children gathered for the sacrifice and their mouths watering; I know the crackling sound it makes when the carving knife enters its end, and I can see the split fly along in front of the blade as the knife cleaves its way to the other end; I can see the halves fall apart and display the rich red meat and the black seeds, and the heart standing up, a luxury fit for the elect; I know how a boy looks, behind a yard long slice of that melon, and I know how he feels for I have been there. I know the watermelon which has been honestly come by and I know the taste of the watermelon which has been acquired by art. Both taste good, but the experienced know which tastes best."

On Not Sweating The Small Fries

"This book is not a revenge-record. When I build a fire under a person in it, I do not do it merely because of the enjoyment I get out of seeing him fry, but because he is worth the trouble. It is then a compliment, a distinction; let him give thanks and keep quiet. I do not fry the small, the commonplace, the unworthy."

On James W. Paige, Inventor Of A Typesetting Machine In Which Twain Invested

"…the little bright-eyed, alert, smartly dressed inventor of the machine, is a most extraordinary compound of business thrift and commercial insanity; of cold calculation and jejune sentimentality; of veracity and falsehood; of fidelity and treachery; of nobility and badness; of pluck and cowardice; of wasteful liberality and pitiful stinginess; of solid sense and weltering moonshine; of towering genius and trivial ambitions; of merciful bowels and a petrified heart; of colossal vanity and -- But there the opposites stop. His vanity stands alone…"

On A Maid He Called "Wuthering Heights"

"Her talk is my circus, my menagerie, my fireworks, my spiritual refreshment. When she is at it I would rather be there than at a fire. She talks but little to me, for I understand only about half that she says, and I have had the sagacity not to betray that I understand that half…"

On His Autobiography Plan

"It is a system which is a complete and purposed jumble -- a course which begins nowhere, follows no specific route, and can never reach an end while I am alive, for the reason that if I should talk to the stenographer two hours a day for a hundred years, I should still never be able to set down a tenth part of the things which have interested me in my lifetime."

On Hartford Bliss Of The American Publishing Company

"The house, very much against his will, forced him to ascend the platform and introduce me. He stood thinking a moment and then said:

'I don't know anything about this man. At least I know only two things: one is, he hasn't been in the penitentiary, and the other is (after a pause, and almost sadly), I don't know why.'

That worked well for a while, then the newspapers printed it and took the juice out of it, and after that I gave up introductions altogether."

On Forming An Opinion

"In the matter of slavish imitation, man is the monkey's superior all the time. The average man is destitute of independence of opinion. He is not interested in contriving an opinion of his own, by study and reflection, but is only anxious to find out what his neighbor's opinion is and slavishly adopt it."

"It is the will of God that we must have critics, and missionaries, and Congressmen, and humorists, and we must bear the burden. Meantime, I seem to have been drifting into criticism myself. But that is nothing. At the worst, criticism is nothing more than a crime, and I am not unused to that."

Excerpted from Autobiography of Mark Twain, Vol. 1 by Mark Twain. Edited by Harriet E. Smith. Copyright 2010 by the Mark Twain Foundation. Excerpted by permission of University of California Press. 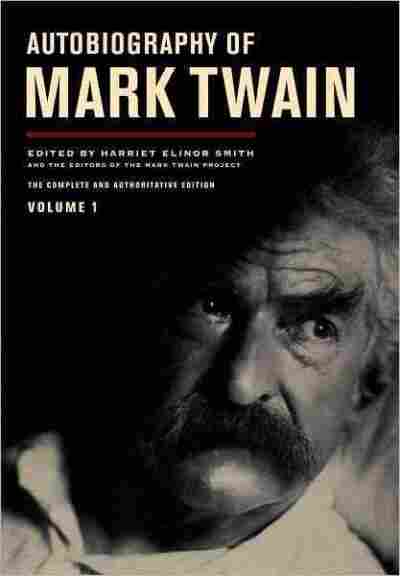