Accessibility links
U.S. Lays Out New 'Transition' Strategy For Afghanistan The Obama administration's plan would begin a troop withdrawal from Afghanistan next summer, but keep a sizable force on the ground until 2014. That kind of compromise may not appease both hawks and doves. 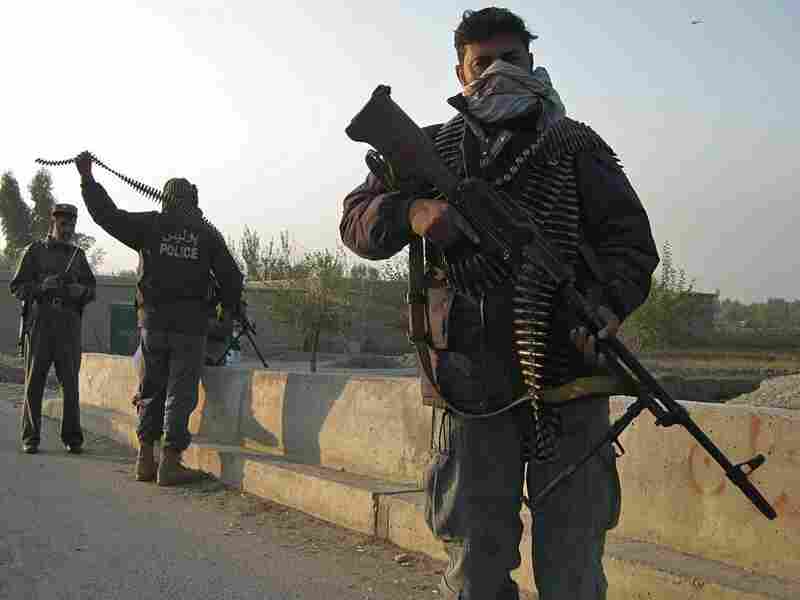 Afghan national policemen during a clash with Taliban fighters near Jalalabad airport on Saturday. Under the Obama administration's new timetable for Afghanistan, security duties in selected areas would be transferred to Afghan forces over the next 18 to 24 months. AFP/Getty Images hide caption

﻿The Obama administration is changing its timetable for Afghanistan, beginning a phased reduction of troops next summer with the aim of ending the combat mission by 2014.

President Obama is navigating a delicate path at home and abroad in the nine-year-old war. The new plan -- which a senior Obama aide said is "not an exit strategy" -- appears to be a middle course.

December — Obama administration completes its internal review of the war

July 2011 — Scheduled date for U.S. to begin a drawdown troops from Afghanistan

Summer 2011 — Canada may withdraw its troops from southern Afghanistan

But whether it will please either those favoring an ongoing commitment to the war there, or those seeking a U.S. withdrawal, remains open to questions.

President Hamid Karzai publicly criticized the U.S. over the weekend, saying he wanted a more limited American military role in his country, while NATO allies have grown increasingly skeptical of the mission. Yet in Washington, Republicans on Capitol Hill have signaled their concern that the administration would pull out troops too soon and fail to finish the mission to subdue Taliban militants.

Richard Holbrooke, Obama's special envoy for Afghanistan and Pakistan, outlined the strategy in remarks Monday in Pakistan. Under this "transition strategy," the U.S. would begin pulling out combat troops next July, as per Obama's previously stated plan.

But a sizable contingent of combat troops would remain in Afghanistan until 2014. Following that date, some Western troops would continue to train the Afghan military and police. The U.S. currently has about 100,000 troops in Afghanistan.

"One thing you can be sure of is that there will be some drawdown by July of next year," Holbrooke said. "This does not mean the international force will leave completely, and it definitely does not mean we're going to repeat 1989, when the U.S. turned its back on Afghanistan as soon as the Soviets left."

Republicans, led by Sen. John McCain of Arizona, have already signaled their intention to push back against any troop withdrawal next summer.

The administration also recognizes that although it has never specified the scope of next summer's drawdown, allies and enemies in the region interpreted the deadline as a signal that the U.S. commitment in Afghanistan was limited.

Holbrooke was careful in his remarks to say that the new plan represents not "an exit strategy but a transition strategy." He emphasized that there would be a continuing international presence in Afghanistan after 2014, including U.S. and coalition troops acting as trainers.

Malou Innocent, a foreign policy analyst with the libertarian Cato Institute, calls the administration's new plan "an attempt by the U.S. to save face."

Obama has "sold this war as the 'good war,'" she syas, and devoted considerable resources to it, including two sizable buildups of troops on the ground since taking office.

Still, Innocent says, "There's a realization that there's an enormous chasm between what we hoped to achieve, and the resources available."

Delaying the mass of troop withdrawals for at least three more years represents an effort to buy more time for the central government in Afghanistan to build up its capacity to provide both security and basic services.

"While we expect a transition to an Afghan lead (on security), we also expect the second theme to be that Afghans will not have to stand alone," a senior administration official said last week in a background briefing for reporters.

The official was referring to an administration review of progress in the war in Afghanistan that is expected to be completed by the end of the year.

The review may trigger another round of domestic debate about whether the U.S. is achieving its goals in that country. House Democrats have already signaled their displeasure with the war through a series of votes.

Having lost their majority, House Democrats will have less sway over the debate. Republicans have been generally supportive of the war effort and are unlikely to hold further votes demanding withdrawal.

But the moderate and conservative Democrats who were most supportive of Obama's strategy took a disproportionate share of the losses in the Nov. 2 elections.

"The fact is that the House caucus is more liberal," says James Lindsay, senior vice president of the Council on Foreign Relations. "You're losing the voices in the Democratic caucus who would have counseled against legislation to demand the end of fighting in Afghanistan."

Obama is attempting to square a political circle, offering up a concrete plan for withdrawing troops for those who favor winding down the war, while making it clear to those who oppose withdrawal that decisions about troops will always be predicated on conditions on the ground.

But in addition to trying to please critics on both his left and right at home, Obama will face challenges promoting this modified strategy abroad. NATO allies have grown arguably more skeptical about the war's prospects for success than U.S. public opinion.

The president also has to address concern – or hope – in the region that the U.S. commitment remains time-limited, despite the apparent extension to a war already entering its tenth year. In recent days, administration officials have been at pains to emphasize that next July's troop drawdown did not signify an end to U.S. engagement.

And Obama has to wrestle with the difficulty of working with a restive ally.

In an interview published in The Washington Post Sunday, Karzai said the U.S. military needs to reduce its visibility in his country.