Accessibility links
The Housing Dilemma: It's Holding Workers Back The inability to sell, rent or refinance a home could become one of the biggest obstacles to matching talent with the right job. Experts say more people could face the dilemma of choosing between a job and a house -- especially if the job market improves faster than the housing market. 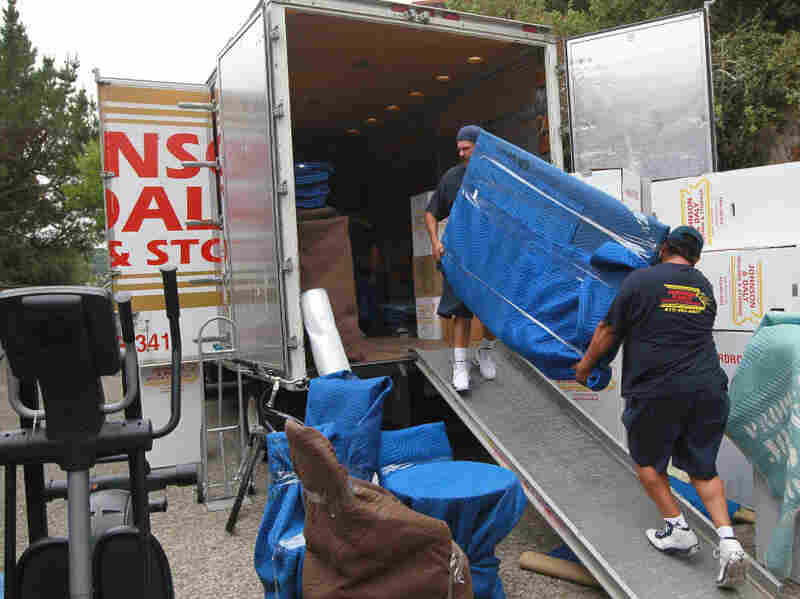 Companies report that many employees are reluctant to relocate because of the depressed housing market. Justin Sullivan/Getty Images hide caption

More and more people could face the dilemma of choosing between a job and a house -- especially if the job market improves faster than the housing market.

Joblessness is a drag on the housing market, with many people no longer able to afford their homes. But the reverse is also true; a house that's lost value can prevent someone from taking a job that requires a move.

Although recruitment has been down over the past few years, some experts say the inability to unload homes could become one of the biggest obstacles to matching talent with the right job. Experts say more and more people could face the dilemma of choosing between a job and a house -- especially if the job market improves faster than the housing market.

Jim Mallozzi, CEO of Prudential Real Estate and Relocation Services, which contracts with corporations and government agencies to handle logistics for moving employees, says he already sees that dynamic at play.

"More people are reluctant to move," he says. "The inability to sell their house or having negative equity is probably now the No. 1 reason why people are refusing a move."

Top Reasons Why Employees Are Reluctant To Relocate

More than 90 percent of the companies with problems relocating employees said the housing market at the old location was the primary reason workers were reluctant to move. The list of reasons is based on 95 companies experiencing problems with employees reluctant to relocate.

People are more often turning down jobs or relocating and leaving their families behind, he says. Government agencies that previously relocated workers every two or three years are extending those terms because many people can't afford the move.

Prudential's business has shifted from handling the move itself, to consulting with workers who are trying to decide whether to move for the job at all.

Mallozzi is quite familiar with this dilemma: He's relocating himself.

"I'm in the middle of one right now from the East Coast to the West Coast," he says. Mallozzi is having some of the very same issues he encounters with his clients. He's still trying to work out whether to sell the house and move his family -- or to travel back and forth instead.

Held Back By Housing

In Mallozzi's case, the house isn't holding back his career. But among Prudential's clients, he says, a growing number of people back out of plans to move for their company. He says that number has gone from 5 percent a few years ago to 35 percent -- largely because they feel held back by housing.

In fact, a study by a trade group called Worldwide ERC found that three-quarters of employers find growing reluctance among workers to move -- again, largely because their homes have lost value.

Deciding To Ditch A Home

Andrea Davis and her family have experience with this. Two years ago, Davis' husband was offered a very good aircraft mechanic's job in North Carolina. He took it, initially, but because they were unable to sell, rent or refinance their home in Albuquerque, N.M., he quit and moved back.

"I felt trapped," Davis says. "It just got worse over time."

Recently her husband was offered the same job again, and this time they decided to ditch the New Mexico house -- though not without huge regrets.

Read More About The Impact Of The Housing Market On Jobs, Family

"It was really hard to walk away from that house yesterday," Davis says, breaking down in tears. After years of making on-time payments -- even as their interest rate soared to over 12 percent -- Davis says they just missed a payment for the first time.

"I think people are just going to loot it," she says. "I feel afraid for that. I feel like I'm making the neighborhood worse because I'm leaving it."

But Davis said they felt they had no choice. They couldn't afford not to take the new job.

Robert Damon, president of North American operations for the executive-recruitment firm Korn/Ferry International, says even top executives are finding it hard to sell their homes to relocate.

"Companies are avoiding [the problem] by allowing the executive to commute for a year or two," he says.

But Damon says with the job market recovering faster than housing, companies will have to reverse the trend of reducing relocation and moving benefits, and spend more to attract the talent they want.

"Companies are going to have to start making good on any of the money they lose on houses, and also give them assistance on the houses they buy," Damon says.