Accessibility links
Cuts To University's Humanities Program Draw Outcry Facing drastic budget cuts, the State University of New York at Albany has suspended student admissions to the French, Italian, Russian, classics and theater programs because of low student enrollment. The announcement has provoked a debate on the value of a humanities education. 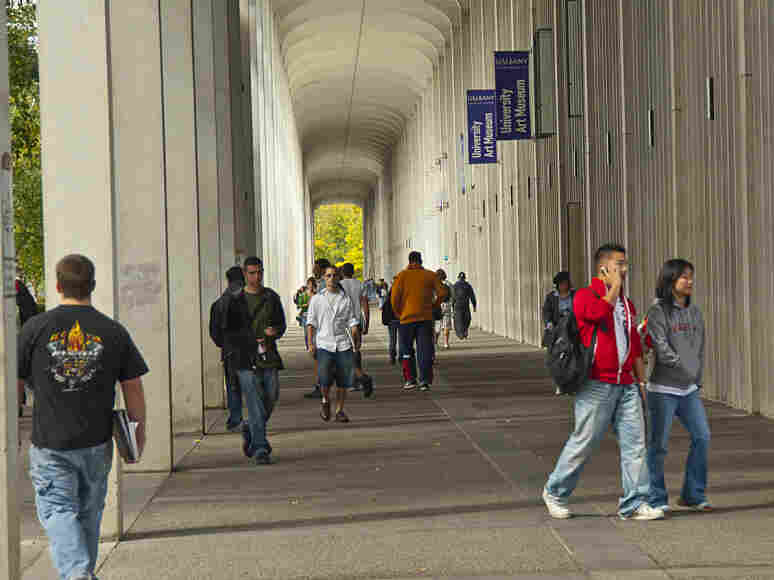 Public colleges and universities across the country are under the gun as state budgets face huge shortfalls. Universities are now ending low-enrollment programs and increasing class size.

The State University of New York has had to cut $640 million from its budget, and the president of its Albany campus recently announced the suspension of five humanities programs, including French, Italian, Russian, classics and theater.

Although there have been cuts at SUNY Albany in everything from journalism to business, the fact that five humanities programs have been suspended has resonated with the public and the press.

Upon learning about the suspension of the foreign language programs, David Wills, a professor of French, was shocked at first, but then he was angry.

"None of us accepted that it was something that a university could do and still call itself a university," Wills said. "This is not a university if you only have one non-English European language program left standing."

To be fair, students can still take some classes in these subjects. Suspension means new students will not be able to major in these areas, at least for now. 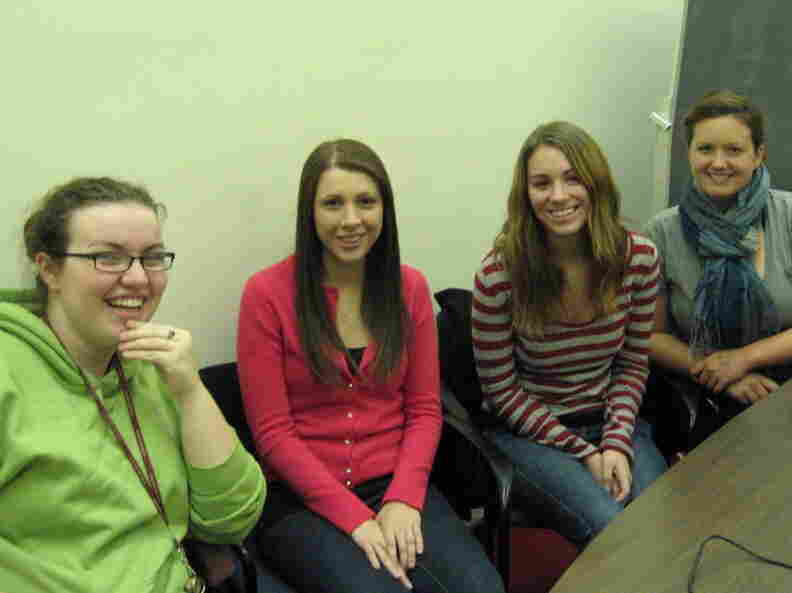 SUNY Albany students Jessica Stapf (from left), Alexandra Cialeo, Michelle Lach and Beth Conkey are among the current French and Italian majors at the school. Both language programs, along with Russian, classics and theater, have been suspended because of low enrollment. Courtesy of David Wills hide caption 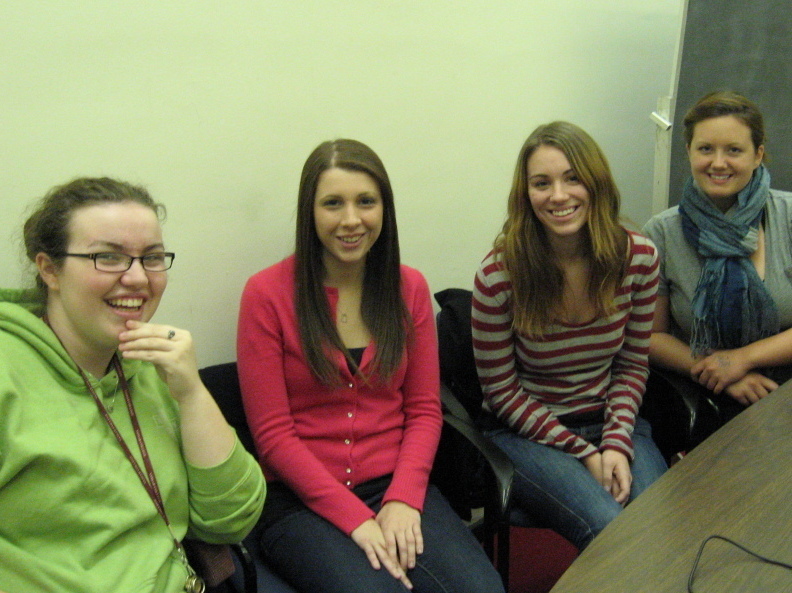 SUNY Albany students Jessica Stapf (from left), Alexandra Cialeo, Michelle Lach and Beth Conkey are among the current French and Italian majors at the school. Both language programs, along with Russian, classics and theater, have been suspended because of low enrollment.

'The World Within Reach'?

Juniors and seniors at SUNY Albany will be able to finish their majors in French, Italian, Russian, classics and theater. But most freshmen and sophomores will have to choose alternatives.

Alexandra Cialeo, a sophomore majoring in Italian, transferred to SUNY Albany a few months ago. Noting that SUNY Albany's slogan is "The World Within Reach," Cialeo asks, "How is the world within reach when a school is going to take away the foreign language department so you can't communicate around the world?" She says the program suspensions sadden her because she wants to be a teacher and has a passion for Italian.

SUNY Albany Provost Susan Phillips says up until now, cuts in the humanities have been 4 percent -- less than in other areas. She says there have been more faculty losses in the social sciences and in the professional schools. And she emphasizes that no decisions have yet been made to close down these programs permanently.

But that's not how it feels to Victoria Savino, a senior with a minor in classics. Reading Latin changed her "entire mentality for the rest of college," she says. "I will now read my children Ovid before they go to sleep, before I read them Dr. Seuss," Savino adds.

Savino says she gets mad when she sees campus buildings that seem perfectly fine being renovated, while "[she] can't study what [she wants] to study."

The Politics Of Public Higher Education

But Julie Gondar, a senior majoring in public policy and the president of the student assembly, says many students do not understand the budget complexities. For example, construction is a separate fund.

Gondar sympathizes with the students who came wanting to major in these programs, but the real battle is with the Legislature. "My tuition needs to be going back into the SUNY system, and into the campus I am going to," she says. 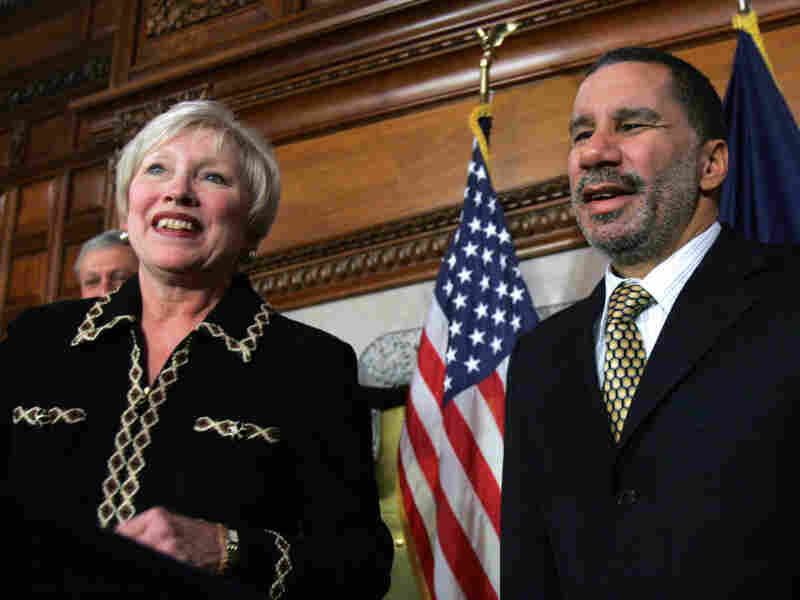 A bill crafted by SUNY Chancellor Nancy Zimpher, New York Gov. David Paterson and the state's budget office to increase revenue within the SUNY system was recently rejected by the state Legislature, which decides how much of collected student tuition goes back to each campus. Mike Groll/AP hide caption

In New York and a few other states, the state takes the tuition, and the legislature then decides how much of it goes to each campus within the state's public university system.

Nancy Zimpher, the chancellor of the entire 64-campus SUNY system, says the state of New York reappropriates tuition to SUNY, and in the last session, only returned 10 percent. "That to me sounds like a tax on people who are seeking to better themselves through higher education," she says.

Zimpher, New York Gov. David Paterson and the state's budget office crafted a bill that would have allowed the SUNY system to raise tuition, create different tuitions at different campuses, and create public-private partnerships in order to raise revenue. The Legislature said no.

In the future, Zimpher says, SUNY students will be able to get the offerings they want at other campuses in the system within driving distance.

But that does not answer Victoria Savino, who says she learned the most in a Latin class with two other people. As for her sociology lecture class with 300 students, she says, "That class is really popular, but I haven't learned one thing."

More On The Cost Of Public Universities

One Year Of Public College Can Now Cost $50,000 In California

Fellow student Jessica Stapf says she is going to get through SUNY Albany no matter what. Although she is a freshman, she won an appeal, met with numerous advisers and will finish her French requirements by 2012.

"My dreams mean more than anything else," she says. "I'm not going to let them stop me."

SUNY is not the only place where the pie is getting smaller. Louisiana State University is grappling with severe cut backs, and the governor of Missouri has told the state universities to cut under-enrolled majors.

And perhaps the reason these cuts in the humanities at SUNY have garnered so much attention is because of a fear that these disciplines are less career-oriented than business and technology, less valued in a world dominated by the bottom line.