Accessibility links
Employers Pickier About Job Applicants' Skills Employers have millions of jobs they're trying to fill, but it's not so easy in some cases. That's because the skills job applicants have don't always match what companies are looking for. Employers now want to hire people who can hit the ground running. 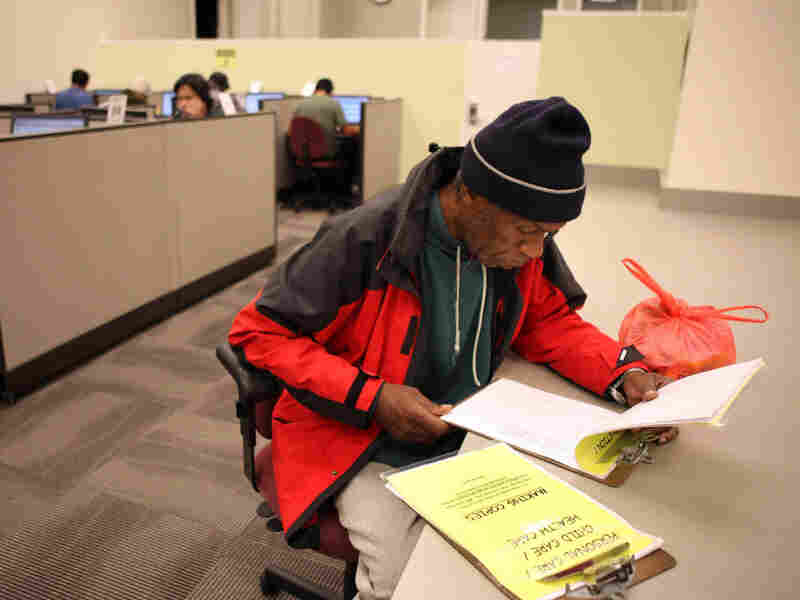 Employers have millions of jobs they are trying to fill. But in some cases, they are having trouble.

How can that be with 15 million Americans out of work and looking for jobs?

Part of the answer lies in the mismatch between the needs of the employers and the skills job seekers have to offer.

Few professions have been hit harder in this economy than architects. In Seattle alone, thousands of them are out of work. "I know everything there is to know about building a building from a garage in your backyard to a high-rise in downtown Seattle," says Gary Barber, a practicing architect for 30 years. "I have that experience and skill set."

There are fewer jobs in other parts of the economy too -- consider the plight of travel agents, newspaper reporters and midlevel managers.

The skills job applicants have often don't match what employers are looking for, says Ed Beaulieu, president of West Coast Careers, a recruiting and staffing company. "Now you've got a segment of the population that doesn't have a chair to sit in," he says.

Many of the chairs that are now being filled are in highly technical and specialized fields. And it's not that easy to transition from being an architect to a software engineer, or from an escrow officer to an airplane mechanic.

Boeing, for example, hired more than 5,000 people this year. Glenn Cook, director of staffing for the aerospace company, says it will hire about twice that many next year. With an increase in the production rate of the 787 and a new facility in South Carolina, he says Boeing needs more engineers and more mechanics.

"What we really want to do is hire people with experience so they can hit the ground running and help us out immediately," Cook says.

It's a refrain you often hear from employers.

Peter Cappelli, a management expert at the Wharton School of the University of Pennsylvania, says it didn't used to be this way. "A generation ago you would never expect that somebody could come into a reasonably skilled, sophisticated position in your organization and immediately make a contribution," Cappelli says. "That's a brand new demand."

And for those on the sidelines without a job it's a troubling requirement.

Hiring managers are under enormous pressure to make sure the people they bring in are the very best. So, they are less likely to take risks and less likely to say, "Hey, this guy's skills aren't a perfect match, but he looks like a quick study -- let's give him a try."

Career coach Matt Youngquist has seen highly talented individuals get stymied because -- although they had 20 years of experience and fabulous references -- they didn't have a college degree, and the hiring criteria required one.

Experts say that companies often leave jobs unfilled if they can't find exactly what they are looking for.

Living In The Past

But while companies have become a lot pickier, the unemployed sometimes sabotage themselves.

Youngquist, the CEO of Career Horizons, says some job hunters are living in the past, turning down jobs because they think they're worth more than employers are willing to pay.

He says they're expecting to make what they did five or 10 years ago.

"No one wants to take a pay cut, but some people have to be more adaptable," Youngquist says.

Extended unemployment benefits are also having an impact. Some observers suggest that human capital is being wasted when people don't even bother to look for jobs because they're getting benefits.

For all these reasons -- and more -- millions of people remain unemployed.

Ever the optimist, architect Barber is exploring the possibility of transferring his skills to a new field. Right now, he doesn't know exactly what he will do, but he's restless and eager to be back at work.