Accessibility links
The Root: Getting The Best Teaching Tools To Schools Educating children in poor communities is often thought of as a challenge to be taken on by only the most dedicated teachers. John McWhorter of The Root says that in fact, the most effective methods have already been discovered. Now they just need to be used in schools.

The Root: Getting The Best Teaching Tools To Schools

The Root: Getting The Best Teaching Tools To Schools 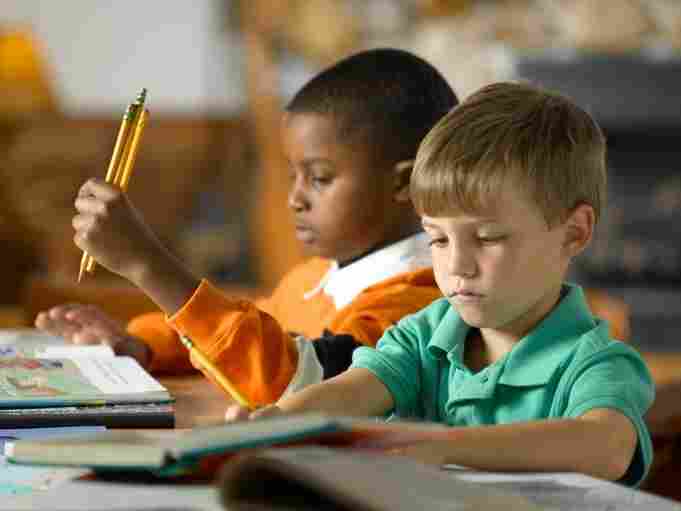 For some, teaching children to read can be a challenge, but others insist that the best teaching methods already exist. iStockphoto.com hide caption

John McWhorter is a regular contributor to The Root. He is the author of Our Magnificent Bastard Tongue: The Untold History of English.

Last week the media dutifully reported the typically depressing news about black boys' scholarly chops from the NAEP (National Assessment of Educational Progress) survey. More than three times as many white fourth-grade boys as black ones read proficiently or better. By eighth grade, white boys are doing almost four times as well as black ones in math.

Numbers, though, cannot always speak to us as clearly as words: The most depressing result in the survey is that inner-city black boys generally do worse in the aggregate than white boys with learning disabilities.

There has been the usual hand-wringing about what this news means for the prospects of a generation, and so on. It's a "national calamity," according to the Rev. Al Sharpton. But overall, there has been only so much hand-wringing, and it's partly because these NAEP reports so rarely tell us much new. After decades of discussing a black-white gap in reading and math scores that has not narrowed meaningfully since the '80s, one should be pardoned for wondering if there is much more left to say.

We are to think that black kids will continue to lag behind Scarsdale Sarah and Port Washington Peter until they get to go with them to well-appointed, lushly funded suburban schools. But especially because that doesn't exactly seem to be on the horizon, it's easy to think that these NAEP scores are just the way it's going to have to be indefinitely, like global warming. Or you might chalk it up to the fact that, as articles on the survey have noted, black kids are less likely to have health care, or two parents.

The tragedy is that the discussion about black kids in school -- boys as well as girls -- takes place as if there were some great mystery about how to teach children from disadvantaged homes how to read. An entire plangent and circular conversation drifts eternally over a problem that, at least in the case of reading, was solved way back during the Nixon administration.

Back then, in the early '70s, Siegfried Engelmann led a government-sponsored investigation called Project Follow Through. It compared nine teaching methods and tracked their results among 75,000 children from kindergarten through third grade. It found that the Direct Instruction (DI) method of teaching reading -- based on sounding out words rather than learning them whole (phonics), and on a tightly scripted format emphasizing repetition and student participation -- was vastly more effective than any of the others. And for poor kids. Including black ones.

A half-day preschool program in Illinois that Engelmann and his associates founded showed that DI can teach even 4-year-olds to understand sounds, syllables and rhyming. The students entered kindergarten reading at a second-grade level, with their mean IQ jumping 25 points. No fewer than nine other sites nationwide yielded results of that caliber. In other words, Project Follow Through nailed it -- period. And yet most of us are more likely to know the name of Sammy Davis Jr.'s second wife than to have heard of this miraculous instantiation of sheer common sense.

Decade after decade, DI has continued to kick serious butt all across this great land. Houston, Baltimore, Milwaukee -- you name it; I am unaware of anywhere it hasn't worked, and it's hard to even choose one example as a demonstration. In 2001, students in the mostly black Richmond district in Virginia were scoring abysmally in reading. With a DI-style program, just four years later, three-quarters of black students passed the third-grade reading test. Meanwhile, over in wealthy Fairfax County, where DI was scorned, the minority of black students taking that test -- despite ample funding -- were passing it at the rate of merely 59 percent.

Even sadder is that conventional teacher-training programs at education schools keep alive the canard that teaching poor kids to read is an elusive, complex affair requiring a peculiarly intense form of superhuman dedication and an ineffable brand of personal connection with young people. The poor child, the popular wisdom tells us, needs freedom to move about the classroom, or Ebonics, or less soda, or more leafy green vegetables, or any number of things other than being taught how to sound out words and read. Distracted by the hardships in their home lives, surely they cannot be reached by just having the facts laid out for them the way lawyers' kids can be reached.

But what seems plausible to ed schools is not, as DI's endless successes have shown beyond a shadow of a doubt. What this means is that if we want to make a difference for black boys, such that NAEP surveys will look different in 10 years, we must take the reins ourselves. In a better America, schools that do not use DI to teach kids from poor households should be seen as vaguely criminal. People should point them out as they drive by them, like crack houses.

So Sharpton suggests that "pre-K programs should be expanded." Indeed -- and they should be required to start kids out with DI methods. "Teachers should be truly held accountable," Sharpton continues. Yes -- and teaching with DI should become the measure of effective teaching. Note also: DI wouldn't require us to wait until that great day when all teachers are stellar. DI is designed, with its set scripting, to be teacher-proof.

"We dare not fail," Sharpton announces.

Right -- but fail we will, if we do not start demanding that our local school boards use methods of teaching reading that actually work.