Accessibility links
Unfamiliar Accents Turn Off Humans And Songbirds Our brains seem to pay better attention to the voice of someone with a familiar accent, according to neuroscientists. It's not clear why the brain behaves this way, but songbirds might be able to offer a few clues.

New research suggests that our brains have a built-in bias against people whose accents don't sound like our own. 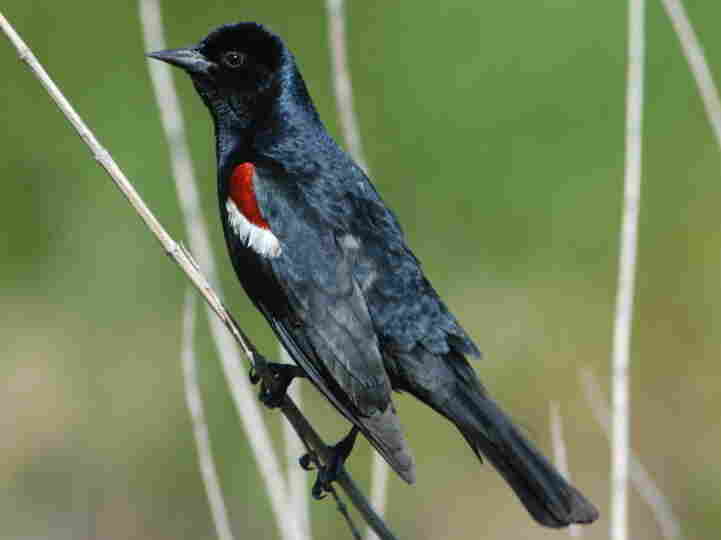 Songbirds, like this male tricolored blackbird, develop regional accents in the same way humans do, researchers found. And, like humans, songbirds seem to respond better to accents they already know. Dave Menke/Courtesy of the U.S. Fish and Wildlife Service hide caption

That's the conclusion of Scottish researchers who presented their work at the Society for Neuroscience meeting in San Diego.

The team, from the University of Glasgow and the University of Edinburgh, used a functional MRI scanner to study the brains of 20 native Scots as they listened to native English speakers with Scottish, American and southern English accents. They focused on the brain's temporal voice area, which seems to specialize in processing characteristics of particular voices.

Earlier research had found that people process words spoken in their own accent more quickly and with less effort. So the team expected the brain scans would show a decrease in brain activity in this area.

Instead, the scans showed a "huge increase," says Patricia Bestelmeyer of the University of Glasgow.

That suggests that people's brains are paying more attention to the voice of someone from their own group than from a different group.

From an evolutionary perspective, it makes evolutionary sense that our brains are wired to detect accents, Bestelmeyer says. "Accents convey important information about the speaker's social background," she says, adding that accents offer a quick way to determine whether someone is part of our own group or an outsider.

It's still not clear precisely how the human brain does all this, Bestelmeyer says. But, oddly enough, people who study birds think they may have some clues. That's because songbirds, like people, learn to vocalize early in life and develop regional accents. So research on bird brains could help explain what's going on in the human brain, says Jon Prather from the University of Wyoming.

Prather has studied the brains of swamp sparrows from Pennsylvania and New York, whose calls have subtle differences that are a lot like accents.

"We studied a region of the bird brain that is involved in not only how they sing their songs but how they perceive differences in their songs," he says. And that research found individual brain cells that would respond to one accent -- but not another.

So Prather and researchers from Duke University compared songbirds from Pennsylvania with songbirds from New York. They found specific brain cells in the Pennsylvania birds that responded to songs sung in their own accent, but they would stop firing when exposed to a New York accent.

"It would effectively shut down. It would not respond at all," he says.

All of which suggests that that songbirds from Pennsylvania and New York recognize each other's speech differences much the way human residents do, Prather says. And in nature, he adds, members of one group tend to be wary of members of another.

"We think that's actually the reason that Eagles and Giants fans don't get along," he says.