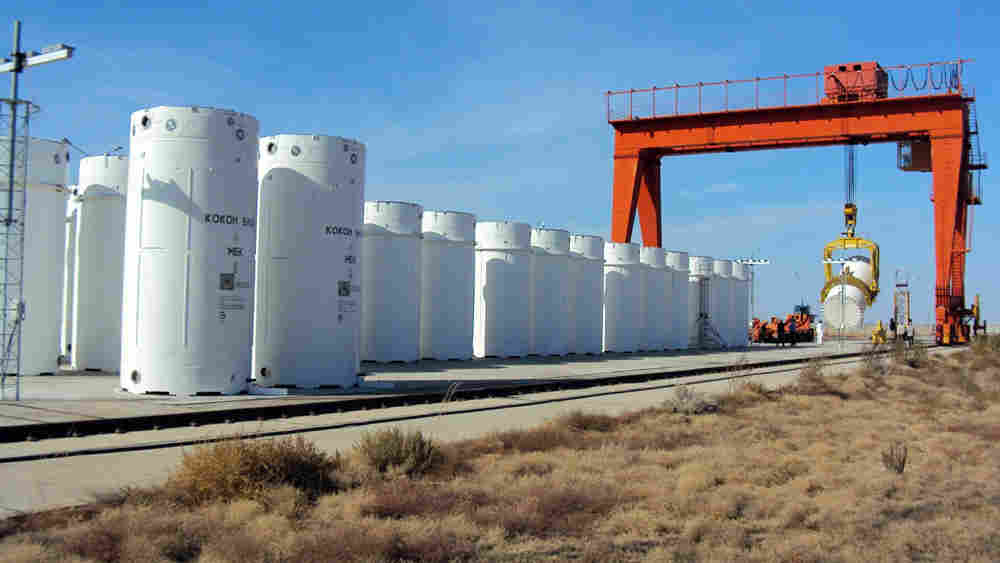 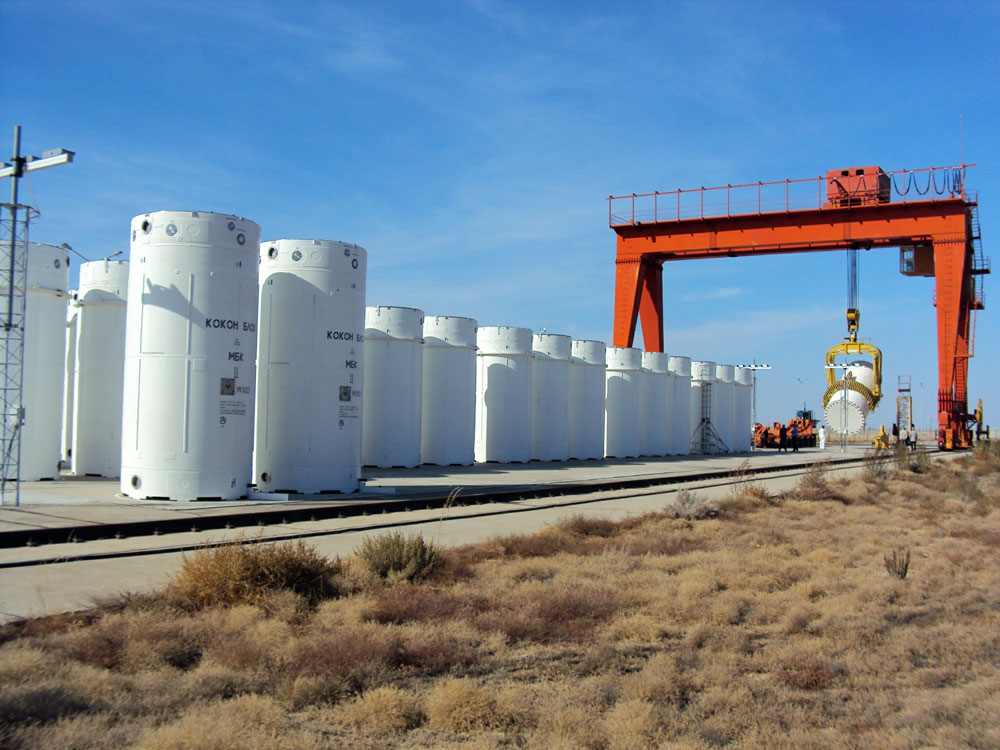 A crane specially manufactured in China moves casks containing high-quality plutonium and highly enriched uranium at the nuclear power plant in Aktau, Kazakhstan. The U.S. and Kazakhstan have completed a project moving 100 tons of radioactive material -- enough for nearly 800 nuclear weapons -- across the country to a safe storage site.

The United States and the former Soviet republic of Kazakhstan have completed moving some 100 tons of highly radioactive material from a Caspian Sea port in the country's west to a safe storage site in northeastern Kazakhstan.

Years in the planning, the project took a year to move the material by rail and road 1,500 miles across the country. The last of the shipments was delivered Monday.

In 1973, a nuclear reactor began operations in the small Soviet city of Shevchenko on the Caspian Sea. This nuclear plant produced steam heat and electricity for the people of the region, as well as fresh water for them to drink.

It also produced another very important product, notes Richard Hoagland, the U.S. ambassador to Kazakhstan. "It also provided the plutonium for the Soviet Union's nuclear weapons that potentially could have been used against the West," Hoagland says.

Kazakhstan Turns To U.S. For Help

It's called ivory grade plutonium and it is "quite unusual," says Leonard Spector, a former Energy Department official who first became of aware of this plant in the 1990s. Spector is now with the Washington office of the James Martin Center for Nonproliferation Studies.

"In a typical nuclear power plant, the plutonium is usable for nuclear weapons, but it's of a low quality, and would not be what you would seek," he explains. "But this particular material at this reactor did have these attributes that made it really ideal for that purpose. And the reactor was sitting across the Caspian Sea from Iran."

When the Soviet Union broke up in 1991, the city changed its name to Aktau and found itself part of a newly independent state, Kazakhstan. The leaders of Kazakhstan wanted to do something about the reactor, and they sought the help of the United States. 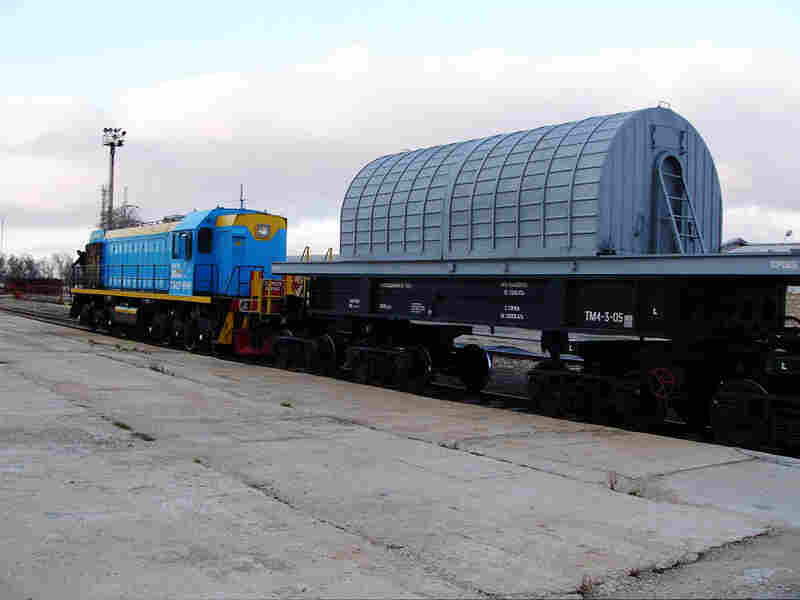 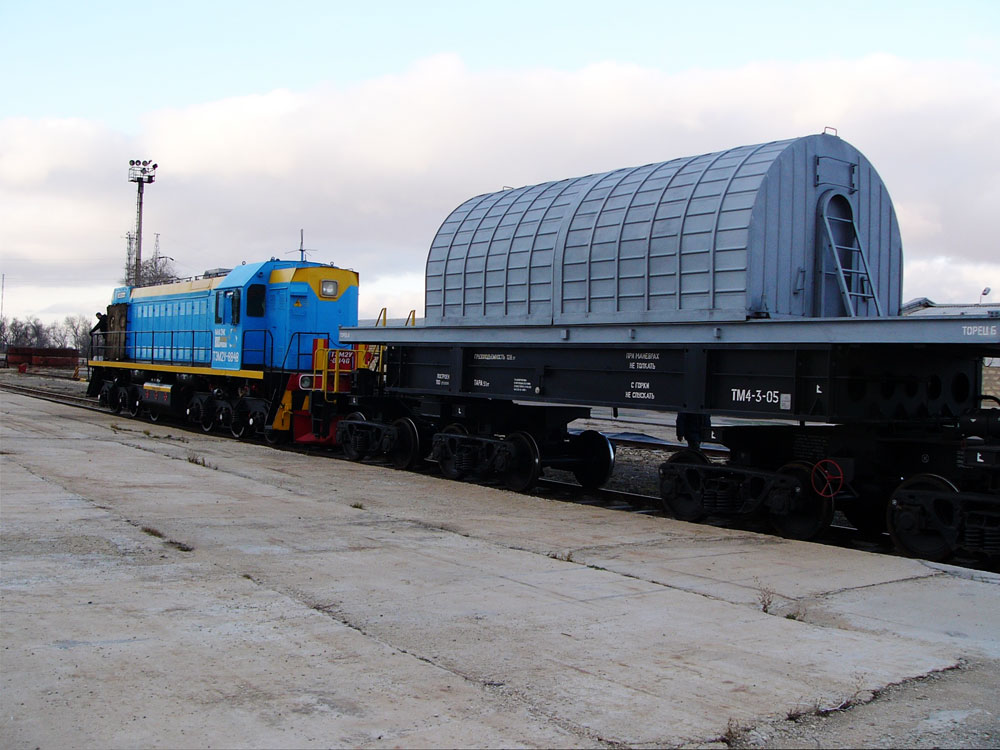 The project moved the Soviet-era nuclear materials 1,500 miles across Kazakhstan by rail and road.

Experts from the U.S. visited the Aktau nuclear power plant in the mid-1990s, and they first made some calculations on the back of an envelope to estimate its plutonium production capacity.

'We Understood The Magnitude Of The Issue'

It was a big number, says Eric Howden, who has been the U.S. project manager for securing the materials at the Aktau reactor since 2004.

"I'm not sure if I would say it was alarm, but certainly we understood the magnitude of the issue. And it was the largest stockpile of weapons-grade material outside of a weapons state that we were aware of," Howden says.

The Aktau nuclear plant now has sophisticated security measures: Computerized gates and mantraps clank and beep. During the Soviet days, there were no such measures.

Authorities shut down the complex's nuclear component in 1999, but the plant still produces electricity and steam heat for the city by burning natural gas.

Three tons of plutonium and 10 tons of highly enriched uranium were left on the site, the equivalent of 775 nuclear weapons.

For the past decade, Gennadi Pugachev has been the key Kazakh specialist planning and implementing the movement of the nuclear materials from Aktau to a classified secure storage site in northeast Kazakhstan.

The reactor was built aboveground in order to give railroad cars access to the plant to bring in new nuclear fuel and cart out the plutonium and other nuclear materials the plant produced.

The joint Kazakh-American operation to remove the dangerous material involved those railroad tracks to bring specially manufactured casks to a newly built loading pad outside the plant.

The project has been huge. It took several years to design just the casks. Built in Ukraine and Russia, each cask weighs 100 tons when filled; they are designed to last 50 years without leaking. A special crane built in China was installed to lift them onto the rail cars.

"All equipment is load-tested at least at 120 percent of the actual live load to ensure that there are no accidents during live operations," he says, adding that there were "no safety incidents during this entire project."

Over the past year, 60 of the casks were transported more than 1,500 miles across Kazakhstan to a specially constructed security facility. The last delivery occurred on Monday, Pugachev says.

"You could say honestly, [there was] some feeling of relief of all the successful work," he says. "That it was done, completed."

Wednesday: Getting the casks across Kazakhstan -- and the hundreds of people that task involved.