Accessibility links
National Review: No Compromises For Schakowsky Rep. Jan Schakowsky (D-IL), a member of the commission appointed by President Obama to come up with a plan for reducing the deficit, has come out with her own plan in reaction to the one written by the commission's co-chairs. Stephen Spruiell of the National Review says Schakowsky's plan is devoid of any compromises with conservatives.

National Review: No Compromises For Schakowsky

National Review: No Compromises For Schakowsky 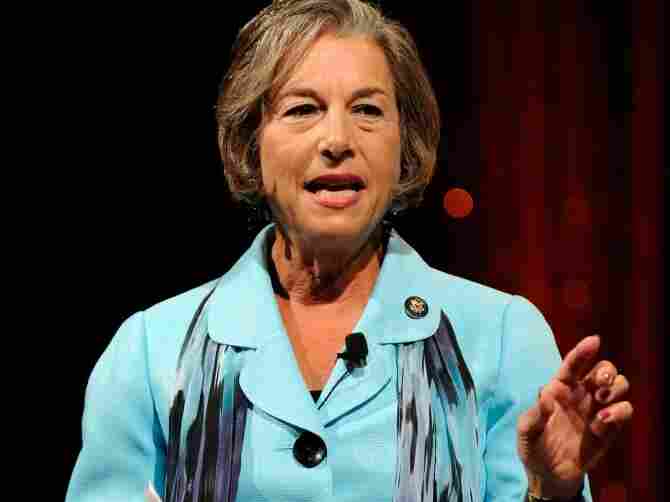 Rep. Jan Schakowsky (D-IL) speaks at a convention in Las Vegas, Nevada. Schakowsky has come out with her own deficit reduction plan in opposition to the one proposed by deficit commission co-chairs Erskine Bowles and Alan Simpson. Ethan Miller/Getty Images hide caption

I think it's fair to say that the Schakowsky plan contains zero compromises, where compromise is defined as support for an idea that Schakowsky was not already inclined to support. Seriously, this plan is all tax hikes on businesses and defense cuts and a public option for health care. Was Schakowsky a big fan of farm subsidies? If so, maybe that part of the plan represents a compromise. But it would be a compromise that one could fairly view as a deal between Schakowsky and other liberals, most of whom hate farm subsidies because they disproportionately benefit large farms and have big-time negative environmental effects. There is absolutely no outreach to conservatives here.

I think it's also fair to say that, viewed through the prism of mainstream economic thinking on taxation, the Schakowsky tax plan completely subverts the guiding principles it sets out on page one. The first of these is, "Achieve deficit reduction and stabilize debt without harming lower-income and middle-class families." Someone needs to alert Schakowsky to the relatively non-controversial idea in economics that corporations act as tax collectors, not taxpayers, and that most of the people from whom they collect -- their employees, their customers, and many of their shareholders -- come from the lower and middle classes.

Not all of Schakowsky's tax proposals are bad: Eliminating the deduction for corporate-debt interest payments would remove a pretty harmful market distortion. But she does not couple fewer loopholes with lower rates, meaning that after the dust settled, American businesses would be laboring under one of the highest effective tax rates in the world. If you want to "ship American jobs overseas" (to use the standard Democratic attack line), I can think of few better ways. That's not going to achieve Schakowsky Guiding Principle No. 2: "Create jobs and restore economic prosperity."

It is also standard thinking in economics that taxing something results in less of it, so that taxing capital results in a smaller capital stock; and a smaller capital stock translates, ceteris paribus, into lower productivity and lower incomes. Schakowsky's plan, which calls for big increases in estate, capital-gains, and dividends taxes, is not going to "keep America strong and competitive" (per Guiding Principle No. 3) or "reduce unprecedented income disparities" (No. 4). It is going to hamstring our economy and reduce incomes for everyone, not just those at the very top.

Finally, Schakowsky's plan to solve the Social Security shortfall without touching benefits (except where it increases them) contradicts Guiding Principle No. 5, which is, "Solve problems -- don't just shift costs and burdens to families and businesses." Eliminating the Social Security payroll-tax cap on the employer side, as the Schakowsky plan would do, would most definitely shift costs and burdens to businesses. But it would burden families, too. We can reliably expect businesses to pass on the costs of the tax increase where they can in order to remain competitive, resulting in lower wages and fewer jobs. And on the employee side, Schakowsky would raise the cap to 90 percent of earnings. Such a massive marginal tax increase is guaranteed to have incentive effects that will create a drag on growth.

As if to put an exclamation point on this declaration of "More dependence," the Schakowsky plan ends by calling for $200 billion in additional short-term Keynesian stimulus spending. Many conservatives greeted the Bowles-Simpson plan with respectful optimism because it was serious and attempted genuine compromise between two radically different visions of government. They owe the Schakowsky plan no such deference.