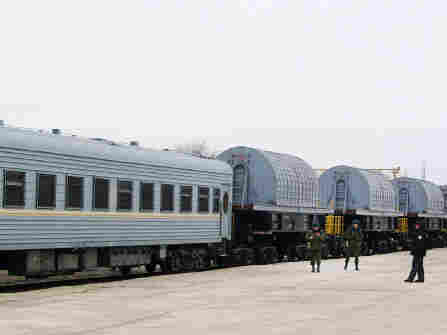 Security was tight during a yearlong project to transport 100 tons of radioactive materials from a former nuclear reactor in western Kazakhstan on the Caspian Sea to an undisclosed secure storage site 1,500 miles across the country in northeast Kazakhstan. U.S. National Nuclear Security Administration hide caption

Over the past year, the U.S. and Kazakhstan have secretly moved tons of dangerous nuclear material across the country to a safe storage facility.

The experience in Kazakhstan, a former Soviet republic, could well have a significant impact on the approach to securing dangerous nuclear materials elsewhere.

Kazakhstan and the U.S. transferred more than 100 tons of highly radioactive materials, including enough plutonium and highly enriched uranium to make some 775 nuclear weapons.

The last of the material, moved from Aktau on the Caspian Sea, arrived on Monday. It's all contained in 60 huge white conical casks that sit in four neat lines on a concrete pad.

The secret storage site is a military area in a remote part of northeast Kazakhstan; the nearest small town is 40 miles away. NPR agreed not to reveal the precise location for security reasons.

Eric Howden is the manager of the American component of the project, under the auspices of the National Nuclear Security Administration in the Department of Energy.

It was a large and lengthy undertaking, involving movement of the material by both rail and road. Security was key, given the danger involved with handling and moving plutonium and highly enriched uranium.

"During the rail shipments there were security forces that were placed the entire route," Howden says.

The casks were moved first over more than 1,500 miles of railroad track across Kazakhstan from a shuttered nuclear power plant in Aktau in western Kazakhstan. Hundreds of troops were involved, stationed along the rail route and on the trains themselves, Howden says.

"There [were] two security cars that accompanied each shipment, front and back. And there were a certain number of guards that were believed could repel any attack that were right onboard that train," he says.

Starting with the computer-controlled gates, there are numerous layers of security at the long-term storage site that, according to Howden, should keep the materials safe for the next 50 years.

The list of security measures includes instrumentation and equipment security, the guard and response force, as well as a major military base beyond that.

"Then there are the 100-ton casks themselves that an adversary would need to breach in order to reach the material. Upon breaching the casks there are even more security features beyond that. And finally there's simply the flat terrain here. There's really no place to go with the military presence that is in this region," Howden says.

Isolation Both A Plus And Minus

The isolation of the area has long been a factor in the nuclear complex of the Soviet Union. Soviet scientists chose it for the extensive testing of nuclear weapons that they carried out, both aboveground in the 1950s and '60s, and underground after that. A local museum exhibit asserts that there were 456 nuclear tests at the Soviet test site at Semipalatinsk, in what is now northeast Kazakhstan.

The site's isolation did have its drawbacks. Construction of the storage facility and the road to get there was all the more difficult, says Brent Harris of the Idaho National Laboratory, lead engineer of the U.S. team.

"The remoteness of the site made it more complex to get the materials. We had to set up our own batch plant to mix the concrete and bring in the cement and the gravel, etc. To repair the road, the asphalt plant is probably about a hundred kilometers away," Harris says.

Lessons For The Future?

Made of stainless steel and concrete, the storage casks used had to be resistant to the corrosive effects of highly radioactive material. They had to be impregnable to violent attack, and they needed to last for 50 years.

The design is essentially Russian.

Randy Snipes from the Oak Ridge National Laboratory in Tennessee says the casks may turn out to be valuable in other similar situations.

"We learned from the experience of their cask, and they will take the further prototype and experiences from this activity on to their future activities within Russia," he says.

That is important because Russia still has a great deal of nuclear material that needs better protection and storage.