Accessibility links
Cutting Off Safe Havens Key To Afghan Fight U.S. troops have been conducting major combat operations in parts of Afghanistan's southeastern Kandahar province, and have managed to disrupt insurgent networks. But it's hard to know how many insurgents escape to Pakistan, lay low for a while and come back. 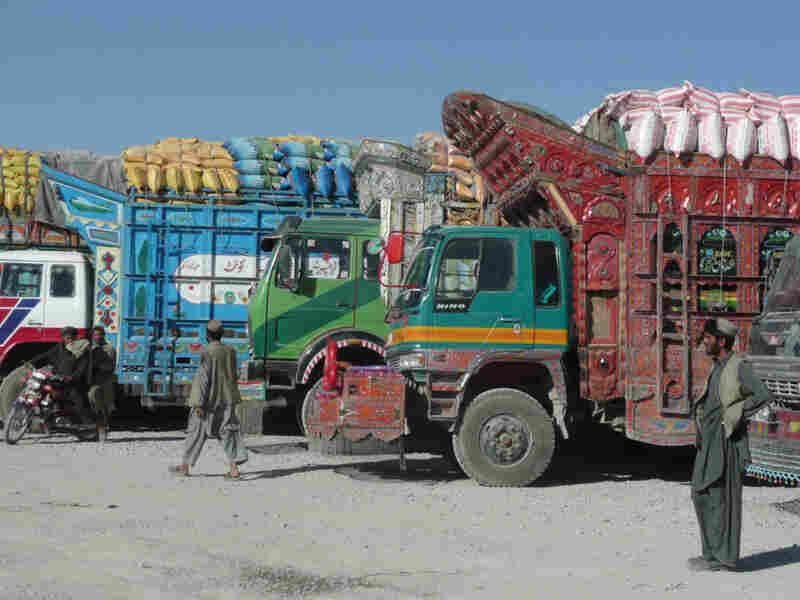 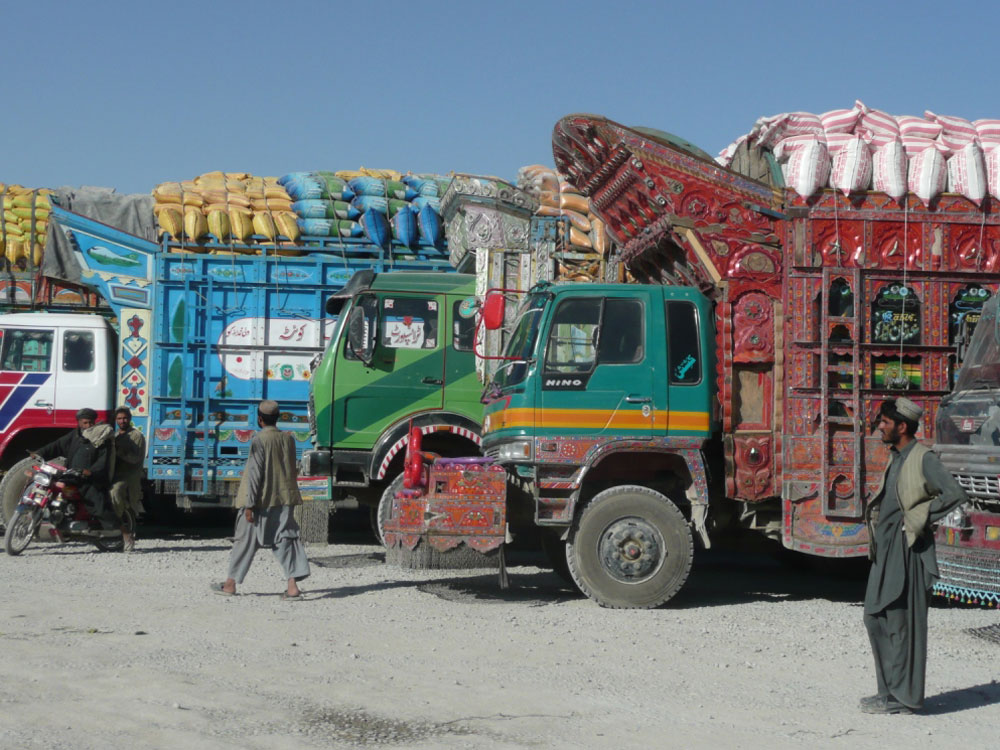 Trucks wait to cross the border between Afghanistan and Pakistan near Spin Boldak in Afghanistan's Kandahar province. The U.S. military is trying to prevent Taliban militants from fleeing to Pakistan to regroup.

The border along the desert in Afghanistan's southeastern Kandahar province is marked by a monument that looks like a more colorful version of the Arc De Triomphe. It's called Friendship Gate.

And considering the long-standing tensions between Afghanistan and Pakistan, the name seems more like wishful thinking than anything else.

U.S. troops have been conducting major combat operations in the north and central parts of the province, managing to disrupt insurgent networks. But it's hard to know how many insurgents escape to Pakistan, lay low for a while and come back.

Standing on a rooftop near the border crossing, U.S. Army Col. Jim Edwards points toward the gate. "Pakistan and Afghanistan don't agree exactly where this border is," he says.

Edwards and his unit, Task Force Lightning, are trying to control what they can of that revolving door.

Biometrics In The Fight

They use X-ray technology to scan each of the roughly 800 trucks that can pass here in a day. But Edwards says there aren't enough resources to screen every person who drives or walks across the border.

Instead, each day, Afghan police select a couple of hundred people and take them to the nearby immigration center. It is a concrete building where men are lined up to be processed.

U.S. troops wearing bulletproof vests collect biometric data, which involves taking an eye scan or a fingerprint and asking basic questions about a man's family, his home and his job.

Lt. Scott Brown oversees the operation, which the soldiers call "biometrics enrollment." He says that once the information is collected, it's entered into a database.

"Once a match is made with the database on the watch list, it will pop up and tell us what level they are, which is a way to categorize how dangerous they are as a threat, and what action we should take," he says.

Have they identified insurgents or others who shouldn't be crossing the border?

"We've found some people on the watch list, and people who were later identified to be Taliban after we enrolled them," Brown says. "Their prints were matched to latent prints on [improvised explosive devices, or IEDs]. So it's really more of a deterrent factor than trying to catch every Taliban who tries to cross the border." 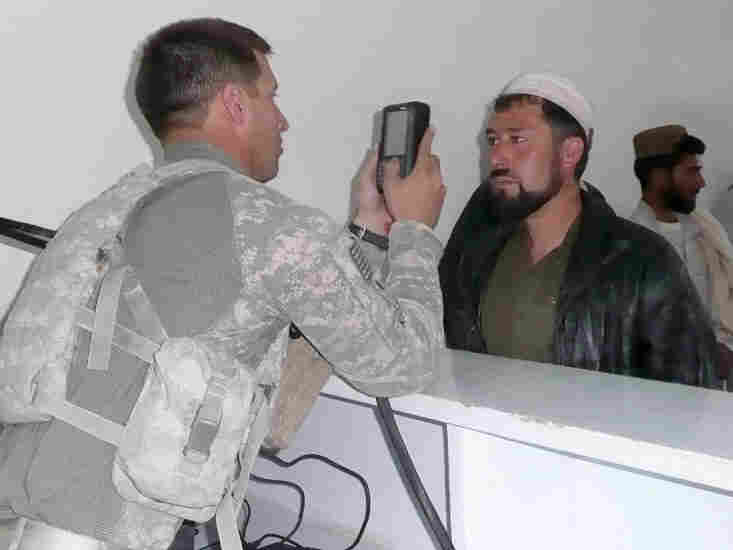 A U.S. soldier at a border immigration center takes an eye scan of an Afghan man. That information is entered into a database and cross-checked with an insurgent watch list. Rachel Martin/NPR hide caption 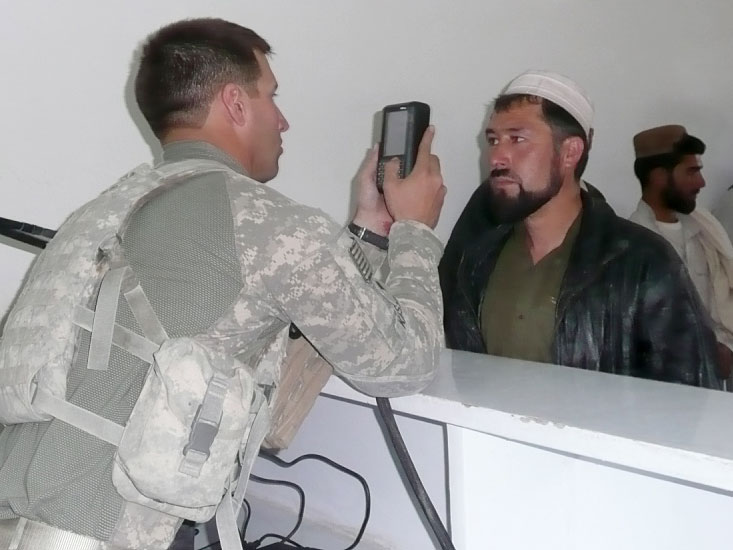 A U.S. soldier at a border immigration center takes an eye scan of an Afghan man. That information is entered into a database and cross-checked with an insurgent watch list.

There have been some successes. In the past couple of months, U.S. and Afghan forces have seized more than 100 pounds of explosives and about 6,500 pounds of ammonium nitrate -- a key ingredient in IEDs.

Col. Jim Edwards says "the more success we have here, the more we drive people out away from the legal border crossings."

The official crossing down near the town of Spin Boldak is only one of two along the Afghan-Pakistan border -- the other is to the north at Torkham Gate.

"This is only one small point where you look on the border, but the whole area, the whole thing is 1,500 miles," he says. "That means people are crossing without any checkpoints and without anything. They are just crossing back and forth freely."

The Afghan police commander says the insurgents in the area are members of networks that include Arabs, Chechens, Pakistanis and Afghans. And he says they usually cross at night when security at the border is thinner.

Edwards says that when U.S. and Afghan troops start ramping up data collection at the border, potential insurgents crossing from Pakistan to Afghanistan sometimes get advanced warning.

For U.S. Troops, Peril On The Afghan-Pakistan Border

"The biometrics enrollments, when those are running hot and heavy, sometimes you can even hear them announcing on the mosques across the way, 'Hey the biometrics are going on -- be careful right now,' " he says.

U.S. officials acknowledge that any long-term solution in Afghanistan has to address the safe haven problem in Pakistan. As long as the border stays porous, the revolving door stays open.

U.S. and Afghan officials say operations in the south have broken up some insurgent networks, but now smaller groups have returned and are terrorizing villages with IEDs.

Sense Of Security Among Afghans

Part of the NATO mission here is to teach Afghan security forces how to combat that threat.

On a recent day, Air Force Tactical Sgt. Steven Nidzgorski is giving a class on IEDs to Afghan national police officers. They ask questions like how many different kinds of IEDs are there and how can they identify them.

After the class, NATO officers hand-select one of the students to be interviewed about the security situation where he lives. He says things are getting better. But another student who turns out to be a captain in the national police interrupts and says the exact opposite.

"The situation is getting worse day by day," Gulam Sarwar says. "Because insurgent activities are getting increased daily, and we see lots of people who are doing sabotage activities in Kandahar province."

He is a member of the Afghan national police, or ANP, but he does not feel safe.

"We're afraid that lots of ANP officers have been assassinated by the insurgents," he says through an interpreter. "And while I'm going home, I'm covering myself, because due to security problem, that's what I'm doing."

Changing that sense of fear and making Afghans feel more secure is a key step if the Afghan government is to take control of this war. NATO officials say they want to start that transition early next year.