Accessibility links
The Root: Is There A Place For Black Actors On TV? Before it had officially premiered, Undercovers, a show produced by J.J. Abrams and featuring two black leading characters, was hailed as the new wave of diversity in television programming. Marcus Vanderberg of The Root examines why the show failed, and argues that while African-Americans would like to see characters who look like them on TV, those shows must be written and produced well. 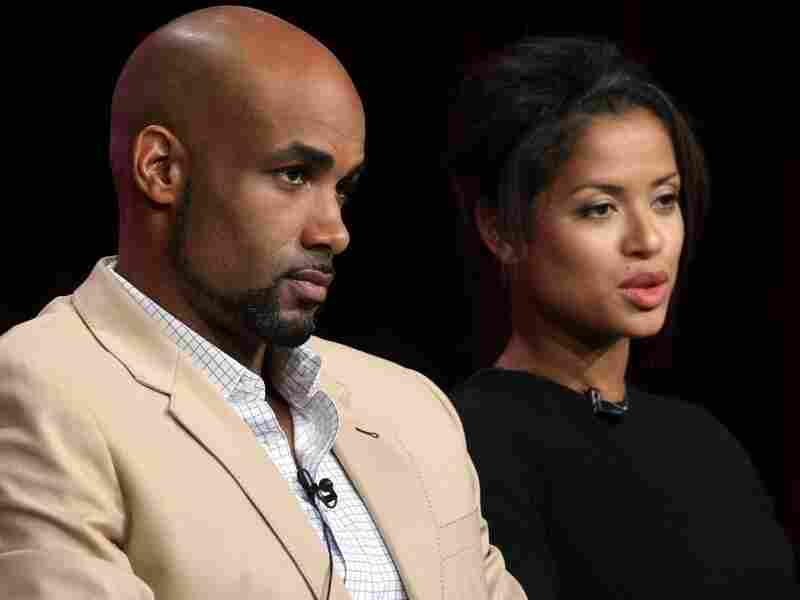 Marcus Vanderberg is a contributor to The Root.

It never stood a chance.

J.J. Abrams of Lost fame co-created Undercovers, revolving around two CIA agents, Samantha and Steven, who moonlighted as caterers. When they weren't whipping up dishes in the kitchen, Samantha's sister, Lizzy, ran the catering business, totally oblivious to what was really going on.

Sounds like a recipe for disaster, right? When you throw in the fact that the show was in a bad time slot, featured subpar writing and two lead actors who were (gasp!) black, it's not surprising that NBC pulled the plug after less than two months.

Starring Boris Kodjoe, known more for his good looks than his acting chops, and British newcomer Gugu Mbatha-Raw, Undercovers was expected to be a step in the right direction toward greater diversity on network television. Instead, it's leaving many to wonder what the future holds for black actors landing lead roles on the "Big Four" networks.

"Everybody wants that next great show that features a person of color in the lead, that is successful and breaks down a lot of these fears about getting a mostly white audience to watch a network television show [starring black actors]," Eric Deggans, a television and media critic for the St. Petersburg Times, told The Root. "That's the reason critics like me are always hopeful when a show comes along that really showcases an actor or actors of color."

But Undercovers had its share of handicaps to overcome.

"I thought NBC scheduled it very poorly," Deggans said. "They had it start off Wednesday nights when CBS was moving a really popular show, Survivor, from Thursdays to Wednesdays. One of the things you try not to do in television is start a night with a show that people don't know."

Another challenge? Black viewers, who many might have guessed would rally behind the show, never embraced it. Undercovers only cracked the top 10 on Target Market News' list of the top 25 broadcast shows in black households twice, and that was during its first two weeks on air. On Nov. 4, the night before the show was officially canceled, Undercovers finished 16th in black households behind Hawaii Five-0 and The Mentalist, both of which lack black lead characters.

For the viewers who remained loyal to Undercovers on a weekly basis, they were forced to sit through 60 minutes of what some critics have described as bad dialogue and poor writing.

"Even though [acclaimed writer and producer] J.J. Abrams co-created the show, it's obvious he wasn't too heavily involved in the writing because the writing was pretty mediocre," Deggans said. "One of the things you expect from a J.J. Abrams show is the lines will sparkle. … They never really managed that."

Black actors in lead roles on network television will be few and far between when the last episode of Undercovers airs on Dec. 1. Blair Underwood plays President Elias Martinez in the confusing NBC science fiction thriller The Event, but the show has such poor ratings that NBC plans to relaunch it in February in hopes of attracting more viewers.

Not all is lost for the remainder of the 2010-2011 television season, though. Oscar-winner Forest Whitaker will star in Criminal Minds: Suspect Behavior, a spin-off of the wildly popular CBS police drama. The Chicago Code, formerly known as Ride-Along, will feature Delroy Lindo and is set to premiere on Fox in February. And Damon Wayans Jr. attempts to keep the Wayans legacy alive in Happy Endings, an ABC comedy on post-romantic-relationship friendship. Whether or not these midseason replacements meet the same fate as Undercovers remains to be seen.

The fact that black leads are such a gamble on network TV these days highlights the noticeable shift in programming during the last 25 years. Following the success of NBC's The Cosby Show, Fox was responsible for an influx of black programming during the 1980s and 1990s with shows such as In Living Color, Martin and Living Single.

"[Fox] found a niche that wasn't being served," said Dr. Kristal Brent Zook, author of Color by Fox: The Fox Network and the Revolution in Black Television and associate professor at Hofstra University. "They called it the 'urban market,' which actually included Latinos and young people in general. They saw that this was a market that they could make money off and create a fourth network."

The UPN and the WB, which is now the CW Network, copied the Fox blueprint (think Girlfriends) before they all abandoned most of their black programming in order to appeal to a more mainstream audience. And now it seems as if all the inroads of the past few decades have been for nothing. But Mekeisha Madden Toby, a Los Angeles-based television critic for the Detroit News, said there is hope.

Undercovers' ratings among black viewers might just prove her point. But that raises the $64,000 question: Is the black community concerned about diversity in network television?

"I don't think it's a concern," Madden Toby said. "African Americans are no different than anyone else, and we like to see ourselves on television. ... But I don't think people are losing sleep over it."