Accessibility links
In Booming India, All That Glitters Is Gold In Indian culture, gold has a traditional worth that far outweighs its intrinsic value. As India's economy surges and more people share the wealth, the country's thirst for gold is rippling through the world market. 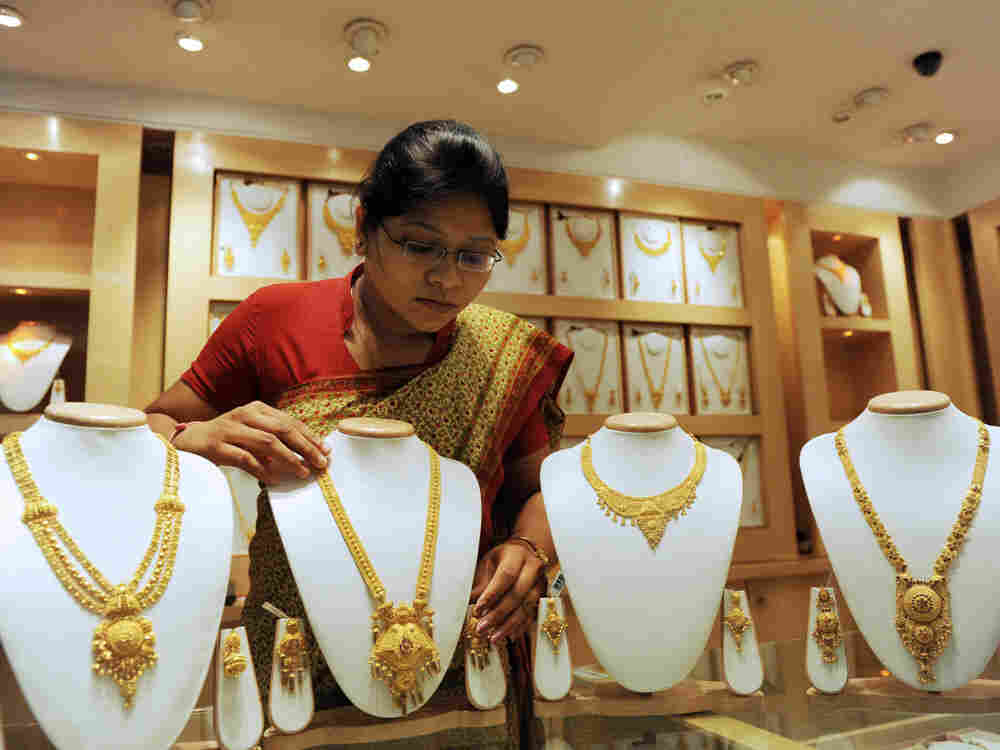 A saleswoman arranges 22-carat gold necklaces at Forever Precious Jewellery and Diamonds Ltd. in Ahmedabad, India. The country is the world's largest consumer of gold, accounting for some 20 percent of the global demand. Sam Panthaky/AFP/Getty Images hide caption 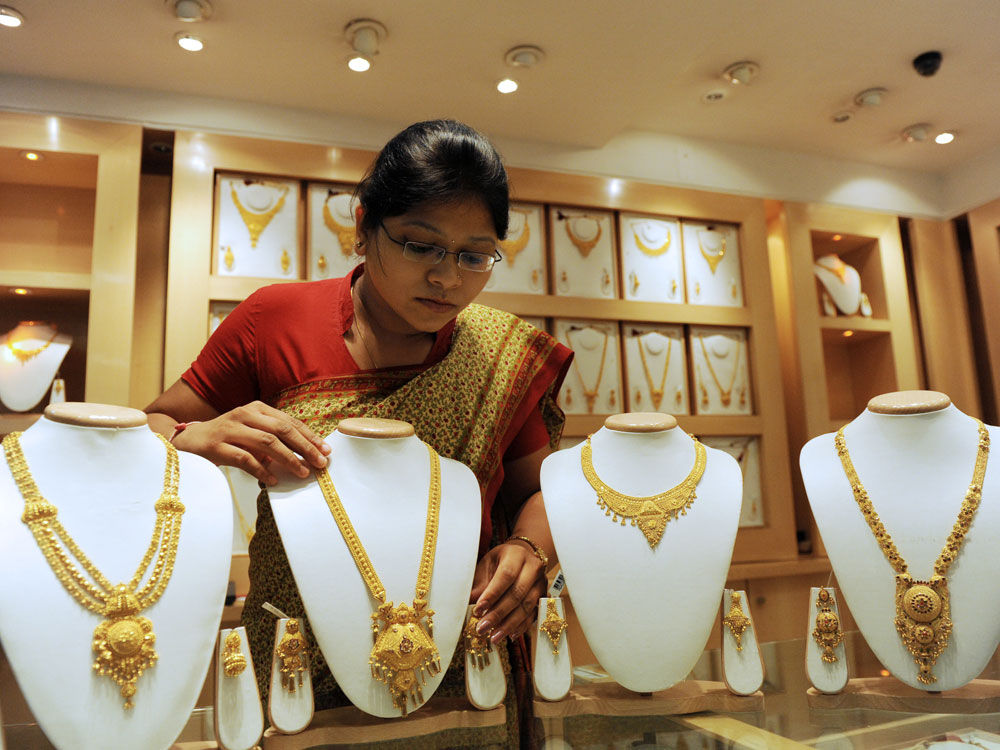 A saleswoman arranges 22-carat gold necklaces at Forever Precious Jewellery and Diamonds Ltd. in Ahmedabad, India. The country is the world's largest consumer of gold, accounting for some 20 percent of the global demand.

In much of the world, gold is regarded as an investment for times of great risk. In India, though, demand for the yellow metal remains strong through good times and bad.

That's because, in Indian culture, gold has a traditional worth that far outweighs its intrinsic value. As India's economy surges and more people share the wealth, the country's thirst for gold is rippling through the world market.

There's no better place to see what gold means to India than in the tony jewelry stores of New Delhi. At Tribhovandas Bhimji Zaveri Delhi, P.N. Sharma shows visitors through three floors of opulence that make "Breakfast at Tiffany's" look like a snack.

"Exclusive necklaces are over there, and bangles," Sharma says, waving past displays that would stagger the imagination of a maharaja. Salesladies in gold saris extend velvet trays with gem-encrusted gold necklaces as families cluster around the counters.

Almost all of this gold is designed to be given at weddings. That's because gifts of gold are presented to the bride throughout the process, from the time she becomes engaged to her wedding night.

It's an age-old way of conferring protection on the marriage and on the family that will result.

Nandkishore Zaveri, a director in the company, says wedding gold is a kind of insurance policy, "given to the daughter at the time of marriage, so that in the case of any difficulty in the family after the marriage, this can be encashed and the problem can be solved.

"That's what gold is all about in India."

Both the bride's and the groom's families give gold to the bride, so many parents begin buying jewelry, or at least saving for it, when their children are still quite young.

"I want to buy gold for my son's marriage," says Ashok Kumar Gulati, fastening a heavy gold chain around his wife's neck. The necklace that Mrs. Gulati is trying on will be a present for her daughter-in-law in the days that lead up to the ceremony.

The jewelry is priced by weight, according to the market price on any given day, and a necklace like the one she is trying on can run to thousands of dollars.

But Gulati says even at these high prices, he's not worried that the family will ever lose money on its gold purchases, especially when it's compared with any other investment.

"[Compared with] the appreciation of any other investment, gold will be matching up," he says. "So gold is never a loss."

That's why India is the world's largest consumer of gold, accounting for some 20 percent of the world's demand.

Surya Bhatia, an economist at the New Delhi-based investment firm Asset Managers, says demand will continue to grow because India's economic boom is bringing more people into the middle class, and families are increasing their purchasing power.

"From a single-income family to a double-income family, the levels of income have gone up," he says. "The education has also led to this boom of the incomes."

But there are many reasons why Indian families aren't likely to give up their gold jewelry. The Hindi word for wedding jewelry is "stridhan," which means "women's wealth."

"It is considered as an asset for a woman, which is her property [and] will remain with her throughout her life," says Pavi Gupta, who visited the store with her fiance, Manpreet Singh Duggal, to look over some gold pieces that their families may buy.

She says gold is a form of empowerment for a woman because it gives her the means to save her family if the need arises.

In a hard-charging economy like India's, where risks are high and there's not much of a social safety net, that can mean a lot.