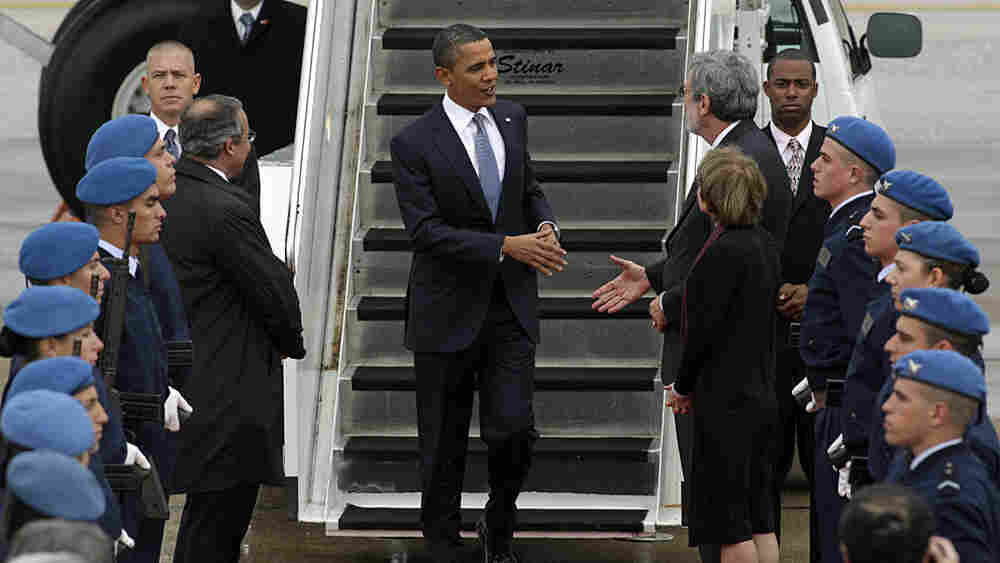 President Obama is welcomed by officials upon his arrival at Lisbon airport Friday for a NATO summit of heads of states and government. Andre Kosters/AFP/Getty Images hide caption

NATO leaders have agreed for the first time to establish a joint missile defense system in Europe, President Obama said Friday in Lisbon, where members also backed approval of the START missile pact.

Obama said "substantial progress" had been made on the first day of the alliance's annual summit in the Portuguese capital.

NATO: Afghans Must Be Masters Of Own House

NATO: Afghans Must Be Masters Of Their Own House

The missile shield "offers a role for all our allies. It responds to the threats of our times," he told reporters.

The U.S. plan for a missile defense system in Europe would be based on a similar existing shield based mainly in North America. Obama said the system would be capable of protecting the territory of all NATO states in Europe as well as the United States.

He said NATO leaders had given him a clear message that the pact would strengthen alliances and increase European security. Final approval of the treaty, signed in April, has been stalled by Republican roadblocks in the Senate.

The pact would reduce the limits on strategic warheads held by the United States and Russia and establish an inspection system.

"Tomorrow we look forward to working with Russia to build our cooperation with them in this area as well, recognizing that we share many of the same threats," the president said.

Obama said that on Saturday, the second and final day of the summit, the leaders gathered in the Portuguese capital will turn to a plan to begin withdrawing troops in Afghanistan as early as next summer and end their combat role in 2014.

NATO Summit At A Glance

A look at some of the items on the agenda for the NATO gathering in Lisbon.

Afghanistan: The focus shifts to training as President Obama assures Europeans the U.S. stays in until 2014. Afghan President Karzai will attend.

Missile Defense: The debate over new protections turns on how clearly to target Iran.

Russia: President Medvedev attends, but some near neighbors of Russia remain nervous.

The leaders are "quite confident of the end-of-2014 timetable for handing responsibility to Afghan security forces," said NATO spokesman James Apparathurai. The withdrawal date was requested by Afghan President Hamid Karzai.

At the opening of the two-day summit, Obama said leaders of the North Atlantic Treaty Organization had gathered in the Portuguese capital to "revitalize" the Cold War alliance.

"We have come to revitalize the NATO alliance for the 21st century and strengthen the partnership between the United States and the European Union," said Obama, who was fresh off a 10-day trip to India, Indonesia and South Korea.

Speaking at a joint news conference with Portugal's president, Anibal Cavaco Silva, Obama said the summit was also "an important opportunity for us to align our approach to Afghanistan."

Obama is scheduled to meet with Karzai on Saturday.

Under the new "transition strategy" conceived by U.S. Gen. David Petraeus, the combat role of American and other Western forces would end in 2014. NATO troops would begin a gradual withdrawal next July, though officials stress that any drawdown is contingent on the ground situation and does not necessarily spell an end to the conflict. They say 2014 is only a goal and that U.S. and NATO troops are expected to remain in the country well beyond that date.

How Obama Can Still Push His Agenda

"We are making clear that 2014 is not a moment [on] which the mission ends. It is just again another big milestone," said Mark Sedwill, NATO's top civilian representative in Afghanistan.

The alliance has 140,000 troops in Afghanistan, two-thirds of them Americans. The government's security forces are being built up to just over 300,000 members. Their Taliban opponents are estimated to number up to 30,000 men.

Former Undersecretary of State Nicholas Burns told NPR on Thursday that it was difficult to envision NATO allies holding with the U.S. in Afghanistan for four more years or longer.

In Europe, he said, there has been "vastly declining public support for the Afghan mission."

"A lot of the promises that were made to the United States that Europe would come to our support through that NATO mission have not materialized," Burns said.

With reporting from NPR's Rachel Martin in Kabul and Eric Westervelt and Ari Shapiro in Lisbon. Material from The Associated Press also was used in this story.