Accessibility links
Movie Review - 'Tangled' - A Fairy-Tale Princess Unleashed Disney's 50th animated film, Tangled, follows a feisty Princess Rapunzel as she escapes from Mother Gothel's tower and travels with a vain thief named Flynn to reach the palace festival -- accompanied by a wise chameleon, a disgruntled horse and her 70 feet of magical hair. 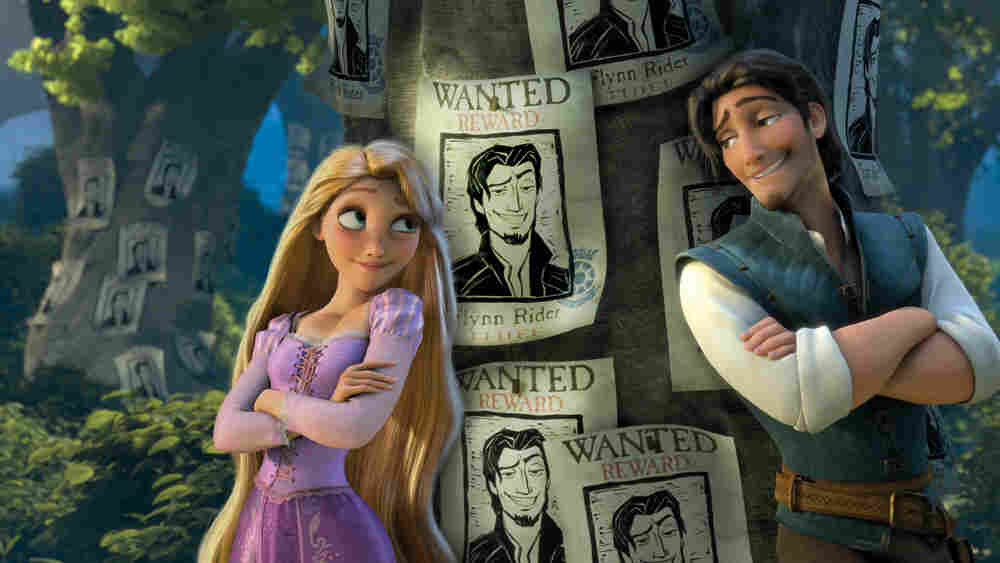 Rapunzel, voiced by Mandy Moore, and Flynn, a wanted man voiced by Zachary Levi, encounter many an adventure as they journey through the kingdom. Rapunzel wants to reach a festival, but doesn't realize she might also find true love. Disney Enterprises Inc. hide caption

Tangled, the new film from Disney, is that studio's 50th animated feature. Has the company learned anything in all that time? It sure has.

Tangled tries to be all things to all animation-loving people: It's a princess story based on the fairy tale Rapunzel, but it adds in lots of stirring adventure for the boys. The film samples so many animation touchstones that it takes a while to find its footing, but it will win you over by the end.

Tangled starts by putting its worst foot forward -- in other words, by introducing Flynn Rider. He's a devil-may-care bandit who spews more glib remarks per minute than a Las Vegas regular.

It's Flynn who fills us in on Rapunzel's history. She's the daughter of a king and queen -- honest! -- who was spirited away as an infant and raised by a devious woman named Mother Gothel. She keeps Rapunzel locked in a tower with only a wise chameleon for company, because contact with Rapunzel's magical hair -- all 70 feet of it -- is what keeps Mother G. eternally young.

Rapunzel, it should be emphasized, is not defined by her hair, as in some versions of the tale. This is a very modern young woman, about to turn 18, and she's especially anxious to get out of the tower and see the world. She and Flynn Rider are clearly destined for each other, but the movie has the good sense not to force that realization on them, or us.

Once Rapunzel gets out of the tower, though, Tangled's core sweetness comes into its own. Animated movies overflowing with smug, hipster dialogue have become a real glut on the market, so it's a holiday treat to find one with the confidence to wear its heart on its sleeve.