Accessibility links
Soviet Nuclear Test Site Now A Model For Safeguards A remote section of Kazakhstan was once the secret testing ground for the Soviet nuclear arsenal. Now, with the help of a $219 million U.S. program, this isolated plain is the perfect place to secure dangerous nuclear material left behind in Kazakhstan by the collapse of the Soviet Union. 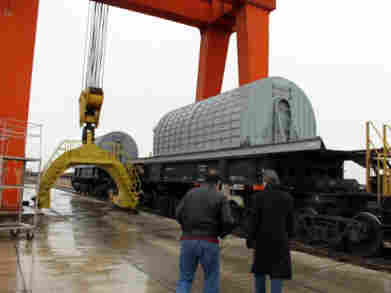 A yearlong project completed earlier this week in Kazakhstan, with the help of the U.S., secured tons of dangerous nuclear material capable of producing nearly 800 nuclear bombs.

The material was left behind in Kazakhstan by the collapse of the Soviet Union and was moved more than 1,500 miles to a remote and secret location never before visited by a foreign reporter.

Inspectors from the U.N.'s International Atomic Energy Agency affixed special seals that certified the complete immobilization of a hundred tons of plutonium and highly enriched uranium now secured at a desolate location on the vast plains of Central Asia.

The isolation of this area made it an ideal place to test nuclear weapons during the Soviet era.

Nobuhiro Muroya, the IAEA's senior official here, remarked on the irony of the region's history Thursday after the final seal was put in place.

"It is a coincidence that in this nuclear test site, it was more than 450 nuclear weapons tested. But this site is at the same time now very safe and very peaceful. And we would like this material to stay calm and peacefully for a long time," he said.

That is the intention of the U.S. and Kazakhstan governments. The storage casks are designed to last half a century.

There were numerous scientific, physical and political obstacles to overcome. The scale of the project was daunting.

"Unprecedented. Nothing like this has ever been attempted anywhere," said Anne Harrington, deputy administrator of the Department of Energy's National Nuclear Security Administration, the lead American agency on the project.

She and other officials from the U.S. and Kazakhstan flew out to the storage site for a ceremony on Thursday.

The United States has spent $219 million on the project, and in Harrington's view, it was a modest price to make sure that a great deal of dangerous nuclear material is no longer vulnerable to theft or attack. 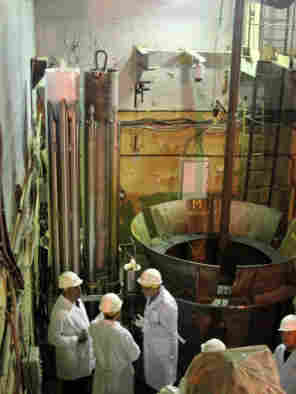 "If you consider that the material could have produced 775 nuclear weapons -- if you divide $219 million by 775 -- that's a pretty cheap price for a nuclear weapon," she said. "And I can't imagine how you would calculate the damage that one nuclear weapon would cause [if it were] set off in a U.S. city, let alone 775."

Kazakhstan's deputy foreign minister, Kairat Umarov, said the value of the project extends far beyond the borders of his country. "There are some groups in the world which would like to use this kind of material for producing dirty bombs. So if we are securing it, then we are securing it not only for ourselves, but for the rest of the world as well," he said.

Umarov was an anti-nuclear activist in the late 1980s, pushing for the closing of the Soviet nuclear test site at Semipalatinsk.

The Soviets carried out hundreds of nuclear explosions with little concern for the welfare of the people living nearby, says Richard Hoagland, the U.S. ambassador to Kazakhstan.

"The nuclear tests of the Soviet Union -- whether they were aboveground or underground, close to 450 tests -- were conducted on the territory of Kazakhstan. Hugely polluted, a very large portion of the country, and to this very day, there are still people who are physically suffering from the results of that," Hoagland said.

Kazakhstan President Nursultan Nazarbayev closed the test site in 1991, even before the breakup of the Soviet Union. Since then he has actively pursued policies to contain the spread of nuclear weapons and materials.

And so now most of Kazakhstan's plutonium and highly enriched uranium are beyond the reach of those who might covet them.

"This is now truly secure. And there's no question about it," said Leonard Spector, a former Energy Department official now with the James Martin Center for Nonproliferation Studies in Washington.

"This is not something that the Iranians or others may be keeping an eye on, wondering if they can grab it someday. That's over. This stuff will never be available to another country," he said.

Around the world there is dangerous nuclear material that is not secure. The hope is that the Kazakhstan example will help to persuade other governments to take the same approach.