Accessibility links
Billie Holiday: Emotional Power Through Song Holiday became famous after she recorded "Strange Fruit," a 1939 protest song about lynchings of African-Americans. The haunting vocal offers a stark illustration of her greatest gift -- the ability to convey emotion. 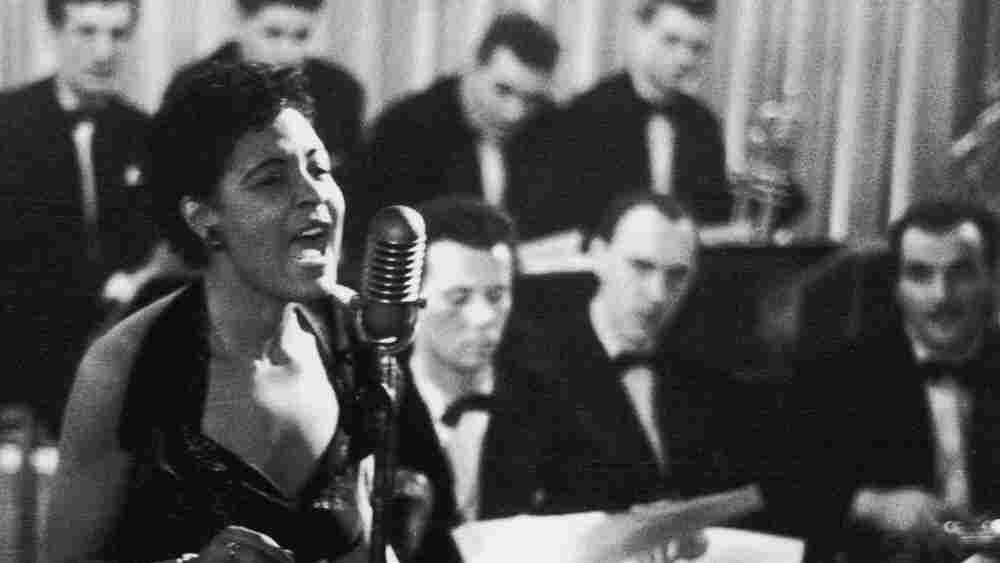 Billie Holiday has one of the most distinctive voices of all time; her very personal style continues to inspire singers decades after her death in 1959. Holiday herself was inspired by great musicians she heard growing up, and it's those influences that helped her become one of the most beloved singers ever.

Holiday became famous after she recorded "Strange Fruit," a 1939 protest song about lynchings of African-Americans. The haunting vocal offers a stark illustration of her greatest gift — the ability to convey emotion.

Phil Schaap, curator of Jazz at Lincoln Center, says Holiday "speaks to your heart. She catches your ear. She reaches your mind, and she does this with an emotional power that, of course, is genius and is beyond words."

The emotional power of Holiday's vocals comes from the way she sings the melodies. It's about rhythm and phrasing, which Holiday learned from listening to the best.

Holiday was born in Philadelphia in 1915, and was raised in Baltimore. As a girl, she loved music, and her idols were Louis Armstrong and blues singer Bessie Smith.

To hear those 1920s records, Holiday needed a Victrola, and the only place she had access to one was Alice Dean's whorehouse, where as a girl Billie worked scrubbing floors.

"A Victrola was a big deal in those days, and there weren't any parlors around that had one except Alice's," Holiday wrote in in her autobiography, Lady Sings the Blues. "I spent many a wonderful hour there listening to Pops and Bessie. I remember Pops' recording of 'West End Blues' and how it used to gas me. It was the first time I ever heard anybody sing without using any words."

Schaap has studied Armstrong's influence on Billie Holiday closely. He's been demonstrating how Holiday mimics Armstrong's phrasing on his radio shows at Columbia University's WKCR for some 30 years.

Like a scientist in his laboratory, Schaap, in a WKCR studio, takes Armstrong's and Holiday's versions of the same song, recorded in the same year, 1937. Then he adjusts the turntable pitch controls to speed up Armstrong's vocals and slow down Billie's, so that their voices are closer in pitch.

Schaap says if you listen closely, you can hear how similar the phrasing is — how Holiday literally learned how to sing and swing at the same time from Armstrong.

"Well, that was Billie Holiday doing Louis Armstrong," Schaap says. "And I think you can hear it. She gets so much from Pops."

Singer Joni Mitchell says her two favorite singers are Edith Piaf and Billie Holiday because of the way they use their technical gifts as singers to tell meaningful stories.

"I think I took this from Billie and Piaf, that many of the so-called great singers love their notes more than their text," Mitchell says. "And those women never forgot what they were singing about, so that the note almost played second position to the text. Not that there was anything wrong with the chosen notes. There was still beauty to them, but the emphasis was on telling the story from the heart."

Holiday had plenty of stories to tell, and enough heartache to fill a songbook: years of heroin addiction, a stint in federal prison and a series of abusive relationships with men. She was just 44 years old when she died.

Schaap says too much emphasis has been placed on the tragic aspects of Holiday's life, and not enough on the glorious aspects of her voice.

"She swings and invents," he says. "She innovates. She can compose on the fly, she can make you hear the rhythm section if it's not there, and make them play better if they are. And I think that's it. I think Billie Holiday is the greatest."