Accessibility links
Lack Of Drilling Permits Hurts Small Energy Firms The government's slow pace in issuing drilling permits for the Gulf of Mexico comes despite the Obama administration lifting its deep-water drilling moratorium last month and the shallow-water moratorium in May. 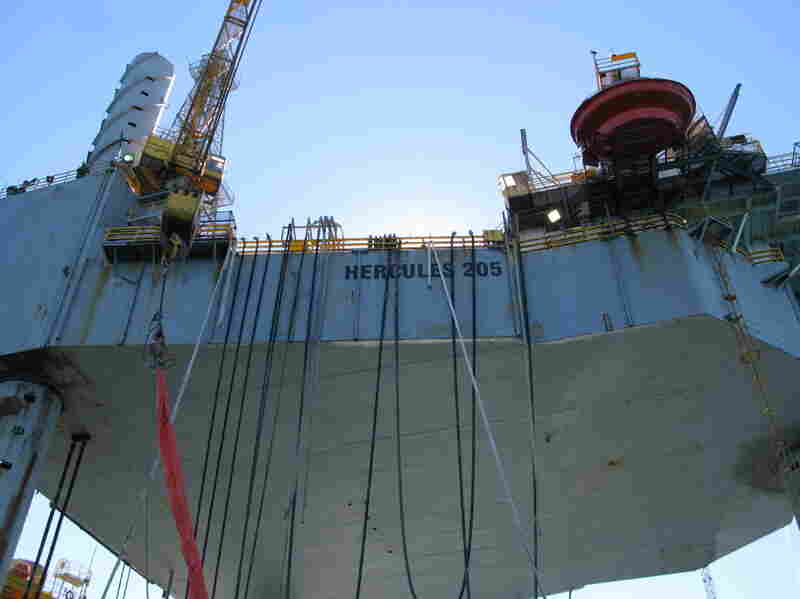 Interior Secretary Ken Salazar will meet with oil industry executives in Houma, La., on Monday. The big topic will be the government's slow pace in issuing drilling permits for the Gulf of Mexico, despite the Obama administration lifting its deep-water drilling moratorium last month and the shallow-water moratorium in May.

It's not the big oil companies hurting now. The Gulf of Mexico is just one sliver of their worldwide portfolios. It's the smaller companies that rely more heavily on the Gulf. Among them is Hercules Offshore.

About 25 miles from Aransas Pass, Texas, the huge Hercules 205 shallow-water jack-up rig is sitting in about 100 feet of water. It's not drilling any wells right now because Hercules' customers can't get permits.

Workers are performing maintenance -- spraying away rust and old paint on the drill floor. Down below, welders are repairing some steel plating, and work will begin soon to replace showers in the bathroom.

In the galley, assistant driller Bobby Waguspack says this is an uncertain time.

"If you don't know you [are] going to have a job the next week, it affects your mind, you know?" he says.

This crew typically works and lives on the rig for a few weeks and then has a few weeks off. Waguspack says even his home time has become stressful.

"You don't know if you're going to get a call saying, 'Well, you know, we might have to bump you down as a roustabout or roughneck or something,' " he says. 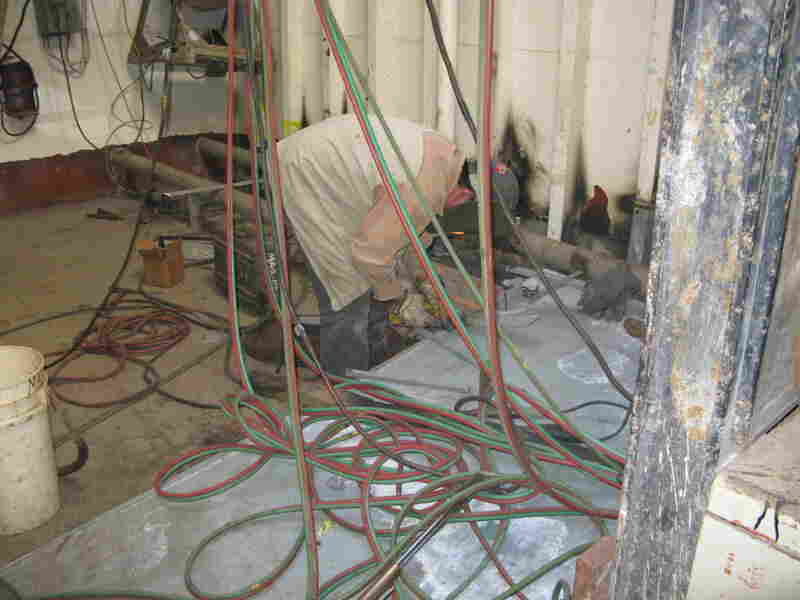 Welders on this Hercules drilling rig are making repairs while the rig is on standby, waiting for the government to issue new permits to drill in the shallow waters of the Gulf of Mexico. Jeff Brady/NPR hide caption

Just about everyone here is worried about getting laid off.

Hercules Offshore has lost more than half of its stock market value since BP's Deepwater Horizon accident last April, though the work Hercules is doing here isn't nearly as complicated as drilling in the deep waters of the Gulf.

"We're using technology that we've been using for decades -- safely and without incident," he says.

It looked like the Obama administration recognized this, too -- at first. The shallow-water moratorium lasted less than a month.

"And yet we've been facing what we've called a de facto moratorium because the Obama bureaucrats won't issue permits," Noe says.

Historically the government approved 10 to 15 shallow-water drilling permits a month. But now, that number has fallen to almost none.

"We don't think it's slow enough," says Jackie Savitz, senior campaign director and senior scientist at Oceana, a conservation group. "We think they should come to a complete stop with permitting offshore drilling."

Savitz says it's clear why regulators are moving so slowly.

"We can't afford to go easy on safety requirements, otherwise we end up losing lives and creating uncontrollable disasters in our oceans," she says. 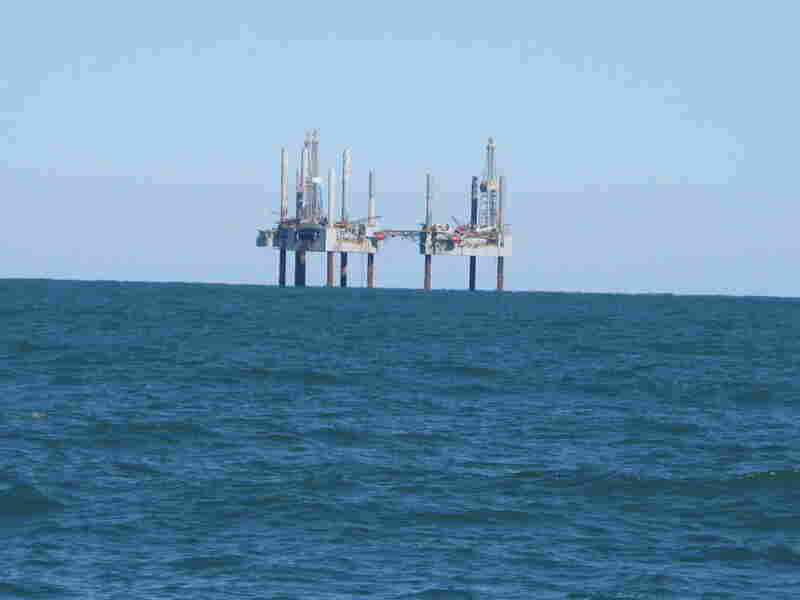 Three Seahawk Drilling rigs that are "cold stacked" in the Gulf of Mexico off Aransas Pass, Texas. Seahwak recently indicated in SEC filings that the company has been hurt by the slowdown in drilling in the Gulf of Mexico and by low natural gas prices. Managers are exploring options that could include selling the company, a merger, selling assets or a recapitalization plan. Jeff Brady/NPR hide caption

But what Savitz sees as taking extra care to protect people and ecosystems, others see as outright hostility from the Obama administration.

"Everything they've done since this incident indicates to me that they don't like the oil and gas industry, and this was a good excuse to punish it," says Randy Stilley, CEO of Seahawk Drilling.

His company recently put out an SOS of sorts, announcing that Seahawk was looking for a buyer or to raise capital to avoid running out of cash.

Last week Sen. Mary Landrieu (D-LA), a longtime friend of the oil and gas industry, agreed to lift her hold on one of Obama's nominees. In return, Salazar is headed to the Gulf to get an earful from industry executives.

"I received a commitment from Interior Secretary Ken Salazar to provide certainty and regulatory clarity to an industry that has operated in the dark for months with shifting rules," Landrieu said on the Senate floor.

"Knowing Sen. Landrieu like I do, I'm sure she believes that she has a commitment," Stilley says. "Now let's see if we actually have one and we see some results."