Accessibility links
From Las Vegas, Wayne Newton Plays Not My Job We've invited the Las Vegas entertainer to play a game called "Hey, wait a minute ... you don't have a delicious fig filling!" Three questions about other Newtons. 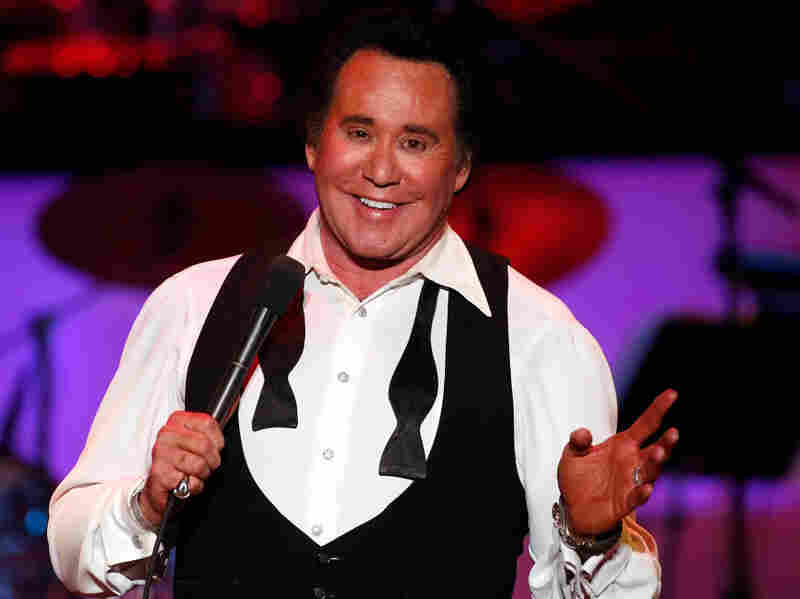 Las Vegas-based singer and entertainer Wayne Newton has performed tens of thousands of shows, and while he may be the most famous Newton in Vegas, there are other Newtons out there, you know.

So we've invited Wayne to play a game called "Hey, wait a minute ... you don't have a delicious fig filling!" Three questions about the world's other Newtons.

And now, the game where we invite on big stars and ask them little questions.

SAGAL: When we think of Las Vegas, we immediately think of three things. One will bankrupt you; one will get you arrested. But the third is Wayne Newton.

SAGAL: He has performed tens of thousands of shows here and around the world. Wayne Newton, Mr. Las Vegas, welcome to WAIT WAIT...DON'T TELL ME!

SAGAL: So, not the first time you've been on a Las Vegas stage.

NEWTON: No. As a matter of fact, I've been on most of the stages. And frankly, when they started to implode the hotels...

NEWTON: ...you know, I was really upset when they imploded the Sands.

SAGAL: Right. Now, this is one of the old casinos.

KASELL: Yeah, because I was onstage at the time.

SAGAL: Really? So you really brought the house down. Did you...

SAGAL: So when did you first play Vegas?

SAGAL: You were still in school, I remember.

NEWTON: Well, not really. By the time I got here is when I started school.

NEWTON: I think there is. I think there is a style of performing that by virtue of doing it every night, you either get it right or you have a heart attack - or they shoot you. It's one or the other.

PAULA POUNDSTONE: Do you get to pick?

ADAM FELBER: At the end of every show.

NEWTON: No, you really don't get to pick.

SAGAL: Because I know some entertainers in town like, get this sort of cultish following - people who devote themselves just to that performer. Has that ever happened to you?

NEWTON: What's wrong with that?

SAGAL: I've been looking for it my whole life, but it hasn't worked out yet. You know, did you have a name for your fans, like the Waynettes?

NEWTON: As a matter of fact, they call themselves Wayniacs.

SAGAL: There we go.

SAGAL: So you played - you were here during the great old "Oceans 11" days with the rat pack and Frank and those guys, and Dino. And you've also, you know, survived into the new Vegas, with the huge casinos and the themed casinos, and the corporations running the town. Which do you prefer?

NEWTON: ...Las Vegas was more personal in those days. There was a camaraderie among performers like Frank and Dean, and Sam and Elvis, and Bobby Darin, and on and on and on - that really doesn't exist anymore.

SAGAL: Was it weird being so young? Because you were a teenager, as you said, when you started in Vegas.

SAGAL: Was it odd being a kid, hanging around here?

NEWTON: I didn't know. I mean, the truth of the matter is, I came here, I got hit with six shows a night, six nights a week. And that's about all you have energy for.

SAGAL: You started performing - I had no idea this was true, at the age of 6?

SAGAL: So from 4 to 6 were your amateur days.

SAGAL: Just doing it for the love of it. At 6, it became all about the money.

SAGAL: Okay, you're known - your signature song, "Danke Schoen," how did that come to be your song, the Wayne Newton song?

NEWTON: The song was meant for Bobby Darin to record.

NEWTON: And Bobby had seen me on "The Jackie Gleason Show," which was my first national television show, in 1963. He came in to the Copa Lounge, where I was appearing, and he said, are you recording this? No, sir, I'm not. And he said, you are now. Bobby has received "Danke Schoen" for him to follow "Mack the Knife" with.

NEWTON: And he said, I want you to have this song. And he had an acetate record of it - a demonstration record - which you would play at 33 and a third, for those of you who remember those days.

NEWTON: And Bobby said, I'm going to show you how this will sound now when you record it - because the acetate had been sung by a German baritone singer. So he sped it up to 78 RPMs.

NEWTON: And that's exactly how I sounded.

SAGAL: Okay, so tell us about your house, which has been in the news lately.

SAGAL: And tell us about what that place is like.

NEWTON: It's about 50 acres. We have Arabian horses. We have penguins. We have wallabies. We have all kinds of birds, swans...

SAGAL: I'm sorry, I stopped listening when you said penguins. You have penguins?

NEWTON: They love it.

SAGAL: They do. Really?

NEWTON: Yeah, they're from South Africa. And most people don't realize - and I know this is probably not the forum - but of the 52 species of penguins in the world, there are only three species that are Arctic penguins.

FELBER: It's a stereotype.

FELBER: This is so awkward because whenever I have penguins over, I crank up the air-conditioning.

FELBER: I feel like I was being so insulting.

NEWTON: But that's why they die on you - or close by, anyway.

FELBER: I thought it was my cooking.

SAGAL: You have a menagerie.

SAGAL: You have Arabian horses, you have penguins, you have wallabies.

NEWTON: Horses, dogs, cats, chickens. We have chickens that have been thrown over the fence.

FELBER: Your dogs must feel so inferior. Like, they're the best pet in anybody else's house. And this dog is - looking at it, going oh, there's a crested thing over there and I'm just a...

NEWTON: Now, you can speak plainer than that, come on.

SAGAL: Well, Wayne Newton, we are delighted to have you with us. We have asked you here to play a game entitled?

"Hey, Wait A Minute - You Don't Have A Delicious Fig Filling."

SAGAL: The point is, you may be the most famous Newton, but you're not the only one. We're going to ask you three questions about other Newtons. If you get two right, you'll win our prize on our show, Carl's voice on their home answering machine. Carl, who is legendary entertainer Wayne Newton playing for?

SAGAL: There you go. Let's start right in with the Fig Newton. In the mid-'70s, Nabisco tried to market the cookie how? A, creating a dance craze called the Big Fig Newton; B, starting a beauty contest, Miss Fig USA; or C, rolling out a new ad campaign with the slogan: Why Not Just Stuff It?

SAGAL: You're right. You remember that?

SAGAL: I remember that.

NEWTON: It was a good guess though, huh?

POUNDSTONE: It was a very good guess.

SAGAL: It was a very good guess.

POUNDSTONE: It was a skilled guess.

SAGAL: All right, that was good. That was good, Wayne, but here we go. Your next Newton is the Apple Newton. It was one of Apple's only failures, back in the '90s. It was a precursor to like, the Palm Pilot, a personal digital assistant. People remember its handwriting recognition software, which never seemed to work. But where did this software come from, is the question. Where did the handwriting recognition software come from? A, it came to their senior programmer in a dream, but he was interrupted before he could write the whole thing down.

SAGAL: B, it was delivered by an anonymous Russian programmer who came to an Apple exec's hotel at midnight, then disappeared forever; or C, Steve Jobs was inspired to created it in order to decipher his own doctor's handwriting?

NEWTON: Definitely the first one.

SAGAL: The first one?

NEWTON: The first one.

SAGAL: It came to the senior programmer in a dream, but he was interrupted before he could write the whole thing down?

SAGAL: You're very confident but no, not in this case, you're not correct. It was, in fact, the anonymous Russian programmer.

SAGAL: According to the story, an Apple VP was in Moscow when he heard a frantic knocking on his door. He opened it to find a programmer who handed him a disk, and then fled. That software became the basis for the Newton's handwriting recognition. A true story.

FELBER: Please take this, it will bring your company to its knees. Bye.

SAGAL: Well this is very exciting because you have one more question to go. If you get this right, you win it all. The last Newton, of course, Olivia Newton John.

FELBER: Wow, I really thought we were going for Juice Newton on this one.

SAGAL: No, no - well, we thought of her. Do you know Olivia Newton John?

NEWTON: Very well, yes I do.

POUNDSTONE: Was she related to you before she married Mr. John?

SAGAL: She's done a number of great duets in her career, including which of these, just recently: A, she sang "Summer Nights" with one of the rescued Chilean miners?

SAGAL: B, with Michelle Obama, she did "Let's Get Physical," in a PSA about exercise? Or C, she sang with Olivia Newton-San, the Japanese cross-dressing Olivia Newton John impersonator?

SAGAL: You're going to go for Mrs. Obama?

NEWTON: I think so.

SAGAL: You sure about that?

NEWTON: I believe it's Mrs. Obama.

SAGAL: This is the Chilean miner...

SAGAL: Mr. Pena. He's the guy who sang on Letterman.

NEWTON: Was this before or after?

SAGAL: No, this was just after.

SAGAL: She didn't go down in the mine. That would have been amazing if like, they're down there, and the rescue capsule appears and opens up, and it's like, it's Olivia Newton John.

SAGAL: They sent her down here. That would have been great. But no, he's a big singer and she was there doing a concert, and he came up and they did "Summer Nights" together. It was, apparently, great.

FELBER: That's odd, because all he met all summer were other miners.

SAGAL: So Carl, how did Wayne Newton end up doing on our quiz?

SAGAL: That's the first time you have not succeeded on a Las Vegas stage.

NEWTON: Well, it's probably the first time it's been broadcast nationally.

SAGAL: Wayne Newton, thank you so much for being here.