Accessibility links
Try Foraging For Your Thanksgiving Meal The Thanksgiving drill is pretty familiar: turkey, stuffing, pumpkin pie. But what would Native Americans have brought as sides? Turns out your backyard might have something tasty to contribute to this year's feast.

This leafy plant has flowers that open near evening and wilt the next day. The roots are a little peppery, like a radish. Jerusalem artichokes are a native root considered among the best wild plants. Native Americans often pickled them. Bayberry shrubs are highly aromatic. The leaves and nutlets are used for seasoning. Boiled, the nutlets produce a wax that can be used to make aromatic candles. The spicebush has a spicy scent and is used for tea as well as seasoning. 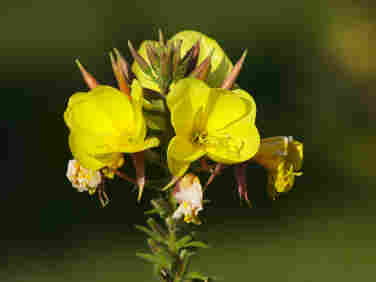 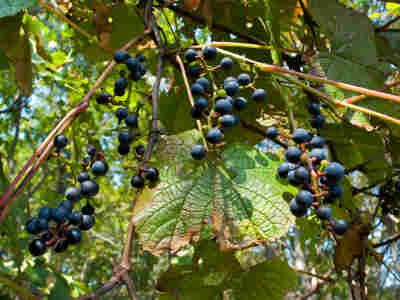 Wild grapes can be found in thickets and the edge of woods. They can be used in any recipe calling for grapes but may require a little more sweetening.

Try to pick wild grapes before the first light frost. Stem and wash them, then cover them with water in a large covered pot and bring to a boil. Simmer 30 minutes or until their skins pop. Stir and mash the grapes as they cook. Pour off the grape juice, which you can sweeten with honey, and drink (it's delicious).

Sieve the remaining grape pulp to remove the seeds and puree. Add an equal measure of maple sugar or honey, blending all in an ovenproof pot. Bake, stirring occasionally, for 3 hours. Seal in hot, sterilized jars.

The Thanksgiving drill is pretty familiar: turkey, stuffing, pumpkin pie. But what would Native Americans have brought as sides?

It's a brisk, clear morning at Adkins Arboretum, a peaceful 400-acre preserve on Maryland's Eastern Shore. I meet Bill Schindler, an anthropology professor at nearby Washington College, and Bill Trakat, a mycologist -- that's a mushroom guy -- to wander along streams and through meadows looking for something to eat. Right away, Schindler finds some tasty-looking weeds.

"One of the earliest wild plants that we think Native Americans began domesticating around here is Chenopodium berlandieri, which is lamb's-quarters," he says. "They grow all over. The greens are fabulous. But the seeds are also very healthy and full of wonderful proteins and oils."

Down in a marsh, we find both narrow- and broad-leaf cattail. The stalks of the young plants taste like cucumber, Schindler says. "Then later, in the spring, eat the pollen."

"There are some great plants that grow in the marsh," he continues.

We haven't seen many mushrooms -- then Trakat finds a little rusty-red one.

"It's a brown cortinarius," he says excitedly. An edible find, he says, though not very tasty.

Both Bills caution about eating anything you're not sure about. Some mushrooms are poisonous, and other wild plants need toxins boiled out. Not the wild grapes that Schindler spots, though.

"The juicier ones are still pretty good," he says, munching on a few. "You can always tell the grapes – [they're] the only ones that have these curly-cue-looking things coming off the vines."

We walk through a patch of what look like more little green weeds. Schindler points out sheep sorrel. "It's supposed to somehow look like a sheep's head." It tastes somewhat like regular sorrel, a little lemony. "They're great in salads," Schindler says.

Dead milkweed proves to be delicious. "This is the end of this year's life for a milkweed," Schindler says. "Young milkweed shoots are fabulous, and then you can eat the flower clusters. You can eat the seed pods when they're young," he adds. "They're great. You can boil them."

Naturally, Schindler has a trowel in his pocket. He digs up an evening primrose root, cleans it off and passes it around. It tastes like a radish.

"If you come at this wild plants thing from our modern perspective on food, you're not going to enjoy a whole lot of it," he says. "And you're not going to have a huge variety of things you're going to want to try. A lot of the plants we eat have been domesticated down to where they've lost a lot of their flavor."

But keep an open mind. The woods are an open-air food court. A lot of what you see -- or step on -- is edible. So as an alternative to the green bean casserole, why not try lamb's-quarters cooked with a little hickory nut butter and wild onion this holiday?

Lamb's-quarters is a wild relative of spinach. Tiny black seeds are highly nutritious and used as seasoning, cereal or flour additives. Many nuts and seeds were made into a paste, or butter.

Combine all ingredients in a covered saucepan and simmer for 5 minutes, or until the greens are tender. Serve hot. 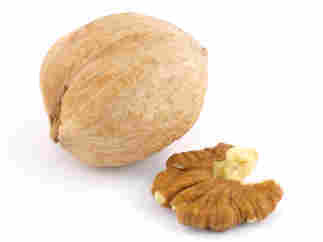 Hickory nuts are a staple ingredient in much Native American cooking. The nuts can be made into flour or pounded, boiled and strained, leaving an oily rich liquid like fresh cream. The leaves and flowers of the goldenrod have an anise flavor.

Preheat oven to 350 degrees. Combine all ingredients thoroughly and pour into a well-greased casserole dish. Sprinkle the top with additional hickory nut meats and bake for 1 hour. Serve hot.

Nut Butter
Grind 1 cup or more of shelled dried nuts into a paste using a mortar and pestle, blender or food processor. Many pastes are sweet enough, while others may require a little honey or maple syrup. Keep refrigerated.